The weather on Thursday was beautiful, but the start was very chilly; when I set of at 7.45 it was still 0 °C.  The max was 16 °C and sunny blue skies all day.  The water in the hose from the tap to the caravan froze so I had to use the caravan tank water, the first time that has happened to me.  I’m glad the van was coupled up as my hands were freezing just lowering the roof and packing up the power lead and water hose.  I also had to de-ice thick ice from the windscreen.

The drive to Wagga Wagga was though farming country and everything was green and the crops looked good, which was the same on the next phase to Narrandera.  The water tower at Wagga is on top of Willans Hill which overlooks the city.  I’m glad I came in from the southern end of Captain Cook Drive as the descent I exited by would have been a very steep climb with the caravan, I had the car in first gear all the way down.  The view over the city was extensive but it was a bit foggy so no photos.

The theme of the tower was water but there were no information boards to explain the thinking.  This photo shows all the artwork. 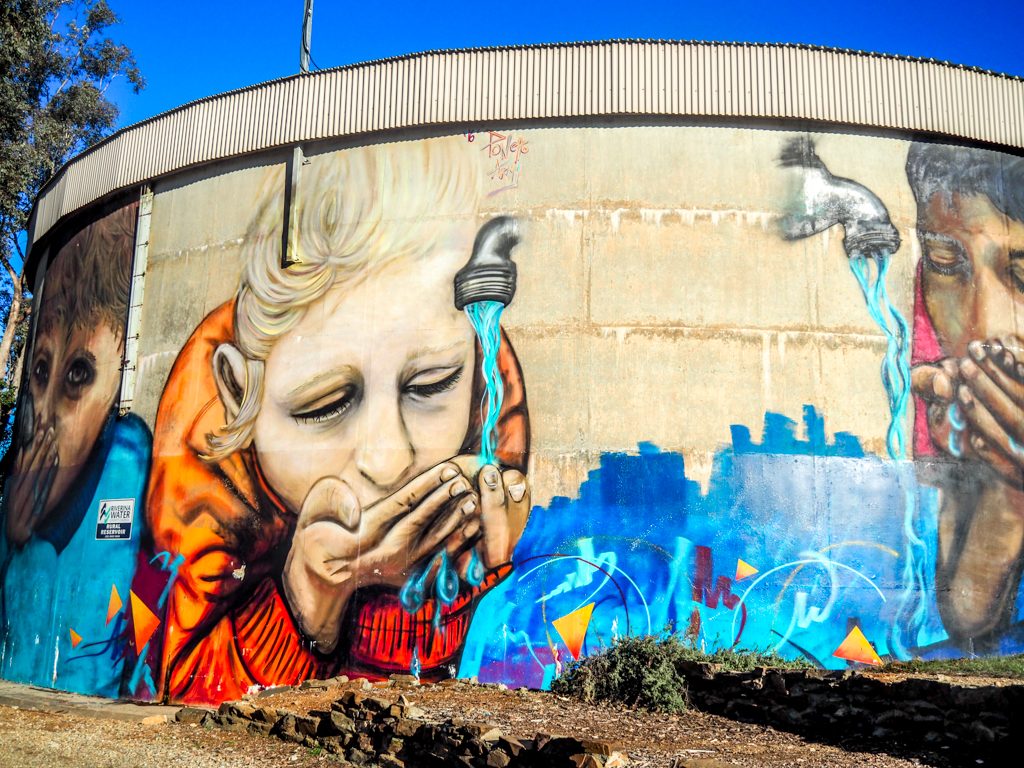 I took a couple of other photos of the two boys. 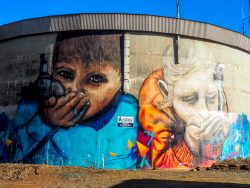 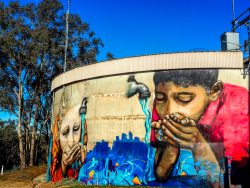 The Narrandera tower was at the top of a hill with a view over the town.  It was interesting to learn that Narrandera is an aboriginal word for “place of many lizards” hence one of the artworks was of a frilled neck lizard. 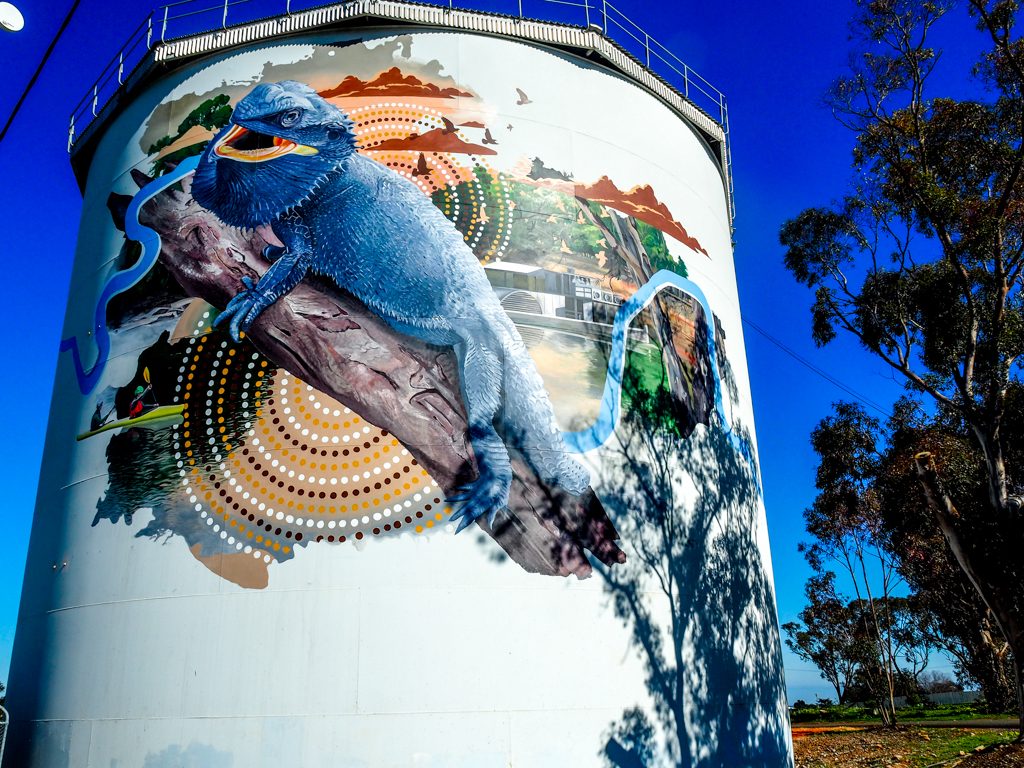 The Koala was chosen because Koalas were common in the area at settlement, but the Koala population had been wiped out by 1950 through hunting for the fur trade.  Community action in 1972 saw four Koalas put into a reserve and a few more added in the next couple of years.  They are now very well established and have spread up to 100 Km from Narrandera, a real success story. 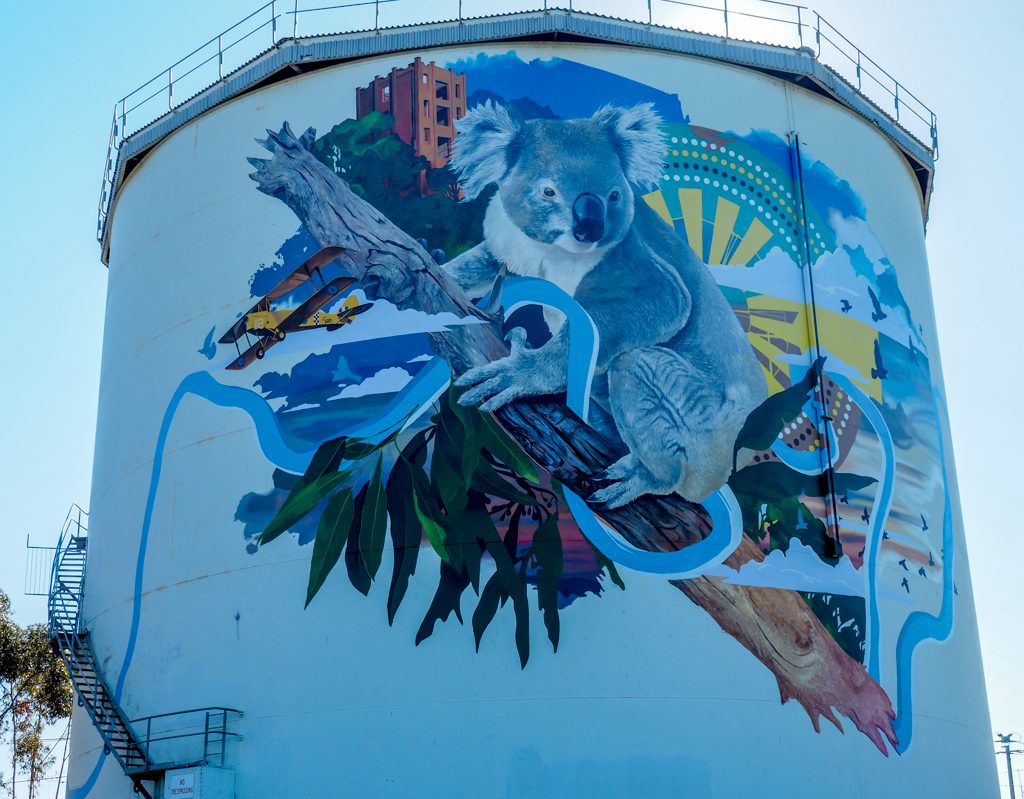 The blue line weaving around the tower represents the Murrumbidgee river which flows through the town.  The tiger moth is part of the towns history as they were used at the RAAF base in the town in WW2 for initial pilot training.

Next stop was a Weethalle, this time for silos rather than water towers.  On the way I went through Barellan and dropped into the pub for lunch.  The only sign that meals may be available was a chalk board with “Kitchen Open” printed in chalk at the top of the board.  The barmaid didn’t know the cook’s name, she had to ask the owner, on her way to get him to explain what was available – pizza, spag bol, fish and chips and beef schnitzel with chips.  When I asked for salad he explained he had only been there two days so no salad.  Still the fish and chips were good.

The silos at Weethalle had a farming theme and were very well done: 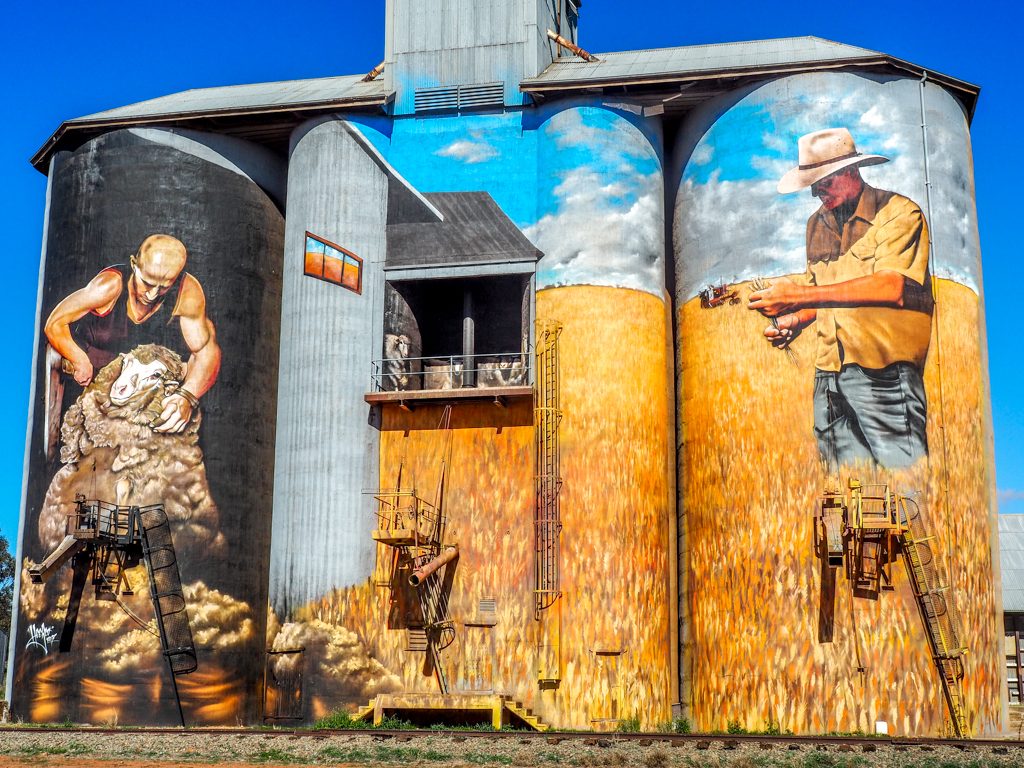 I especially liked the shearer: 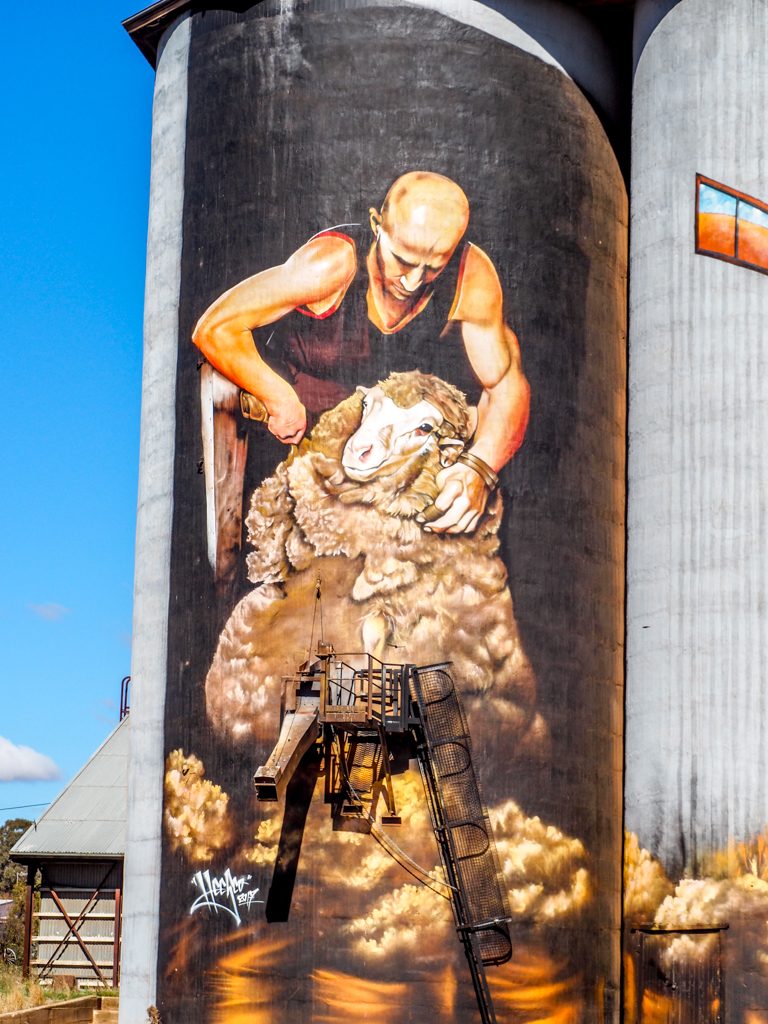 I’m off to Bathurst tomorrow where it is forecast to be -2 °C overnight both nights, I’m glad I have a heater and electric blanket, but I may throw another blanket over the doona (I turn the electric blanket off at night).  Tonight in West Wyalong it will be -1 °C, so maybe it will be a late start!  I will have to drain the water hose before I go to bed.