Wednesday now and I’m heading for Lockhart via Deniliquin, a 380 Km trip that would be only 200 Km without the diversion to visit the Deniliquin water tower.  I woke early so I got up, (I thought about a snug shower in bed but decided it wouldn’t work),had a shower and was on the road by 7.30.  It was an easy drive, but the GPS wanted to take me a different way, so at one stage I had the car GPS, the Tom Tom GPS and Google maps giving me directions and they were all different.  I had checked the way I wanted to go the night before so I knew which GPS to follow at each turn.  I was interesting the Google Maps wanted me to go done narrow dirt roads and also through shut gates.  The estimated time on Google maps was about 3 times what it took.

NSW is green like Victoria, but the grass and crops are much lower than in Victoria so cit would seem they have had less rain.  The water tower at Deniliquin was a very good one also painted by Cam Scale who did the Devenish silos in Victoria, which were also very good. 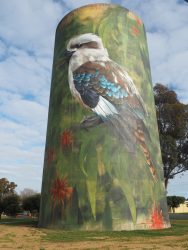 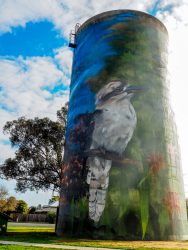 The next stop was at Lockhart where I would stay overnight at a council caravan park, it is well set up with 4 new individual toilet/shower rooms for us to use and flat grassy sites.  Of course there is the necessary power for the heater and electric blanket.  The water tower in Lockhart was decorated in paintings of birds, which were all very well done.  It was painted by Blue Mountain artists, Scott Nagy and Janne Birkner (Krimsone) and has a waterfall in the section where the parrots are painted. 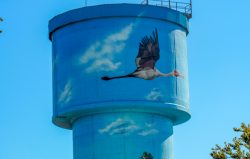 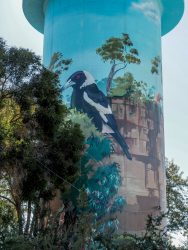 The tower is in a small garden and has some small trees and buildings next to it so as you approach you see a stork painted on the top of the tower and that excites your interest to see the rest.  The next bird you see is a magpie, both birds are in the photos above. 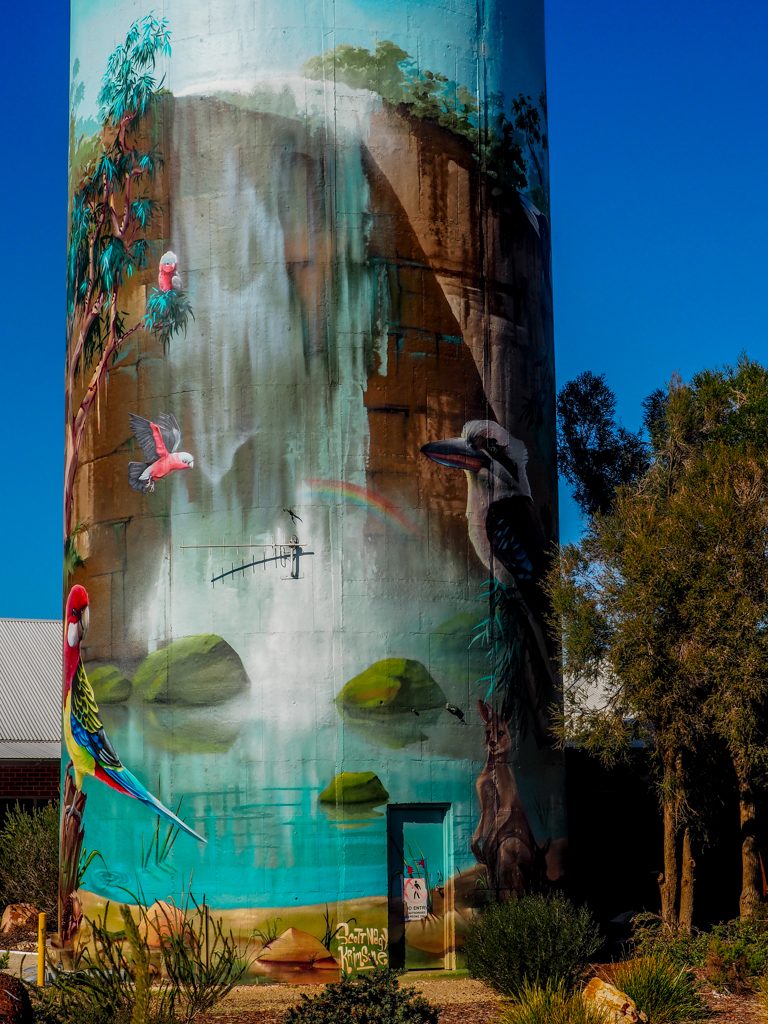 The above photo shows the an Eastern Rosella, a couple of Galahs and a Kookaburra with a waterfall in the middle.  The painting of the Eastern Rosella was excellent, so realistic. 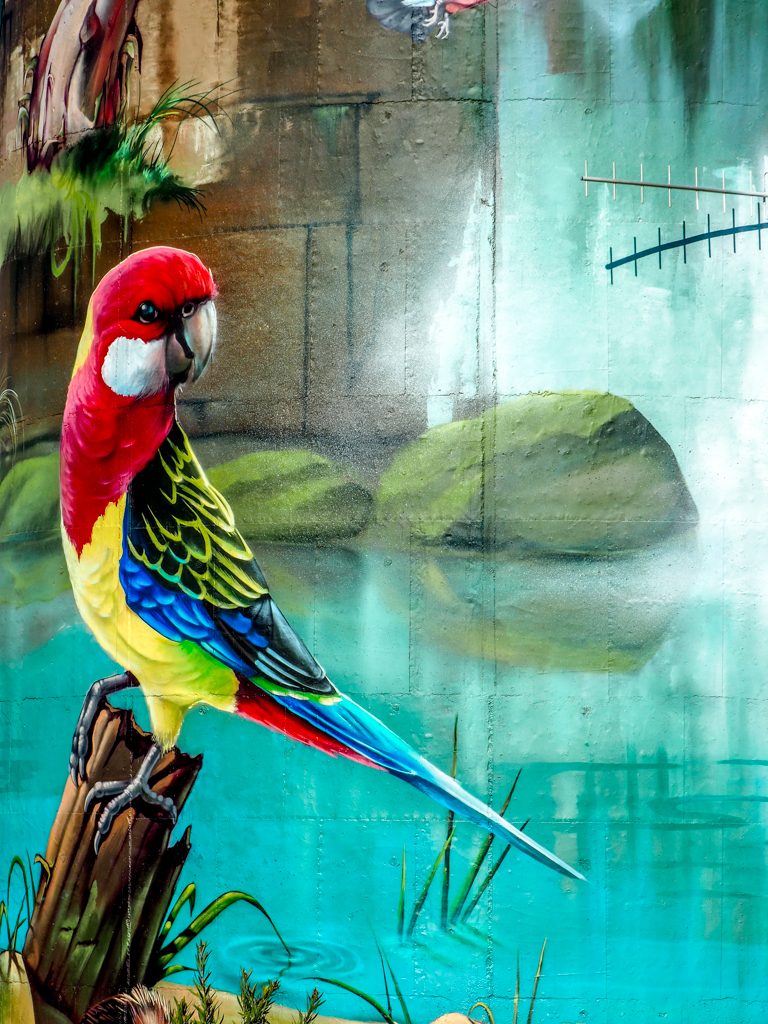 The galahs were not too bad either! 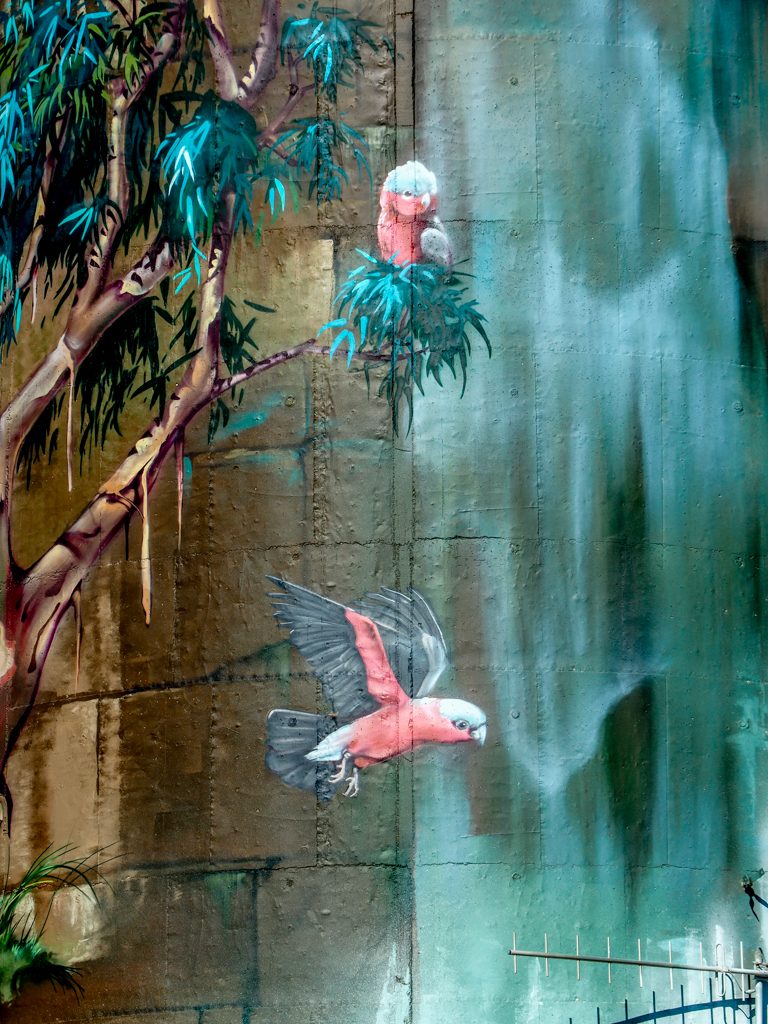 The small garden around the water tower had three sculptures and I especially liked the cocky and the two emus. 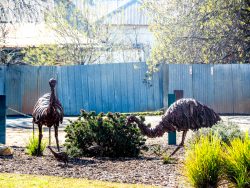 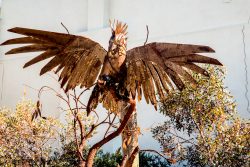 Tomorrow, Thursday, I am off on a circuitous journey to Wagga Wagga, Narrandera to then finish overnight at Weethallo where there is also silo art to view.