On Friday I moved on from West Wyalong to Bathurst where I will stay for 2 nights.  It was interesting to see that the crops were quite stunted but still green, in contrast the grazing lands were mainly brown with faint tinges of green.  It would seem the rain in NSW has been quite patchy, with some areas getting little rain.

The only silo on the way to Bathurst was at Grenfell where Margie broke her wrist tripping on a footpath discontinuity on the third day of a 2 month holiday.  She was taken by ambulance, a painful journey, to Orange hospital where they fixed and set her wrist.  I was eventually able to get a good settlement from the insurers for the caravan park.

The lady who painted the silo took 5 weeks and used 180 litres of paint plus 800 paint spray cans.  The silos are owned by a company run by locals who financed the painting as a legacy to Grenfell.

The silo art reflects the farming nature of the shire and has the Weddin Mountains National Park in the background.  We had a great day in the national park including the usual picnic lunch, visit to Ben Halls Cave and a visit to an early farm where the dirt floored cottage and farm sheds and equipment were still in place. 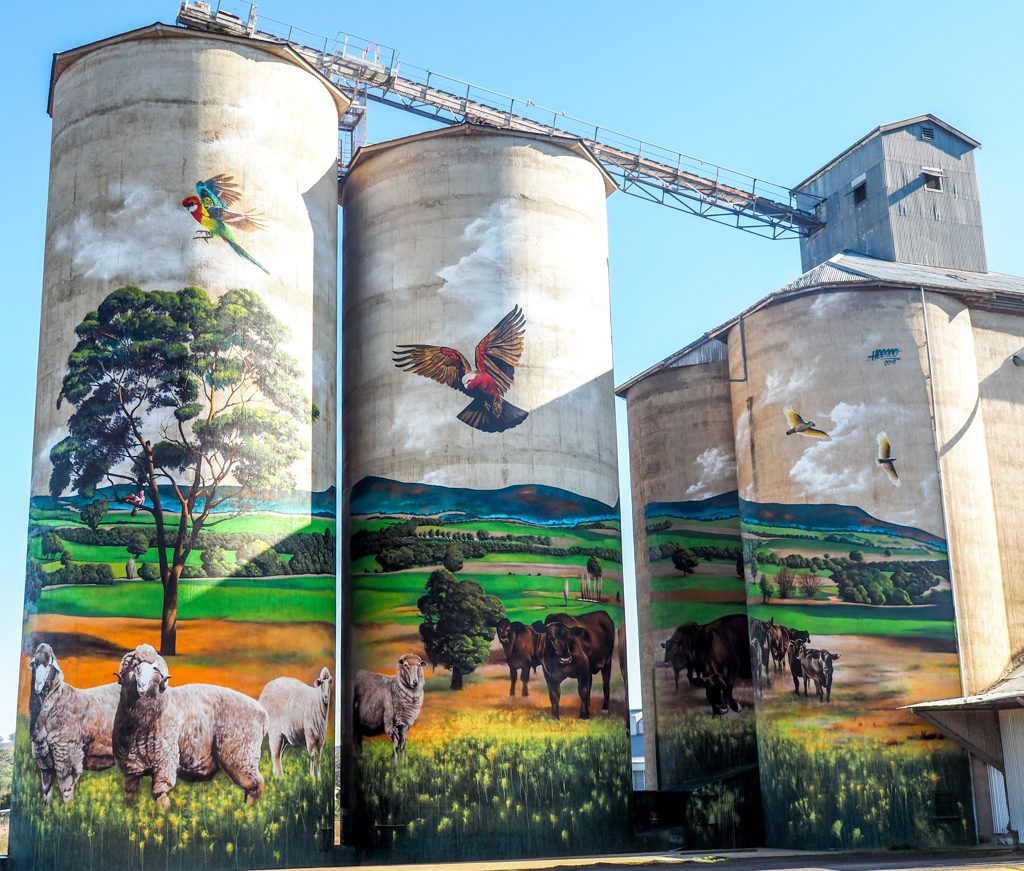 The sheep were so realistic you felt you could touch them and feel the wool, the cows were also very real.  In the photo of the cows the lines down the photo are from where one silo meets the next, the middle silo is in shade. 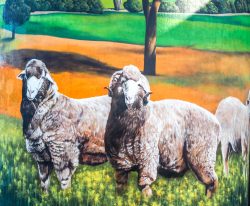 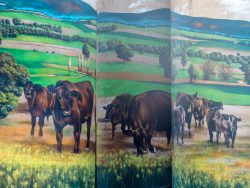 At Bathurst I stayed at the showgrounds where there are no facilities except an old but clean amenities block; but only $25 a night with power and water on the power sites.

I visited the cement silos in Portland on Saturday.  The cement we use today is called Portland Cement but not because it was made in Portland.  The cement name is derived from its similarity to Portland stone, a type of building stone quarried on the Isle of Portland in Dorset, England.  In his 1824 cement patent, Joseph Aspdin called his invention “Portland cement” because of the its resemblance to Portland stone.

Portland is about 50 Km from Bathurst through hilly scenic country, an easy drive.  There are five silos painted in sepia tones all of workers from the old cement works; they were painted by Guido Van Helten.  They are excellent but I’m not sure why some are painted from a rear view. 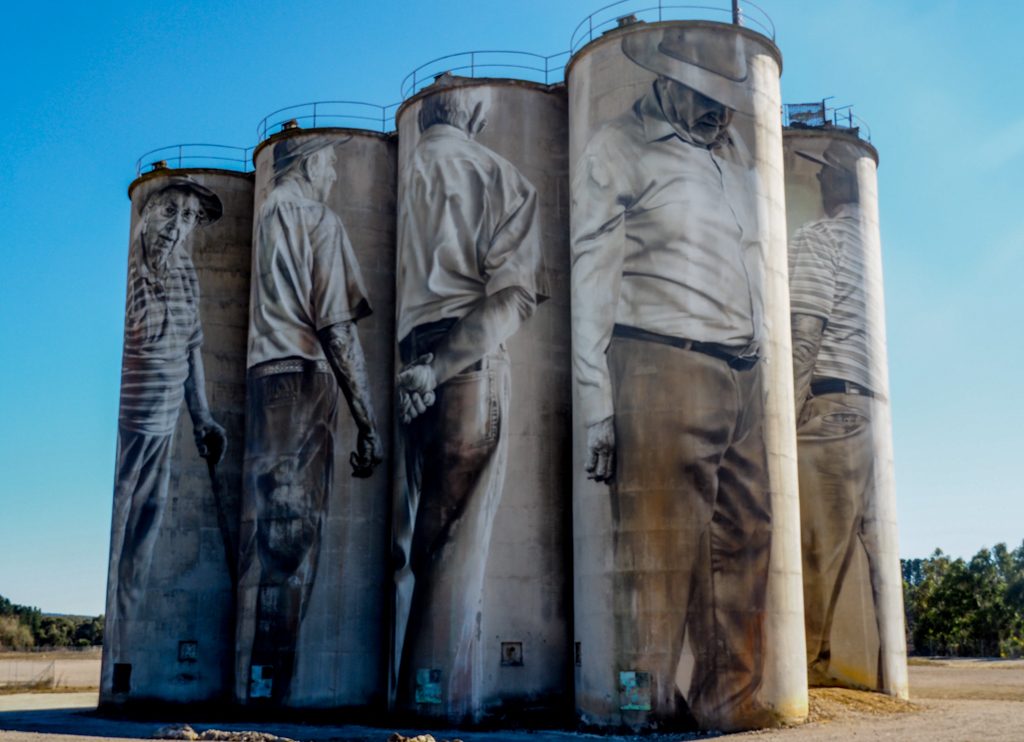 The photo below shows the two end silos and part of the old cement works.  The chimney would have been on the kiln because the process of making cement involves roasting crushed limestone, silica, alumina and iron oxide. 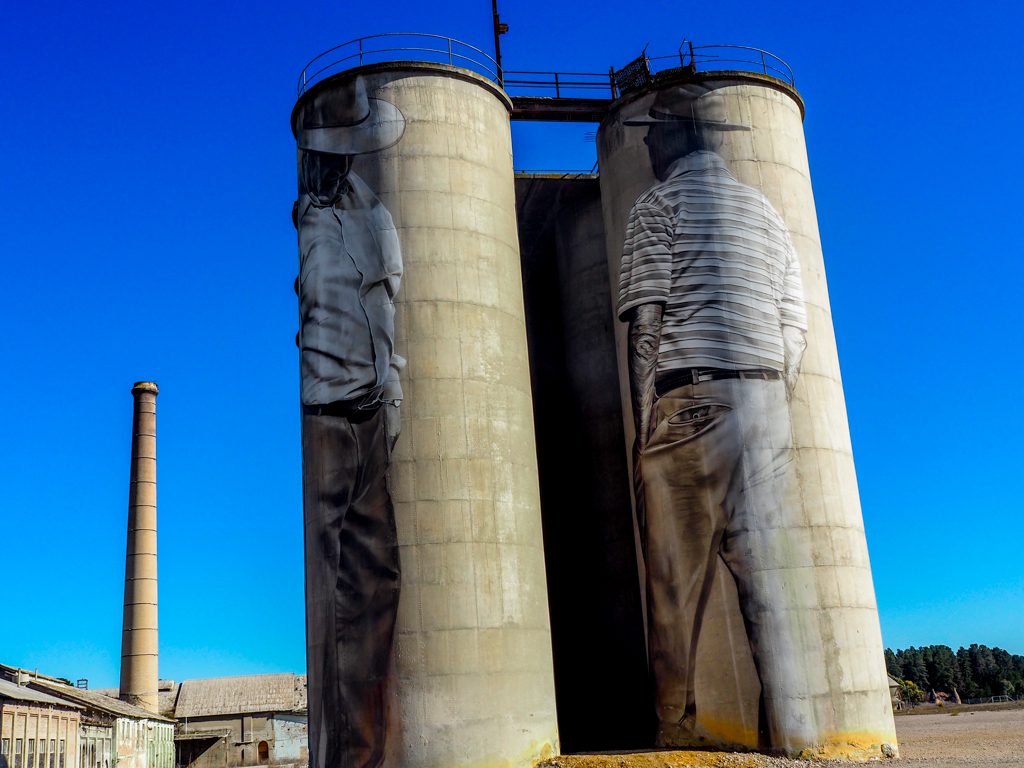 The next photo is of a woman who worked in the office of the cement works: 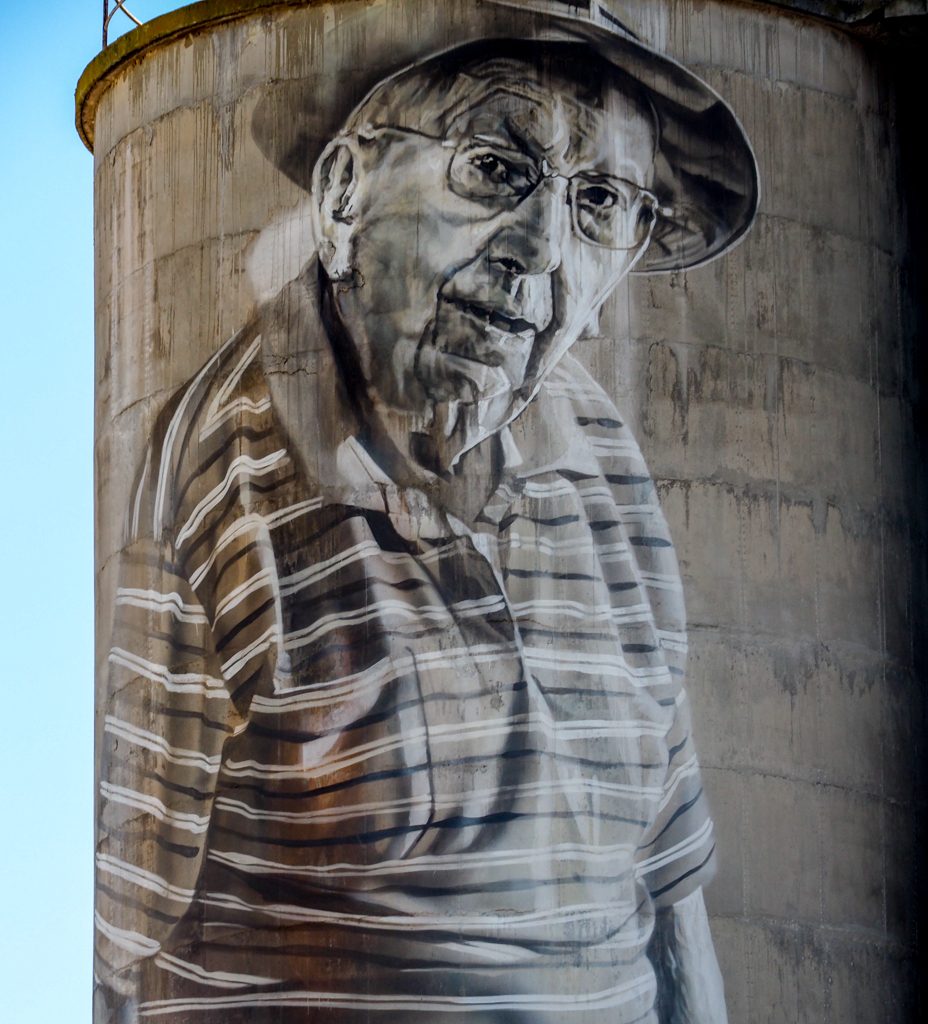 After visiting the silos I travelled to Tarana about 30 Km away and the nearby Evans Crown Nature Reserve which protects 425 hectares of remanent dry eucalypt forest scattered with large granite boulders (Tors).  It was proclaimed in 1975 and named after George Evans who followed Blaxland et al across the blue mountains and went further into the bathurst area.  He did this in 1813.  I started on the climb to the top and got about halfway but after about 150 steps I thought better of it.  It was good to hear a lot of different birds, but there were no wildflowers or orchids. 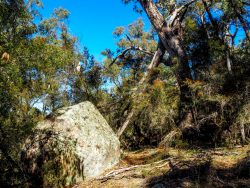 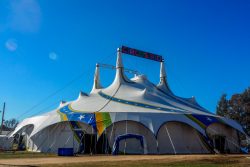 At the showgrounds there was also a circus, Circus Rio, being set up and it had quite a fancy tent shown above.

On Sunday I will travel to generally north to Willow Tree and on the way visit a silo in Merriwa.

6 Comments on Grenfell and Portland