Well you can’t win them all.  I called in at Gympie to see the water tower art there and it was a construction site.  Fenced off with 4 or 5 construction machines, a work shed and lots of other stuff.  I managed to sneak through the gate and get one clear photo.  The artwork is very well done and appears to be of a magic forest. 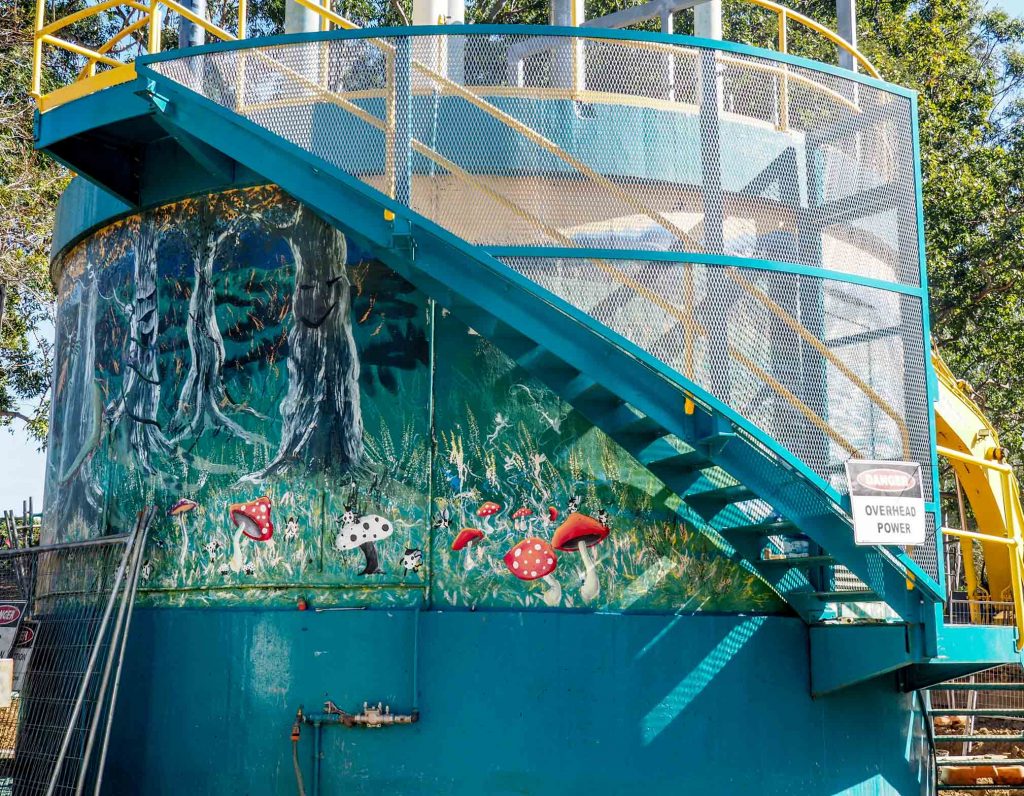 From Gympie I headed for Noosa, it was a good journey winding through green hills and rainforest, so good to be surrounded by green countryside after 3 weeks of brown desolation.  I then set up camp at Habitat Noosa which is about 25 Km north west of Noosa, it is a small enclave surrounded on three sides by National Park and Lake Cootharaba on the fourth.  Very peaceful, big sites, a cafe and micro brewery positioned on the edge of the lake, thanks Trish for the heads up. 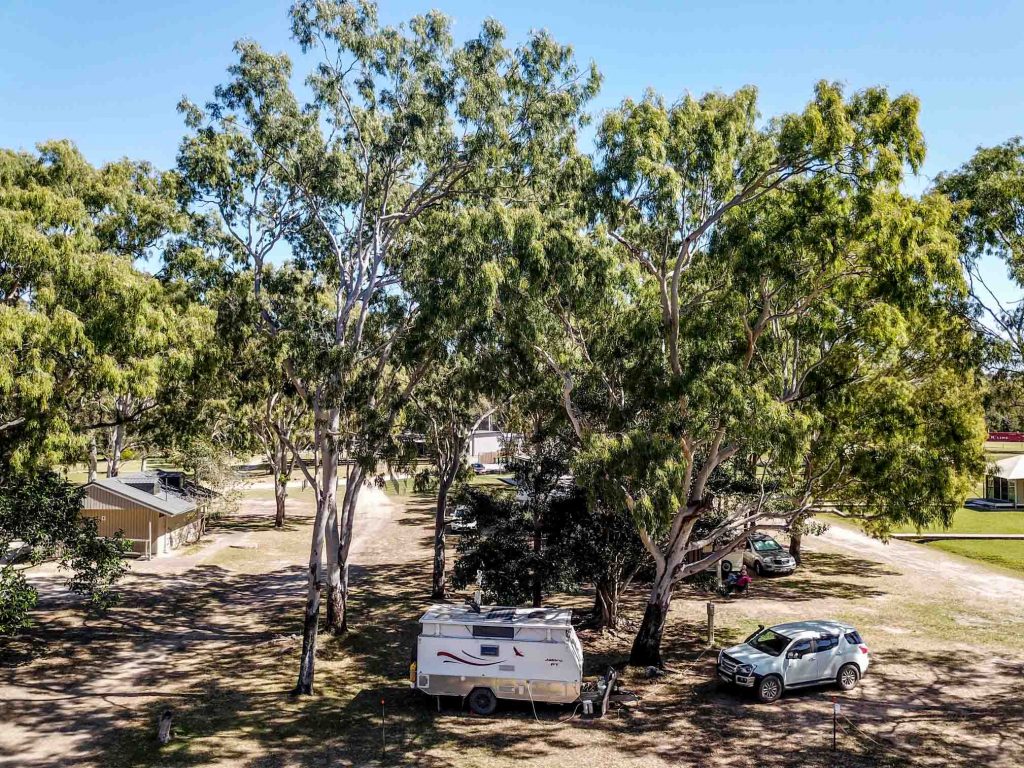 The water tower at Peregian Beach was on my list so I headed off and did some shopping on the way.  Struck out for a second time in a row, very disappointing.  The artwork is basic, there is nowhere to get back to take a decent photo and it is surrounded by a cyclone fence. 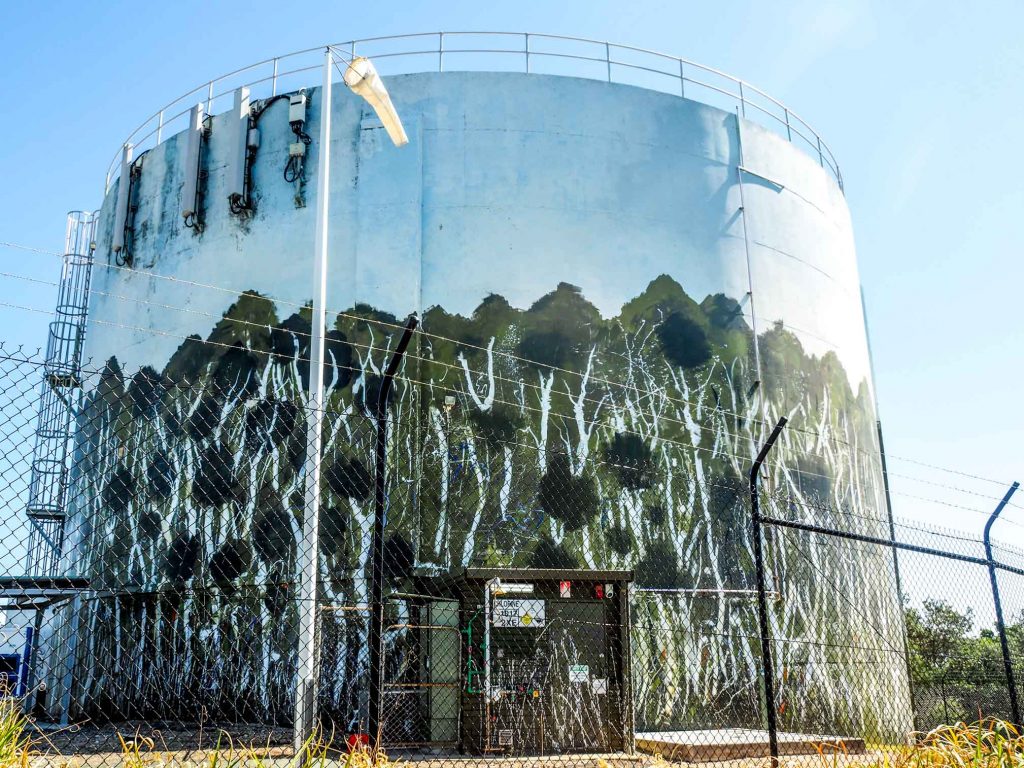 In the afternoon I went on a 2.5 Km walk from the campground to Mill Point, the site of a timber mill set up in 1870, less than 100 years since the first fleet arrived in Botany Bay, shows how quickly the Europeans moved out across the country.  They harvested Kauri, Red Cedar, Beech and Hoop Pine, all wonderful furniture timbers.  The 25 hectare mill site is now all regrowth rainforest, but there is an old boiler standing like a sentry in the bush as guarding remnants an earlier era. 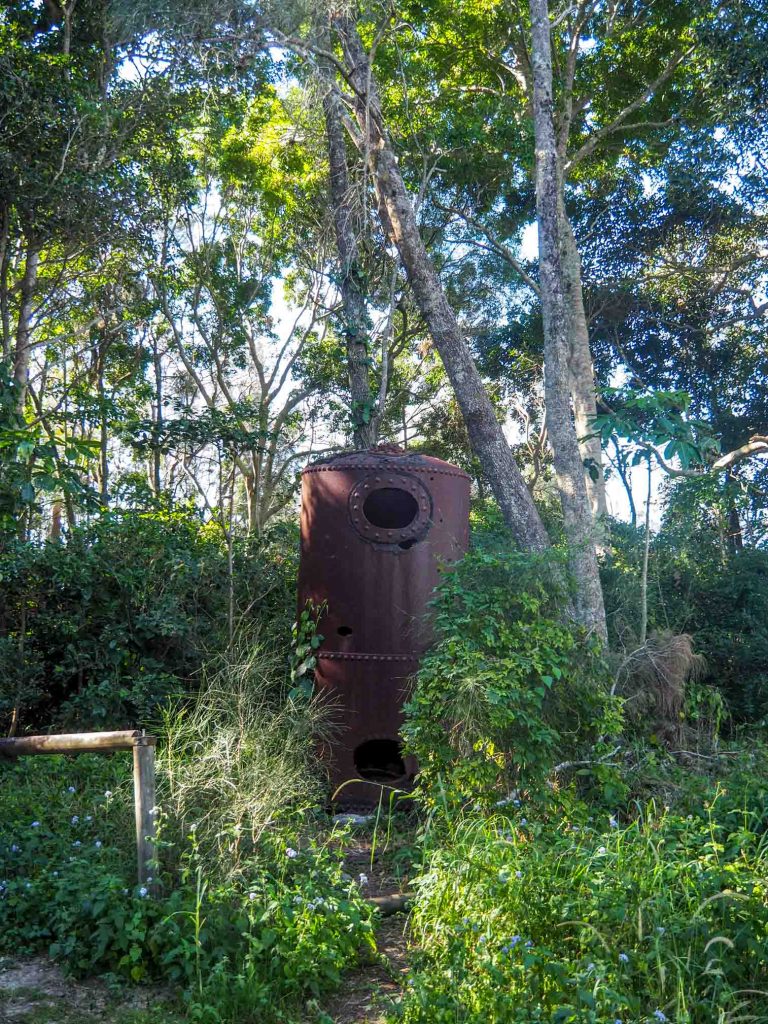 The mill was equipped to saw logs up to 4 ft 6 in in diameter and processed 3-1/2 million superfeet of timber a year, a massive output, equal to 8,250 cubic metres of timber.  Because the mill was surrounded by swamp, a 5 Km tramway was built to bring the timber into the mill with horses pulling the logs.  The last part of the walk is along the low embankment built to carry the tramway through the swamp. 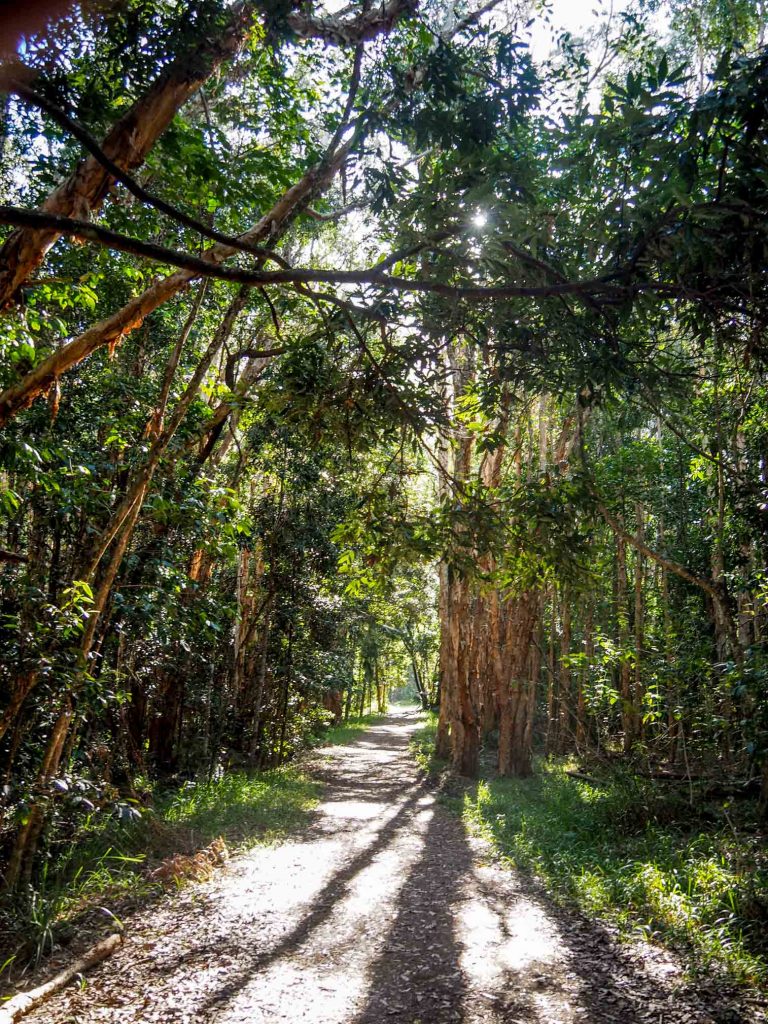 A nearby cemetery held the graves of 5 women, 10 men and 30 children illustrating how tough life here must have been in dirt-floored slab huts, cold in winter hot in summer, and they had to cope with things like these that attacked me on the walk. 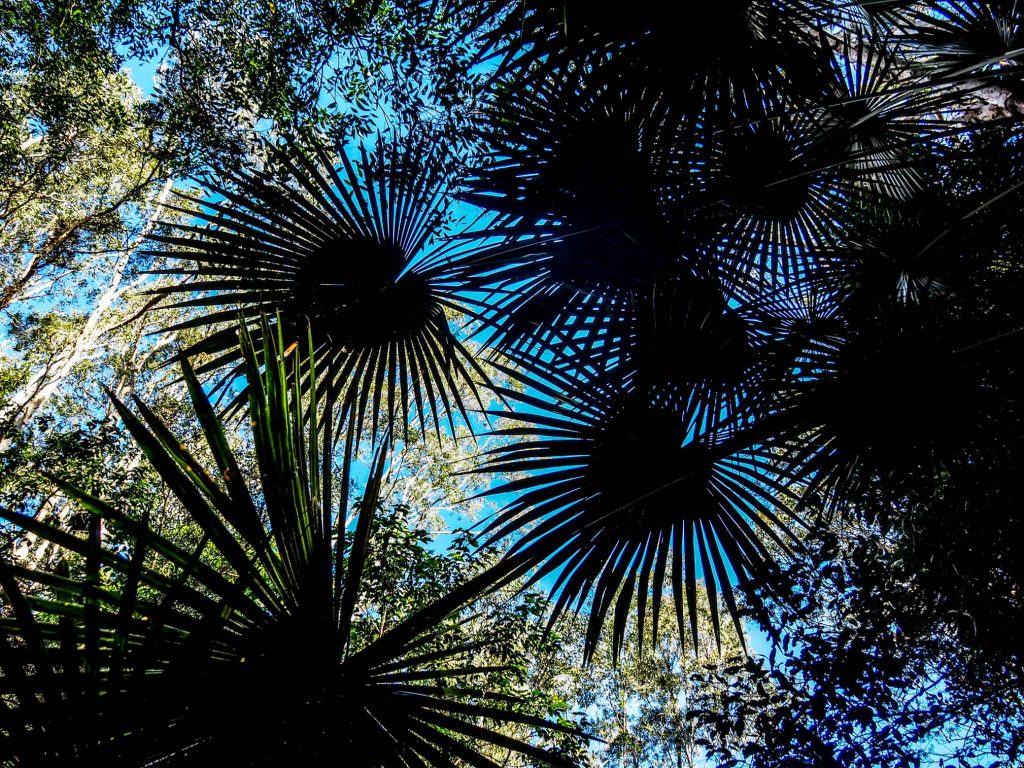 What are These Things

Wednesday saw me heading for Caloundra to see the water tower there, it was great, lots of detail and very well painted.  I approached the tower from the north and this was my first view. 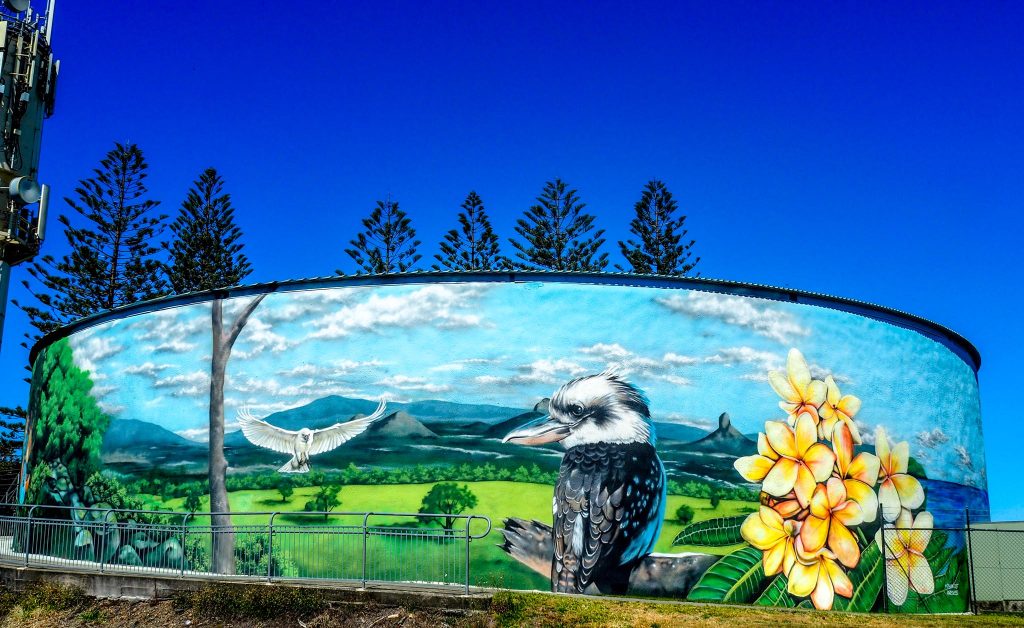 I crossed the road to see the east side, which was just as good. 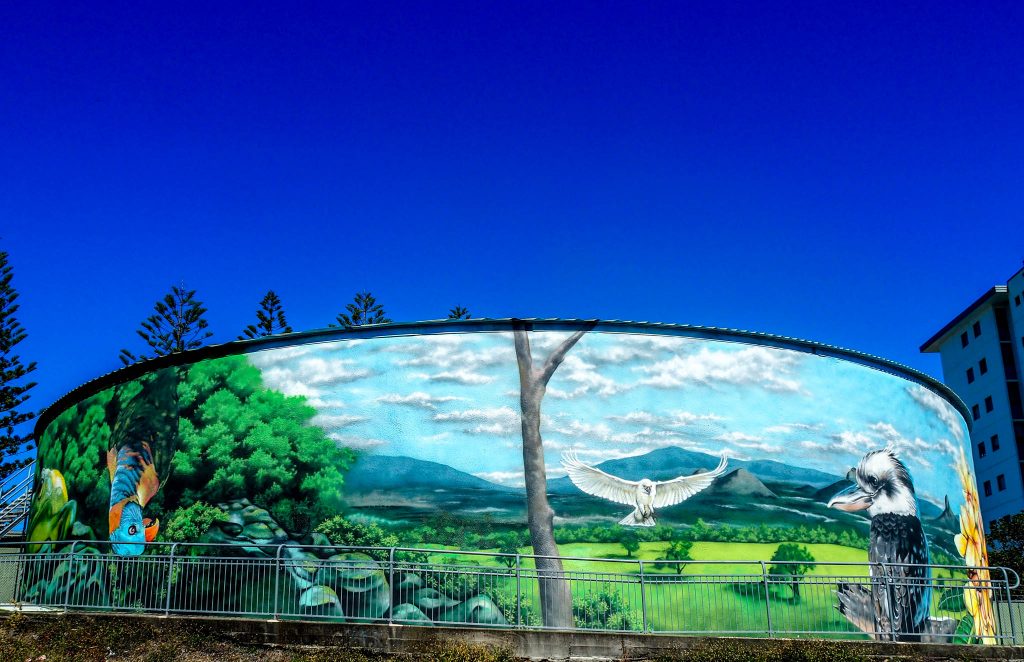 The rear of the tank was not accessible, not sure if it was painted or not.  I thought the Kookaburra was excellent. 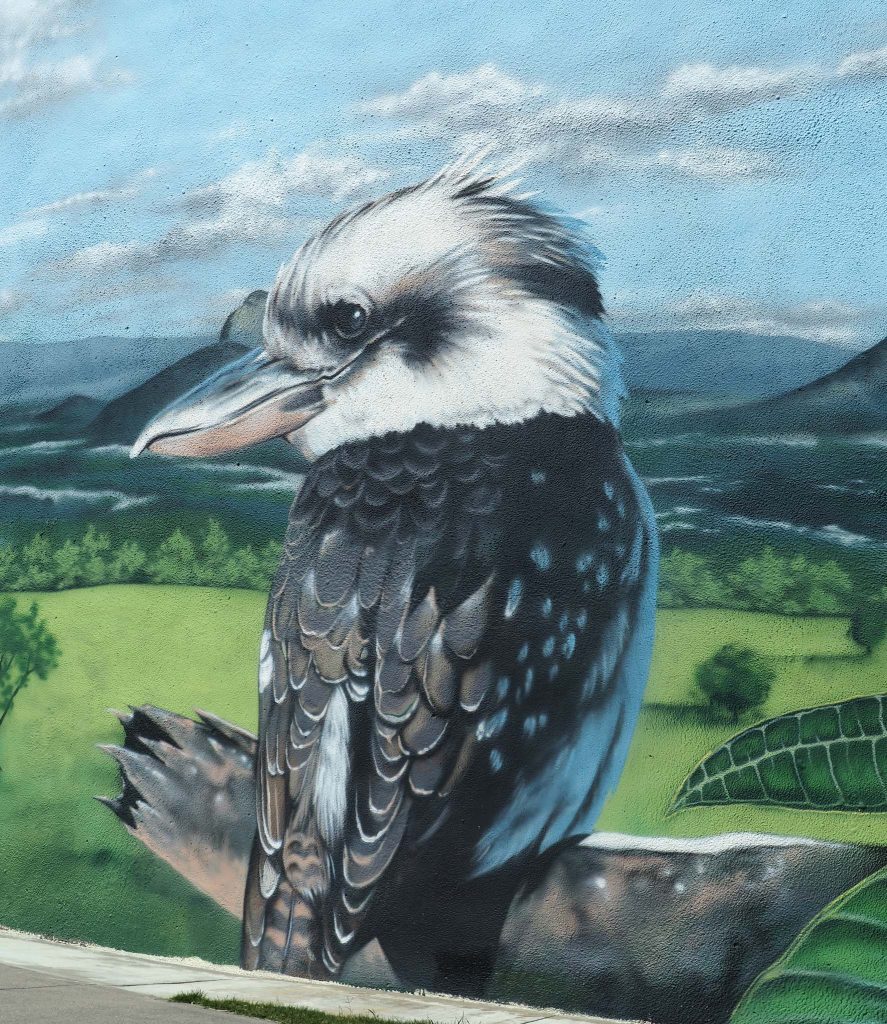 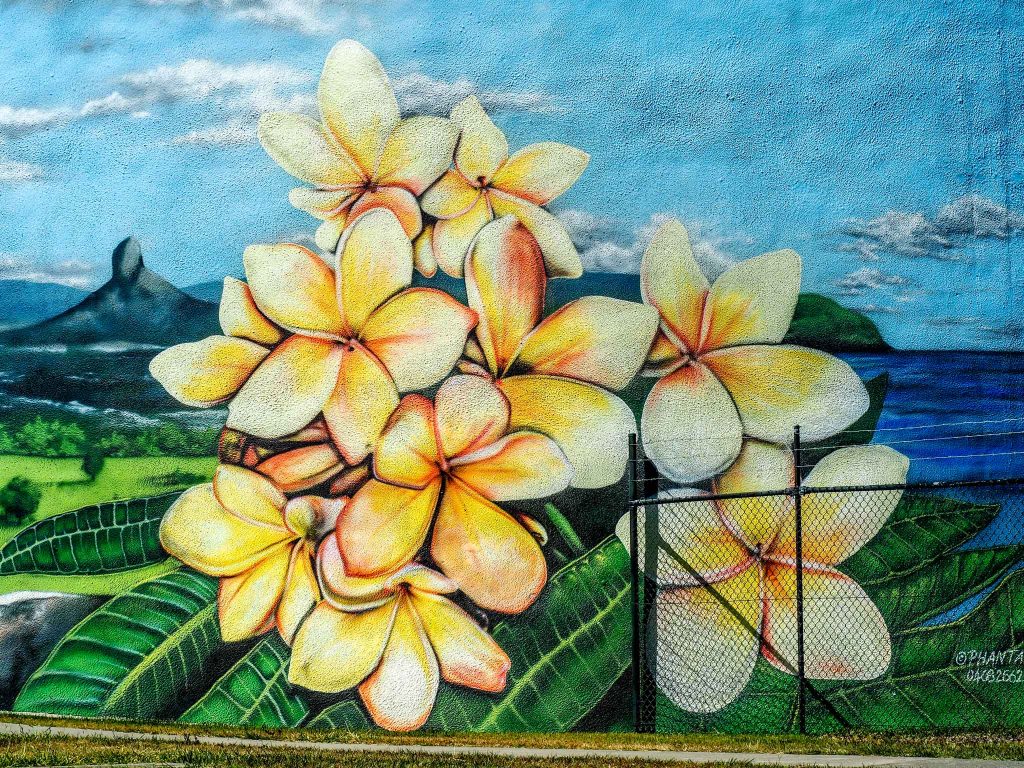 Next to the frangipani flowers behind a fence there was a seascape with a surfer in the centre. 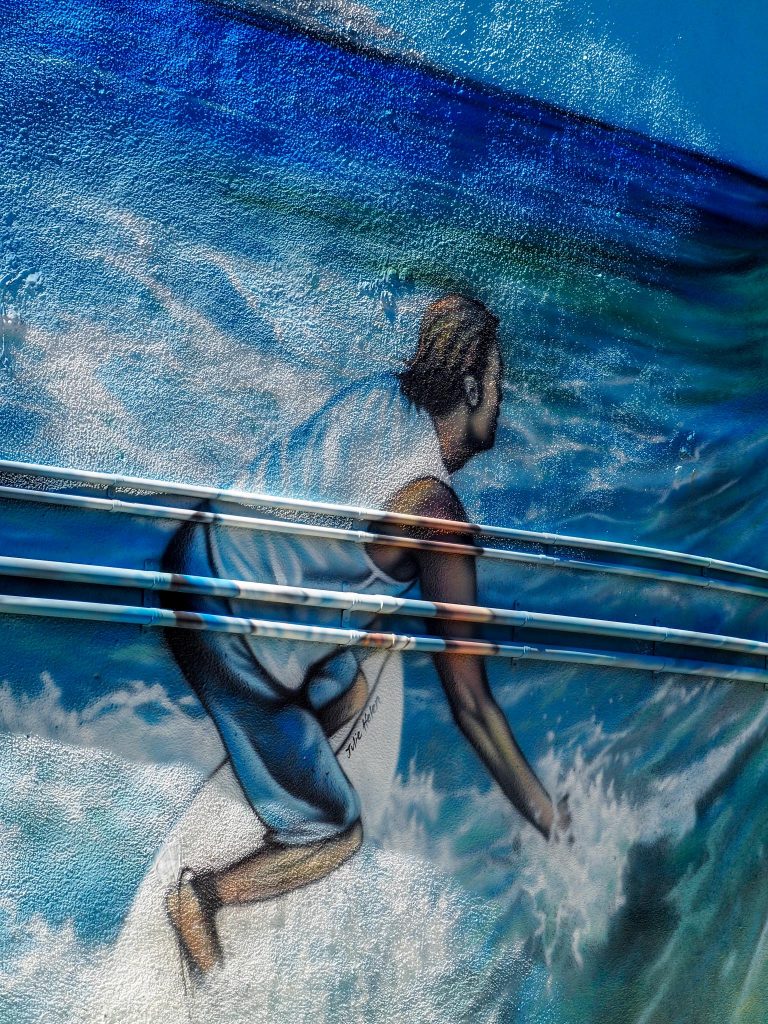 The urbanisation of the Sunshine Coast matches the Gold Coast, it is not longer a quiet holiday destination, the traffic is very heavy and shopping centres abound.

From Caloundra, I headed for Mooloolaba and Point Cartwright where there is another water tower.  There is a small park at the end of the road where the tower and a lighthouse are located, and very little parking, but I was lucky to get a spot as before I was out of the car the other two spots were filled.  The view south was great, the smoke is from a bushfire in Bribie Island where a controlled burn was not! 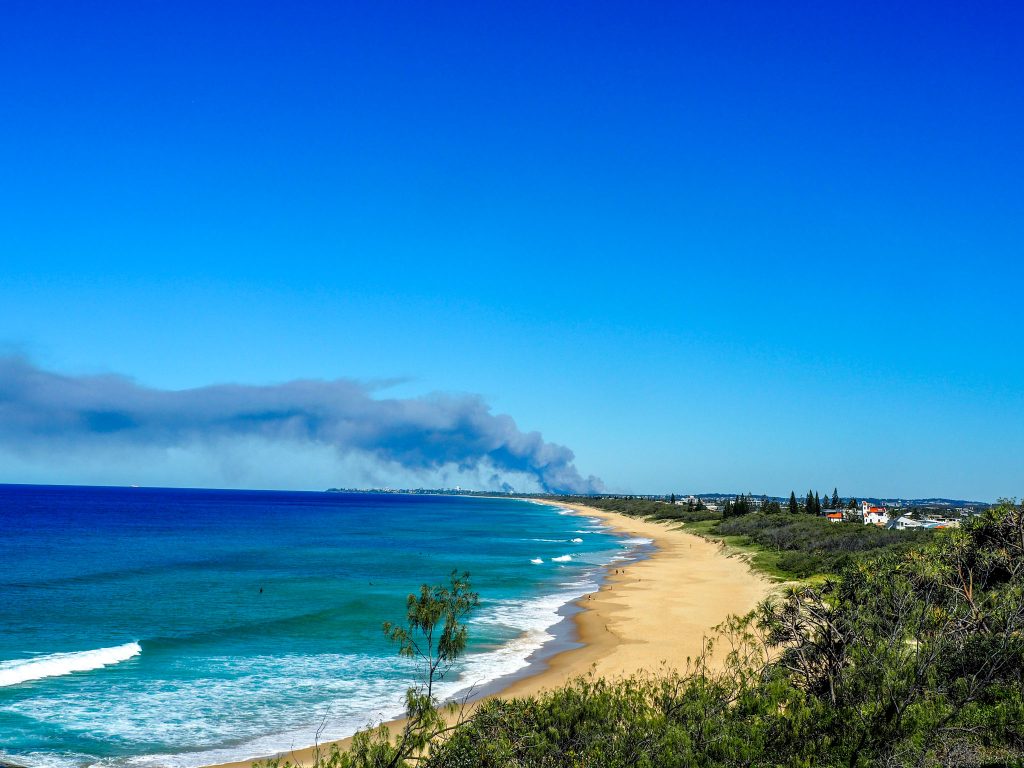 The artwork on the water tower was very good but lots of trees so it was hard to get good shots.  The tower was painted in 2016 by three artists and designed to capture the tranquility of looking out to sea. 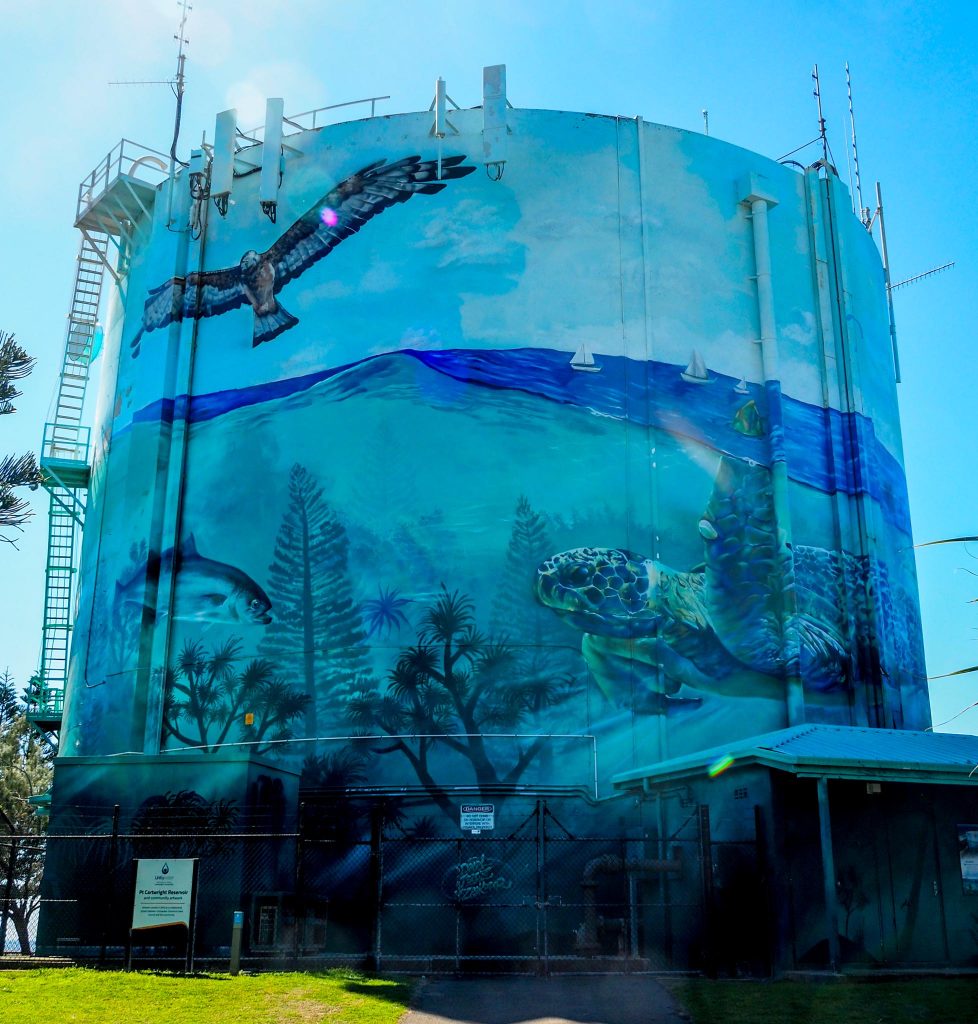 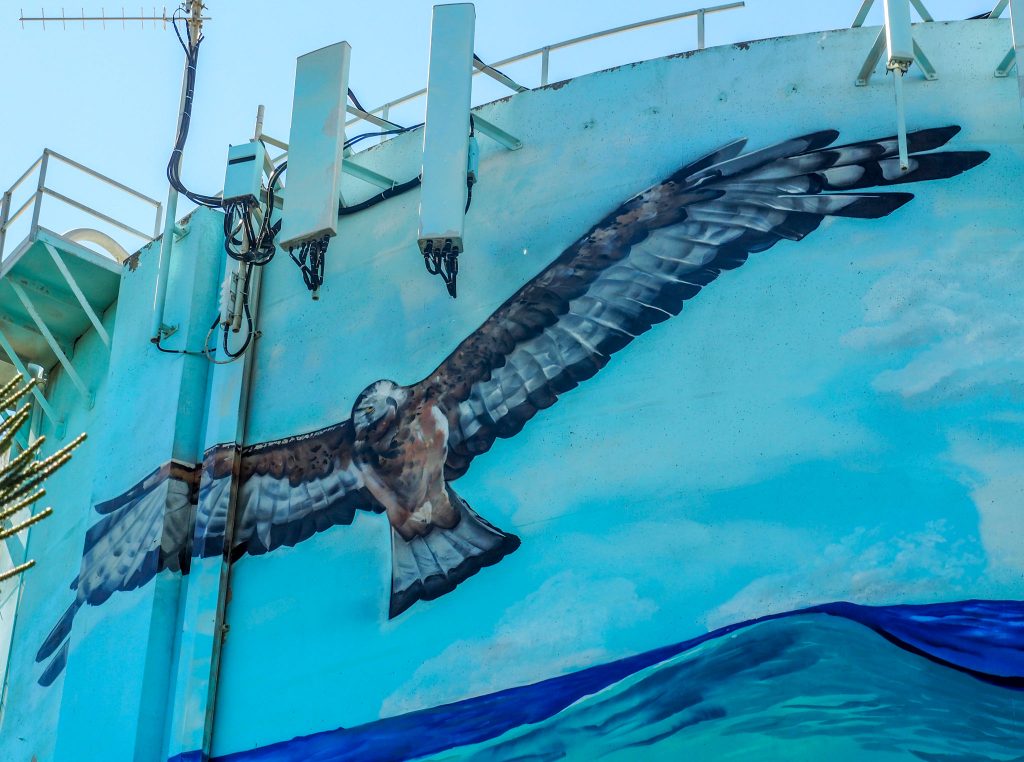 The square Tailed Kite was a frequent visitor to the site while it was being painted, maybe to make sure the artists got it right.  I liked the butterfly on the back of the tower, it was a Richmond Birdwing Butterfly that is a threatened species but the council is doing work at Point Cartwright to assist its survival.  I was lucky there was just enough gap between trees to get a reasonable photo 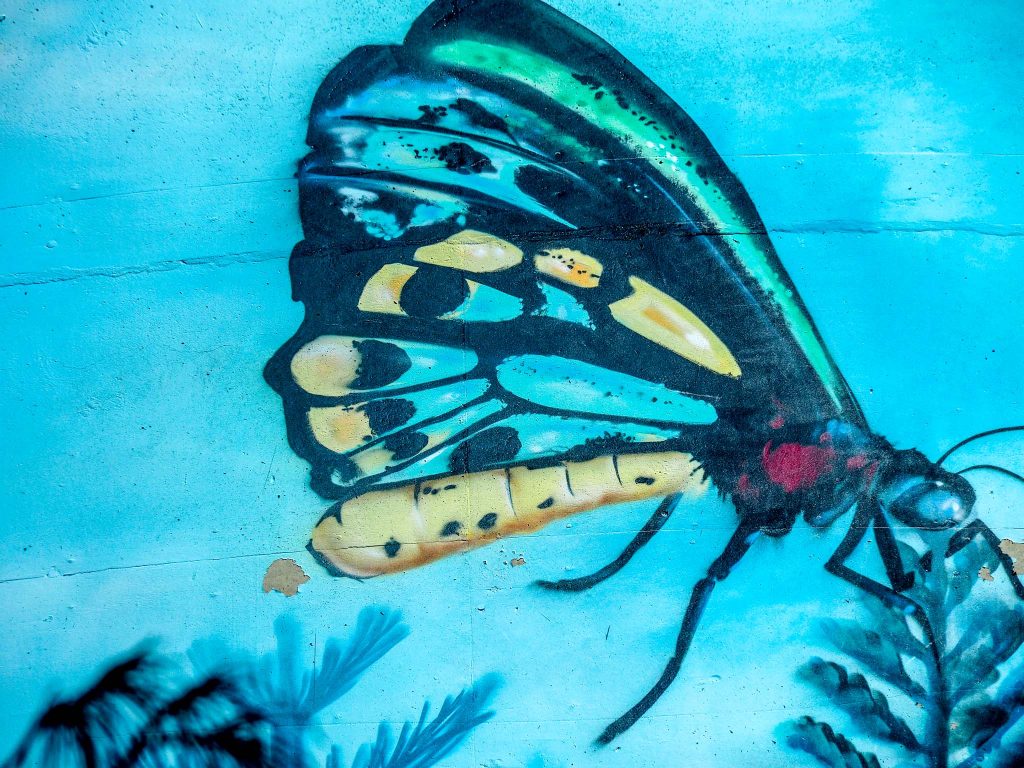 On one side there was a humpback whale but to many trees to get a reasonable photo.   The sea turtle which frequents the area was part of the artwork. 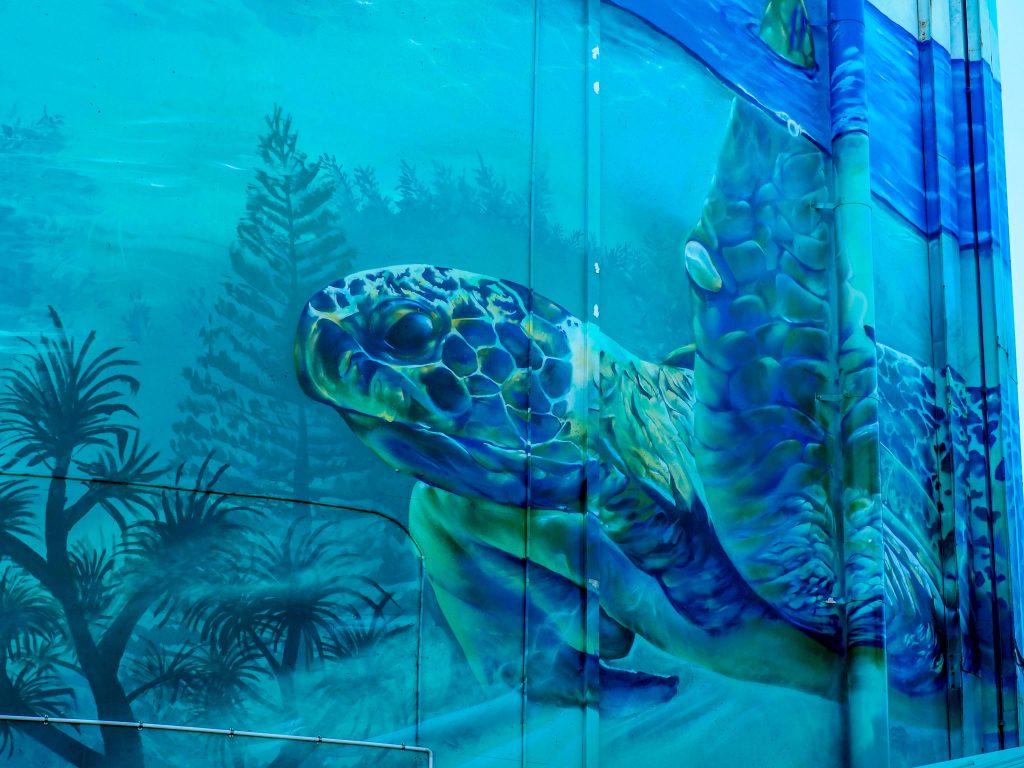 Back at camp a Black Bittern visited me. 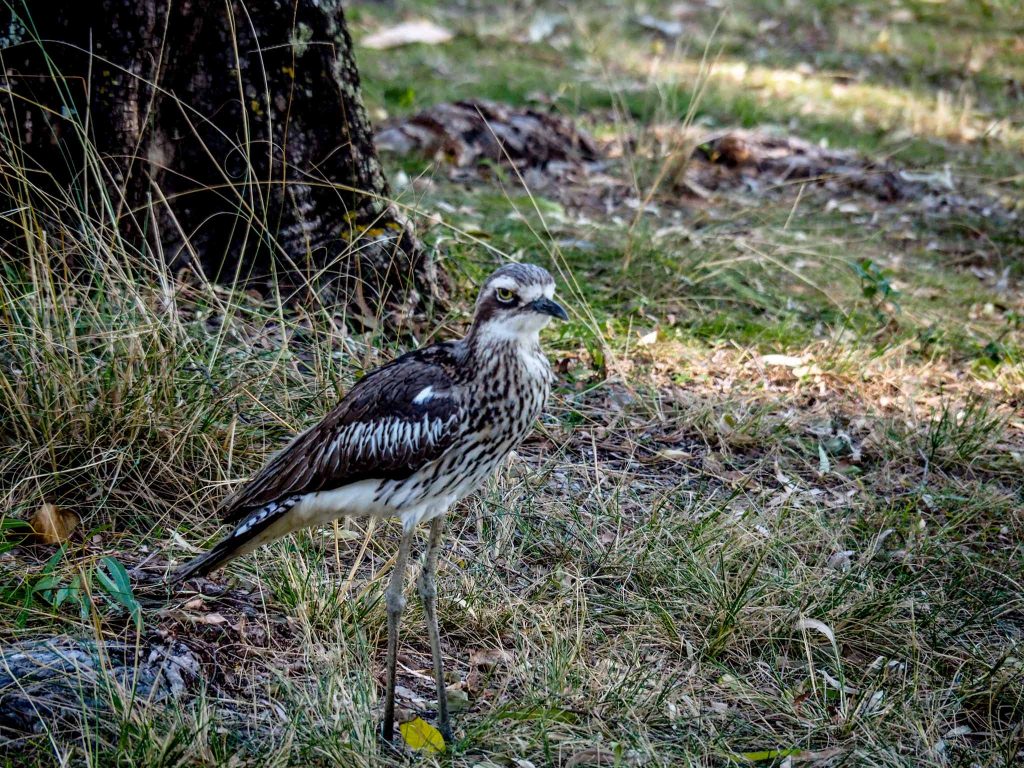 No more water towers until I move on from Habitat Noosa, I might visit a information centre to check out what things I could do.  Nothing tomorrow (Thursday) as my car is being serviced.  Weather is still perfect with mid 20s during the day, nights get a bit chilly at around 10 °C but the heater covers that.