On Saturday I set off for Biggenden and visited the water tanks at Monto on the way.  There are two tanks painted with artwork, one looks quite old and is a depiction of Three Moon Creek Farm.  The story is that the farmer went to the creek to get a billy of water when the full moon was up and he saw the moon, its reflection in the creek, and a reflection in the billy, hence Three Moon Creek. 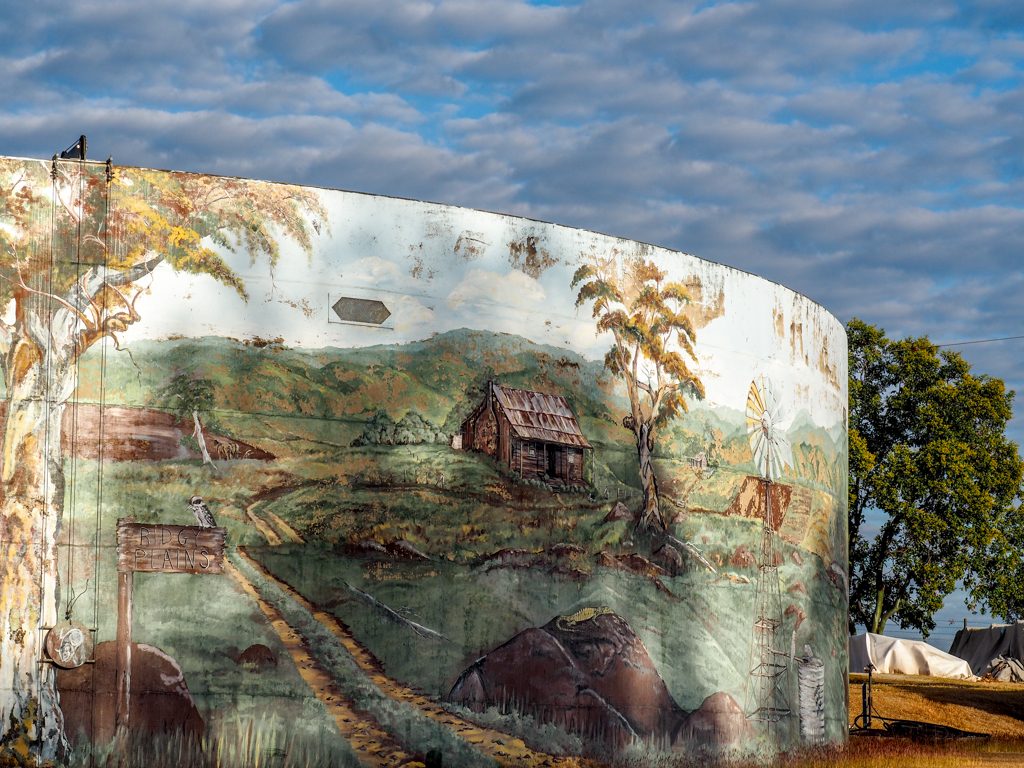 The second newer tank is close to a pump shed and the artist has painted a man with his dog on the shed and their shadows are projected onto the water tank for a very good effect.

This is the Monto pump shed. 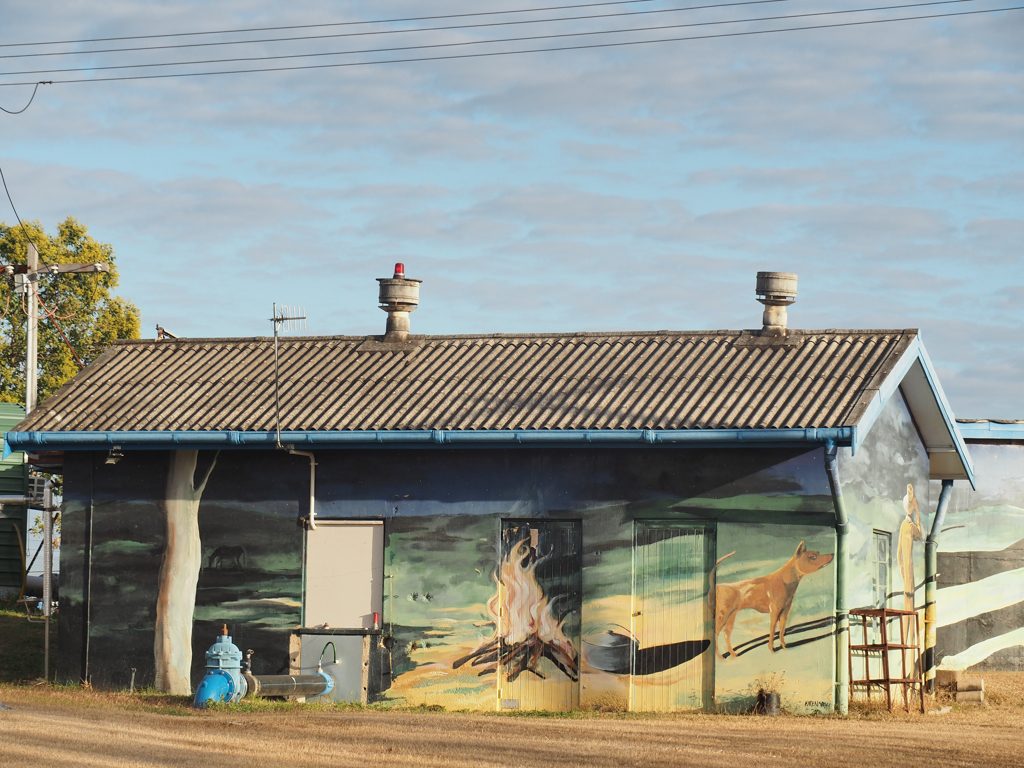 The Monto tanks are surrounded by a cyclone wire fence making taking clear photos difficult, for one photo I reached up over the top of the fence and for another I squeezed the camera through a gap in a gate.

From Monto I drove to Mundubbera where there is a small tower servicing a pump shed.  The artwork was very good representing the geography, the flora and fauna of the area.  In this view you can see a mountain range in the distance known as the Seven Sisters and the Burnett river . 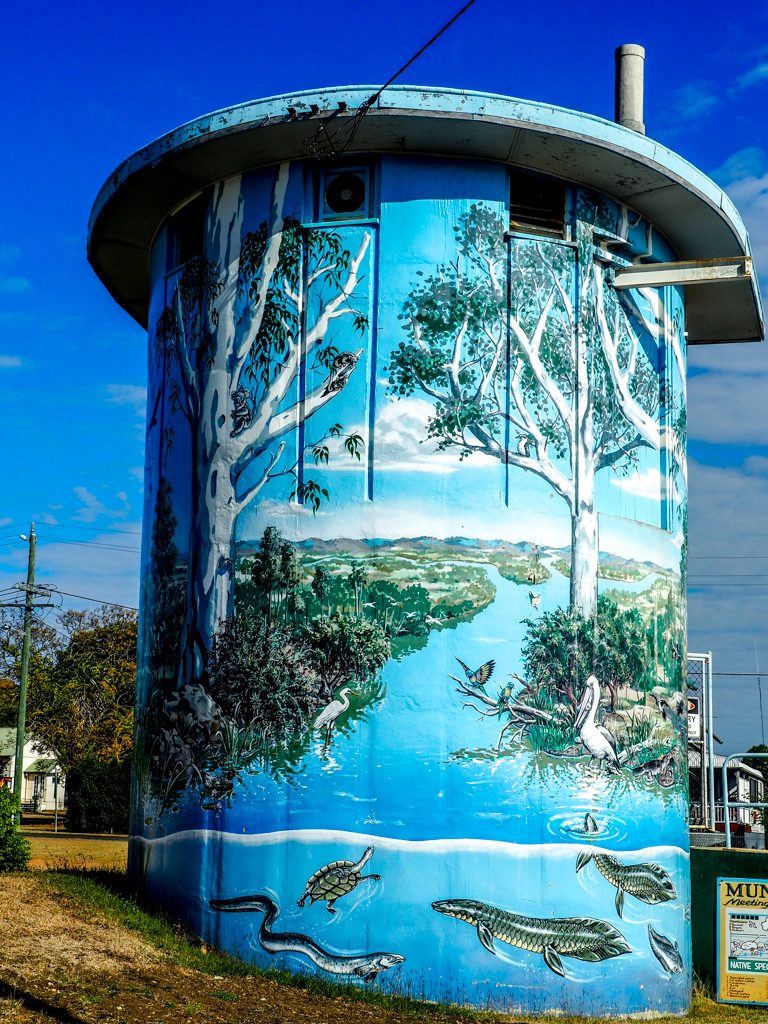 In this shot you can see the staircase that winds up the tower. 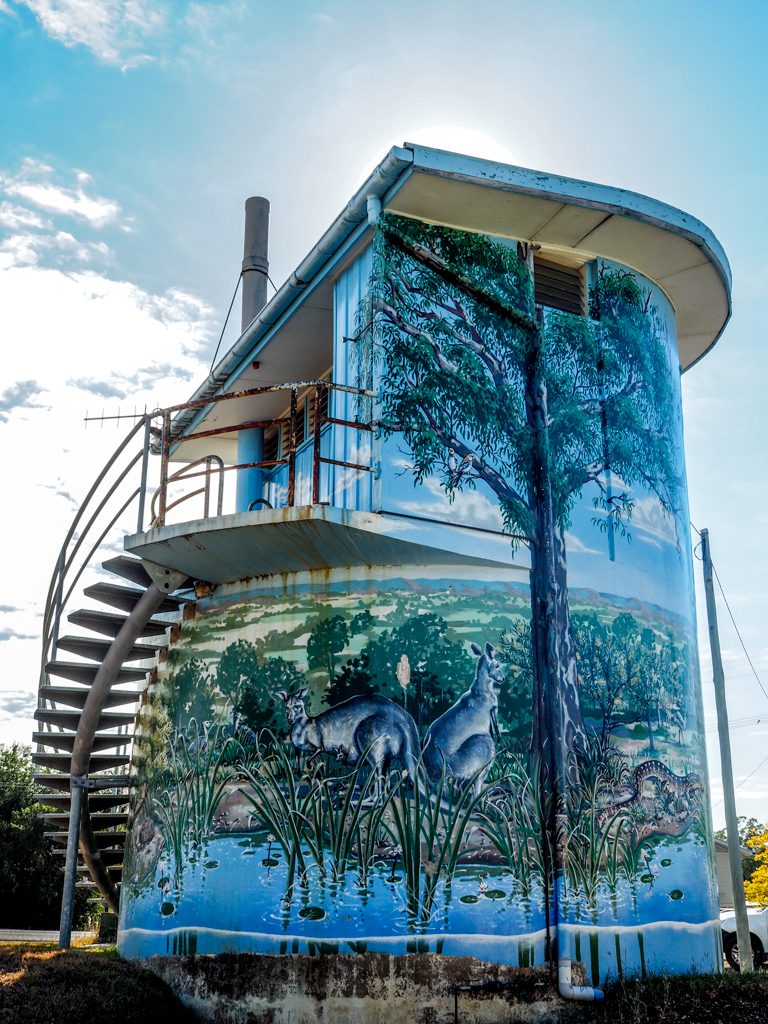 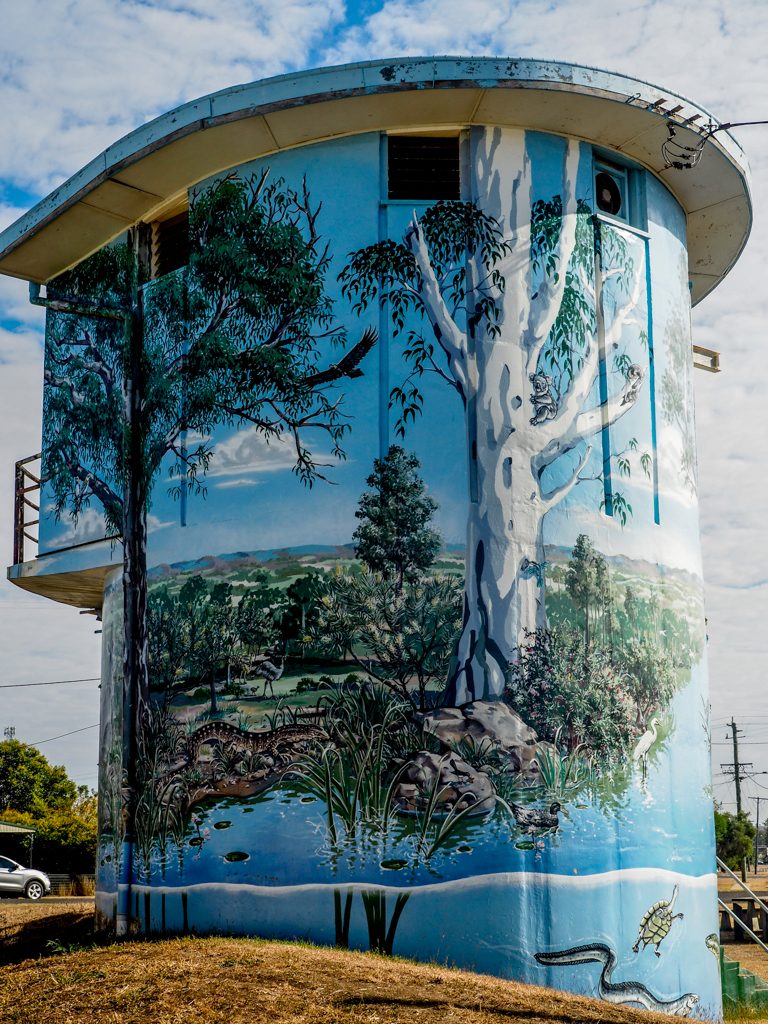 On Sunday I visited two National Parks close to Biggenden, Mt Woowoonga and Mt Walsh.  Both mountains are the result of vocalic activity 220 million years ago.  A massive eruption created a giant caldera, like a meteor crater.  Then pulses of magma pushed up but did not break the surface and then solidified into granite.  Erosion over the millions of years ground away the soft rock leaving the mountains.  Mt Woowoonga is covered in vegetation while the top of Mt Walsh is exposed granite with vegetation on the lower slopes.

I had made a wrap before I left camp and had that at the picnic ground at the base of Mt Walsh.  It was very peaceful and relaxing.  I got a bit of a boost from a young woman setting off to climb the mountain (2-1/2 hour climb and descent).  I asked her if she was going to climb it and she responded “Yes, I did it when I was 15, are you going to do it?” I replied “Do I look like I could” and she said “Yes you do”, made my day!

At Mt Woowoonga there are lots of Hoop Pine trees that tower over the rainforest.  It’s hard to estimate the height but my guess would be 100-125 feet, they grow to a maximum of around 200 feet and live for up to 450 years.  Hoop Pine gets its common name from the outer layer of bark which forms scale-like horizontal hoops.  I took a vertical panorama to try and capture their height.  To give you an idea of the height, it took four frames to capture this panorama

Although these National Parks are small, around 2,500 hectares, about 450,000 hectares of former state forest in Queensland and around these parks is managed by the National Parks Service as conservation areas, implemented in 1999.

The rainforest at Mt Woowoonga was very dry just like most of this area of Queensland.  On my travels I pass areas of irrigation and it seems that Queensland has sufficient irrigation water, unlike NSW.

I enjoyed the walk at Mt Woowoonga and in places you catch glimpses of the hoop pine towering above the forest, this would have made it easy for the timber getters to find them to cut down. 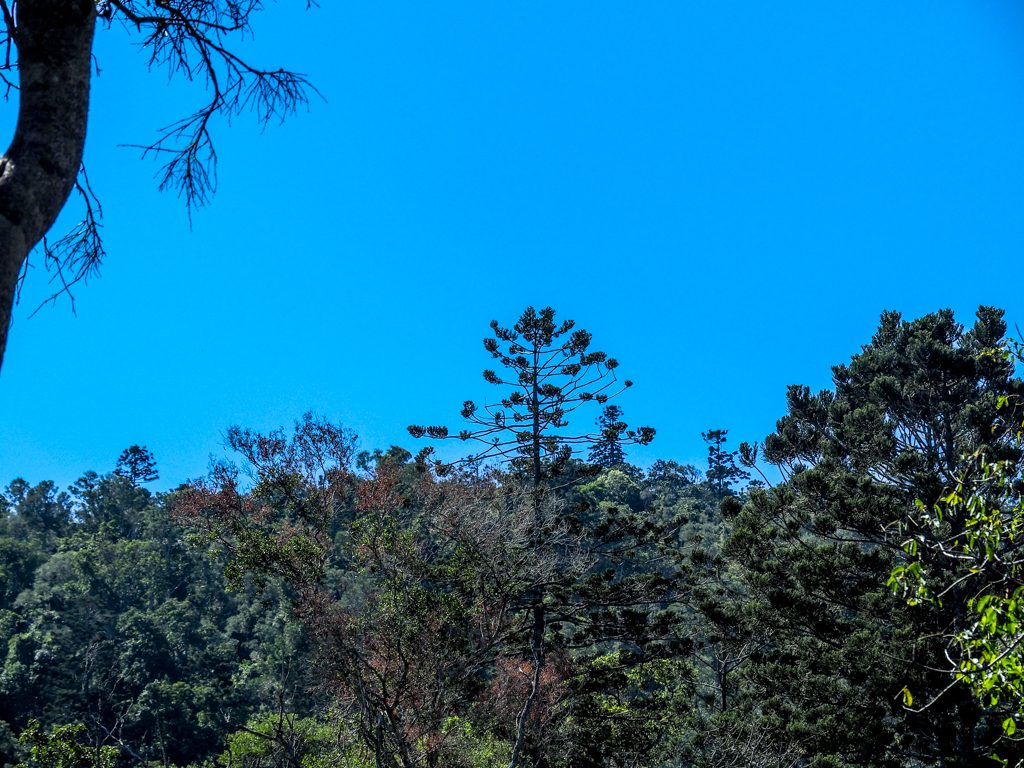 Hoop Pine above the Rainforest

These hoop pine are relatively young so as the age they will emerge to a much greater height.

Tomorrow I am off to Noosa Habitat a small camping area next to the Great Sandy National Park – Cooloola Recreation Area and I will be there for 8 days, i’m looking forward to that stop.