Arrived at Port Melbourne to see choppy seas (oh oh).  Boarded the ‘New Spirit of Tasmania’, found our cabin on the 7th floor, went to the lounge and restaurant and bought quite a nice meal of fish and salad, with a couple of glasses of chardonnay, while heading out through the bay.  The Captain introduced himself and told us that there would be a 2 – 4 metre swell and 3 metre waves as well, and that we’d reach the Heads at 10:30pm.  Headed off to bed at about 9:30 and everything was fairly calm, then, right on 10:30, the ship started heaving, thumping, creaking, with waves splashing up to our porthole!  I quite liked the feeling, but there wasn’t any way we could have got out of bed, so we had to just go with the flow, so to speak.  We ended up only getting two hours sleep, and fortunately NO sea sickness.

Arrived at 6am, and as our quarantine checks were all done in Melbourne, we were on the road by 7am.  We headed for Deloraine, which is a very pretty little village, went to a bakery and bought some delicious filled pides for lunch, bought our supply of fruit and veggies (which we weren’t allowed to bring from Melbourne).  At the supermarket, we asked the locals where they recommended we travel to and they suggested going through the Central Highlands, where it had been snowing recently.  So, we took this scenic route to Hobart and it was beautiful.  Snow Gums, Australian Pencil Pines, stunted with the cold and looking like one hundred year old bonsais, all surrounded by the Great Lake region of Tasmania.

We drove into an area called the Steppes Sculptures, where a sculptor had donated a number of bronze sculptures, mounted on large pieces of stone – all right in the middle of the bush! 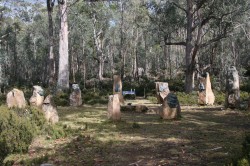 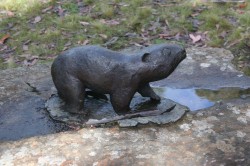 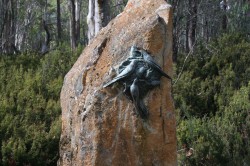 Arrived at Berriedale in Hobart to find the caravan park closed, so continued east to Cambridge in hope, because the 4 other parks we rang were full.  We got the last site, after the receptionist had shuffled bookings around, which they don’t like doing, whew!  After a long day we didn’t want to have to drive on, we booked in for a week.  It seems that this is a very busy time for tourism, so we are booking ahead from now on.

Yesterday we visited the historic town of Richmond.  Tourists everywhere, buses, guides, large groups of people all wanting to see the old Gaol, the historic bridge and the wonderful buildings.  We went to see the goal, which is the only historic Gaol in Tasmania, that is not a ruin.  Built in 1826, when the Governor was Captain Arthur Phillip, the solitary confinement cells were 2.1 metres by 1 metre, no windows, and the prisoners were given only a bucket, a blanket and a meal of bread and water a day.  There was a flogging yard where convicts were punished with the Cat-o-Nine-Tails at 9am every morning.

The nearly 200 year old almond tree in the photo is said to have been planted by a young Aboriginal boy, who was in the gaol for treatment for an injury. 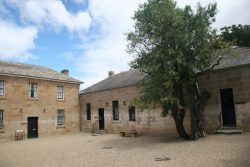 We then had a picnic in the park surrounding the gaol