We had to spend two days confined to the van because of the shocking weather.  We were lucky not to experience the strong winds that the coast, further north suffered, but the rain was amazing.  100mms at least.  No camp kitchen facilities here. 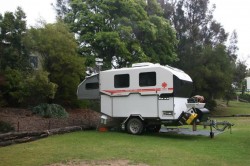 We spent several days there, drying everything out and enjoying the lovely surroundings.  We especially loved Bermagui; a small village on the Bermagui River, with a magnificent State Forest. 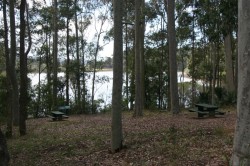 We picnicked there twice amongst massive eucalypts and cycads.  I’ve had a cycad for ten years and it’s about 15 inches tall!!  We were able to light a fire, so had our BBQ fix.  Unfortunately, I found a tick in my head, which has left a lump about the size of a marble, and it was extremely painful for about 40 minutes after I removed it.  All the locals say to expect getting a tick and there are special tick removing things for sale. 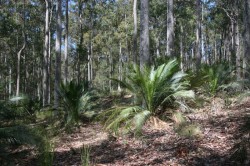 Time to move on so we set up at Gillards Beach, in Mimosa Rocks National Park – stunning!  Our camp site had a great view of the ocean, although the winds were freezing at times, but the highlight of the stay there was watching the constant stream of whales and calves, heading south.  We had no idea that this could have been a possibility, and heard on the radio that the exodus of the mothers and babies was earlier – so how lucky were we?  The calves were incredibly playful and captured our attention all day long.  There was one occasion when the female rolled over on her back and waved her flippers in the air – so exciting, but we weren’t quick enough to get a photo. 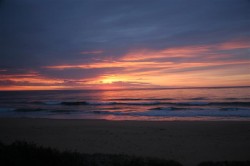 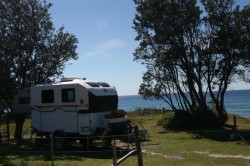 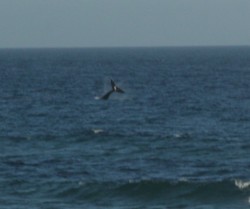 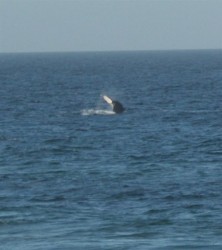 Met some nice people there – one group from the Kimberley Karavan Owners Group – a group set up to “Help Members Live the Dream”!  Very interesting to see all the additions and modifications people have made to there vans.  Had drinks with Sandie and Phil, on ‘their front porch’, (an area of grass, facing the ocean), where we continued to chat and watch the whales.

Today we are 5kms out of Tathra at  Countryside Caravan Park (dogs allowed).  Not near the ocean, or the highway (good), but full of large trees, full of lorikeets, parrots, a great kitchen area, under cover.  We have stocked up with water, done the washing, cleaned the van (after a bush rat got in last night, gnawed through our bread container, for the second night in a row!!!)

Have decided to extend here for a few days, then the weekenders should have vacated Bournda National Park and we should be able to find a good site.