A lot has happened since our last blog.

Again, we found another brilliant picnic area at Kianniny Bay.   Watched boats coming in from rough seas, enjoyed two families watching their children playing in the creek, then we were engrossed in their cricket game, without making them feel too conspicuous!  Te scenery along the East coast is spectacular. 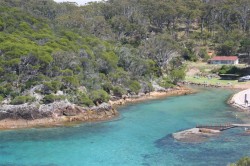 Drove into Bournda, after checking it out a few days earlier.  Thought we’d have to battle for a site, but only one or two camps there.  Set ourselves up, with solar panel, etc., and over the next three days, enjoying our self sufficiency, making bread and cooking lamb shanks in the camp oven – feeling that we were impervious to anything . . . then at 3am, something tried to open our caravan door.  Many leaps and bounds getting ourselves out of bed to look outside, only to not see anyone or anything.  Once we thought no-one was around, I decided to go to the loo.  Once seated – something, or someone, trying to get in the van again (which we had locked by then).  Then I shone a light, and saw a massive possum.  They are getting a bit too familiar!!

We lunched at the beautiful Bournda lagoon.  The wind was freezing, but we found a sheltered table and went for a walk afterwards. 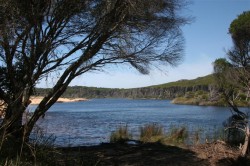 Next day, we went to moved onto Two Fold Bay Caravan Park – a quiet park, well run and where you can have a look for whales. Don’t say it – we are getting soft!!

Some bad news was received over the last few days;  unfortunately, we have heard that our lovely neighbour and friend, John Pothecary has died of a massive stroke.  We will miss him very much and we wish we were able to attend his memorable, but we will commiserate with Janice later next week and we look forward to many years ahead, sharing all our memories.

We travelled the Snowy Mountains Highway, a trip that I wasn’t looking forward to, but how wrong could I have been?  It was spectacular!!  We even saw snow on Mt Kosciuszko!  The lakes are beautiful, as we descended from 1500 metres to 1100 metres, all cradled by massive mountains.  At 1100 mts, at Nimitabell, it was 8 degrees and at 1500 mts (the highest of our climb), it was 14 degrees.

We stayed at Talbingo.

We are now at Rutherglen for 4 days.  We were lucky enough to get a lake side site, even though it is quite small. 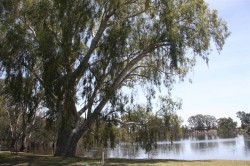 We are surrounded by a very large group from Phillip Island, who have left the island, because of the Moto Grand Prix – for two weeks!!  They are a great lot, but I think there are more dogs than owners!!  A bit confronting for me.  A must add, that all the dogs are very well behaved and so am I!

(Had a technical problem with this blog, so unfortunately, not as many photos as usual).