After eight very restful days at Noosa I moved onto Ocean View Caravan Park, a big trip of around 80 Km, and the park really does have a wonderful ocean view over the Sunshine Coast.  The photo below is what I see from my van.

Once set up, I went to Maleny to Mary Cairncross Scenic Reserve which protects about 50 hectares of remanent rainforest.  A 2 Km walk takes you through beautiful rainforest with massive trees, plams, ferns and lots of birds.  The walk is cool and flat and very enjoyable. 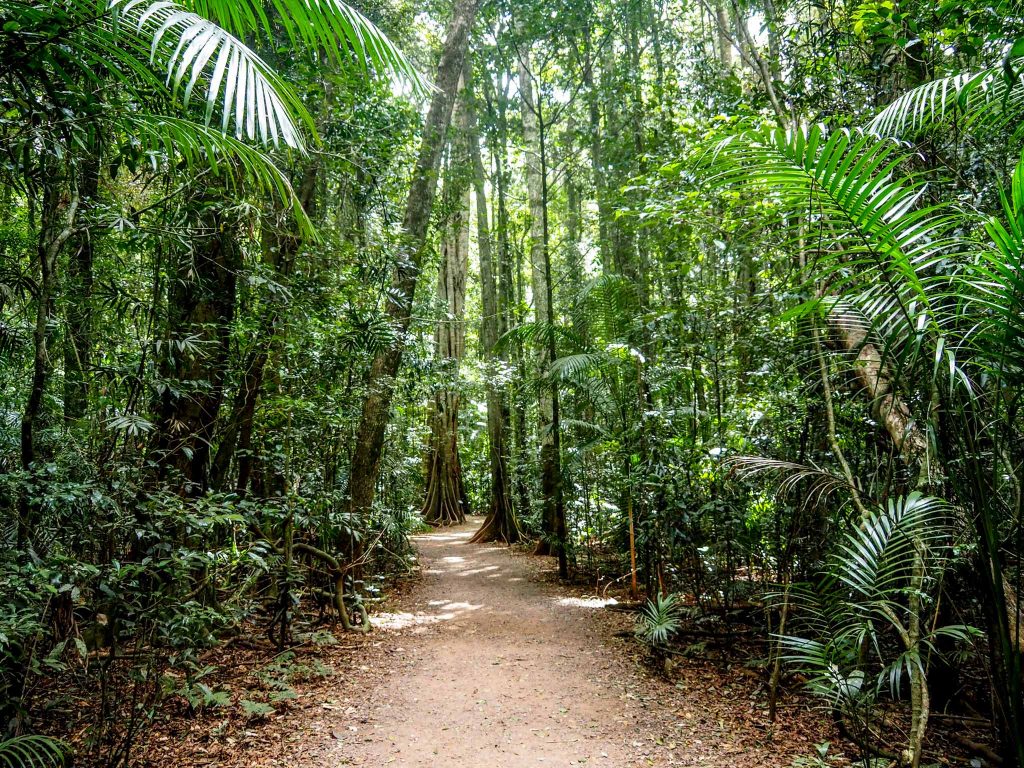 The tree that looks like it is in the centre of the path is a Watkins Fig, a variety of Strangler Fig, so called because it kills its host tree.  A seed dropped in the upper branches of the host tree sprouts, it then sends down thin roots that thicken over time to eventually cover the whole outside of the host tree, killing it.  But it’s not all bad, as the hollow left inside the fig, when the host tree rots away, becomes an important habitat for birds and animals.  High in the big trees grow massive birds nest ferns, probably 20 metre up the tree and higher,  just as well my camera has 10X zoom. 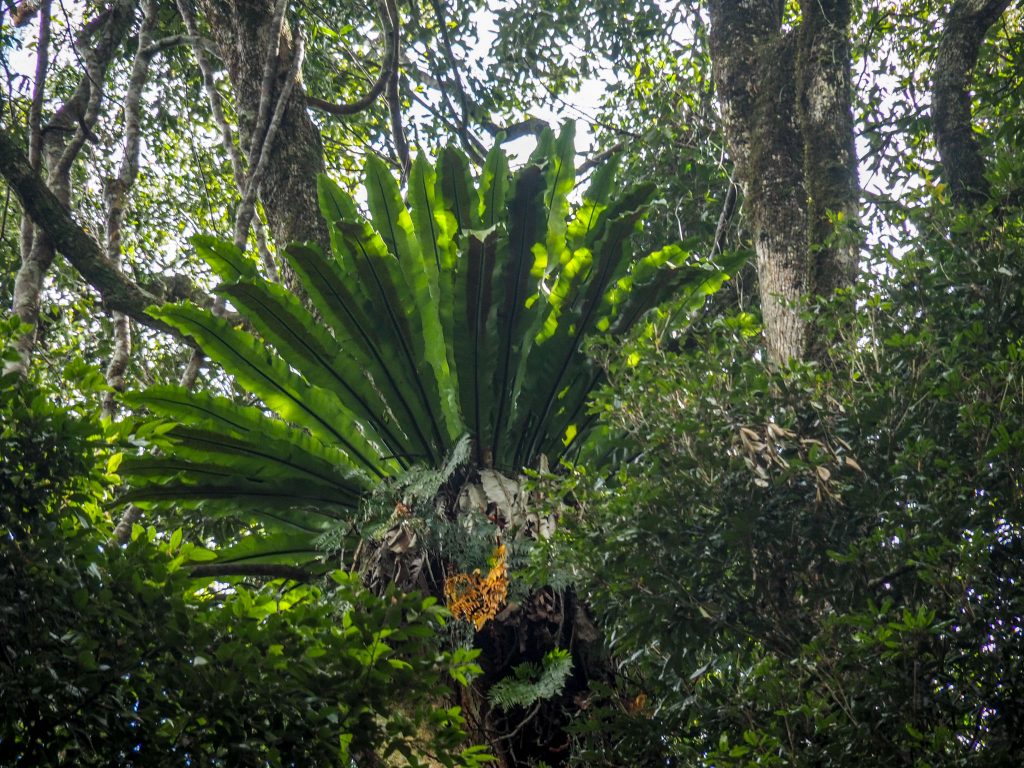 Along the way I passed a couple of Red Leg Pademelons, small wallabies, and this one was a baby only about 200 mm high. 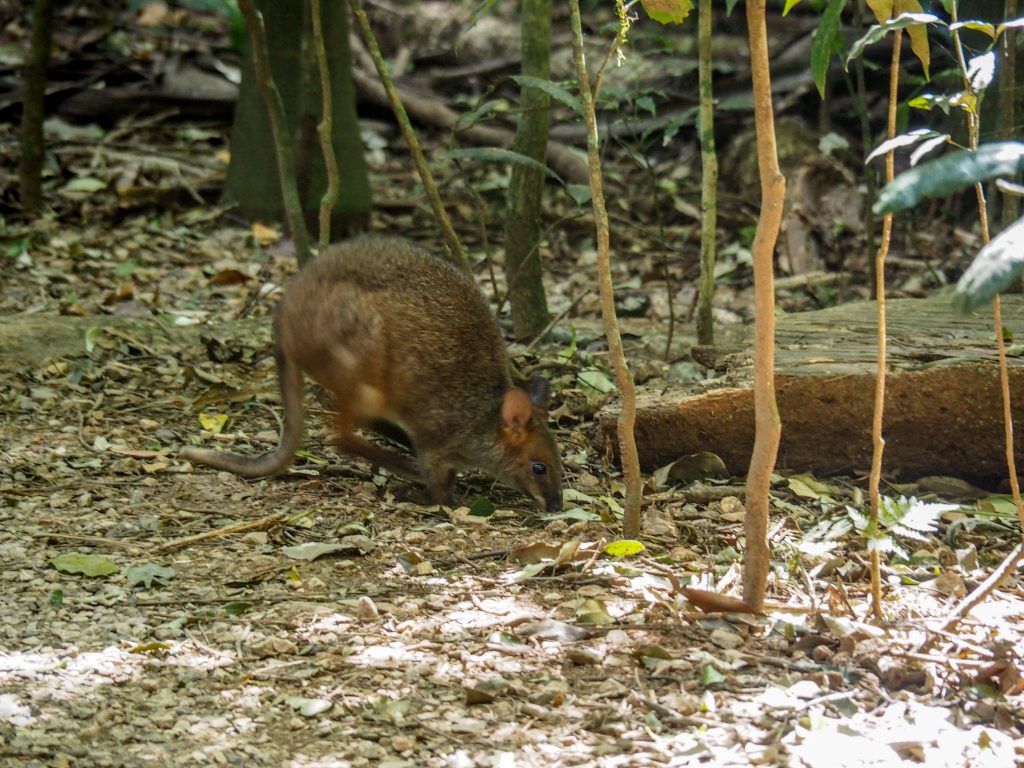 While walking around the reserve I heard a number of birds that sound like a cat meow or a babies cry.  I checked with a ranger and it was a Green Catbird.  You can hear it by pasting this link into your browser: https://www.youtube.com/watch?v=uhtXtJYW3uA and listening to the video. 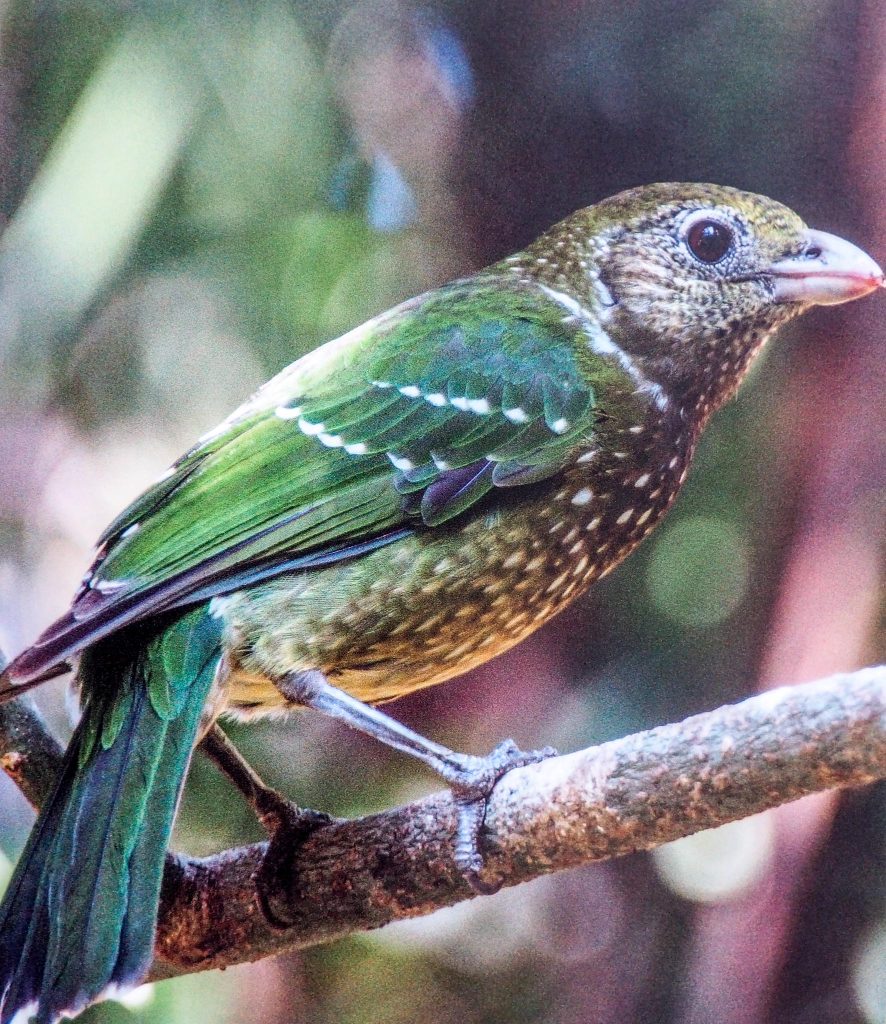 I had to be careful to not drop my camera while I climbed a tree to take the photo.  Only joking, the only timber involved was the floor of the information centre!  The view over the glasshouse mountains from the reserve was fantastic and I loved the cloud formation. 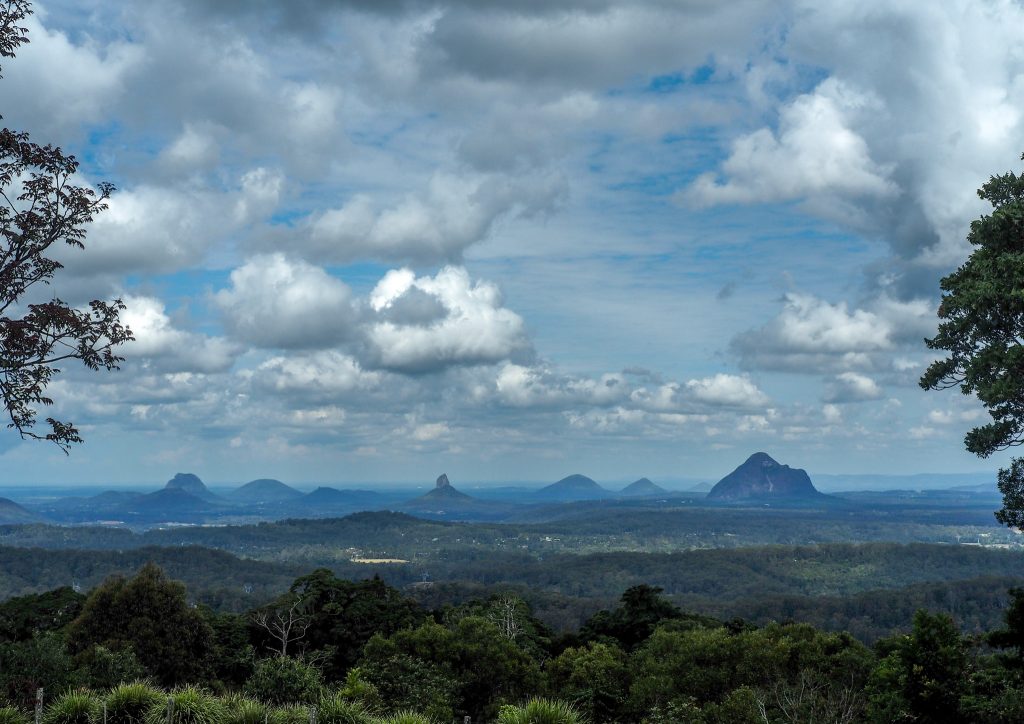 Captain Cook named these mountains and today I found out why he gave that name.  I could never work out why they got their name because they don’t look like glass houses, but they do look like the glass making kilns in his native Yorkshire, where they are called English Glass Houses, so mystery solved.  The mountains were formed in the same way as Mt Walsh near Biggenden I visited earlier.  Magma was pushed up into crevices and voids under the earth’s surface and originally the magma would have been 300-400 metres under the surface at the time.  Erosion of the softer sandstone over the eons eventually exposed these mountains as they are today.  For good measure I also took a panorama.

Today is Wednesday, I need to keep track of the days otherwise I would lose track and I have to be back in Melbourne to see the Lions win the flag!  So it was off to Bribie Island to view a couple of water towers.  The first was at Woorim on the far east side of the island.  It was excellent, with surfers on one face and a New Holland honeyeater on the other. 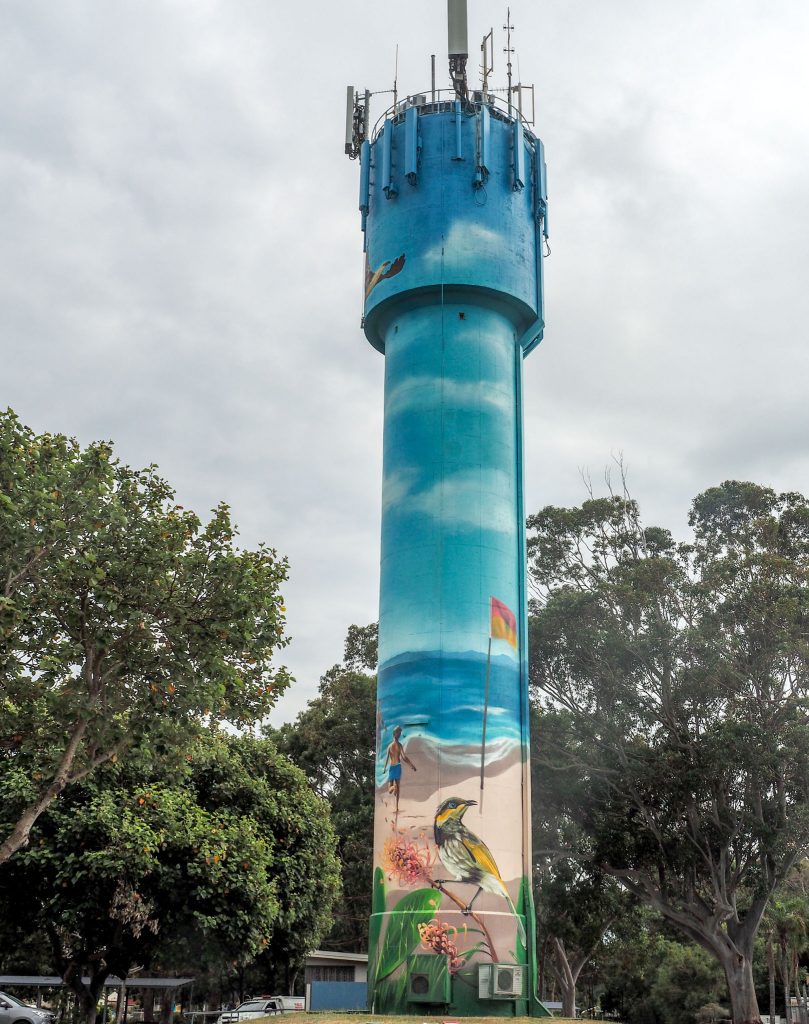 The honeyeater detail was excellent and I especially liked how well the grevillea flower was depicted. 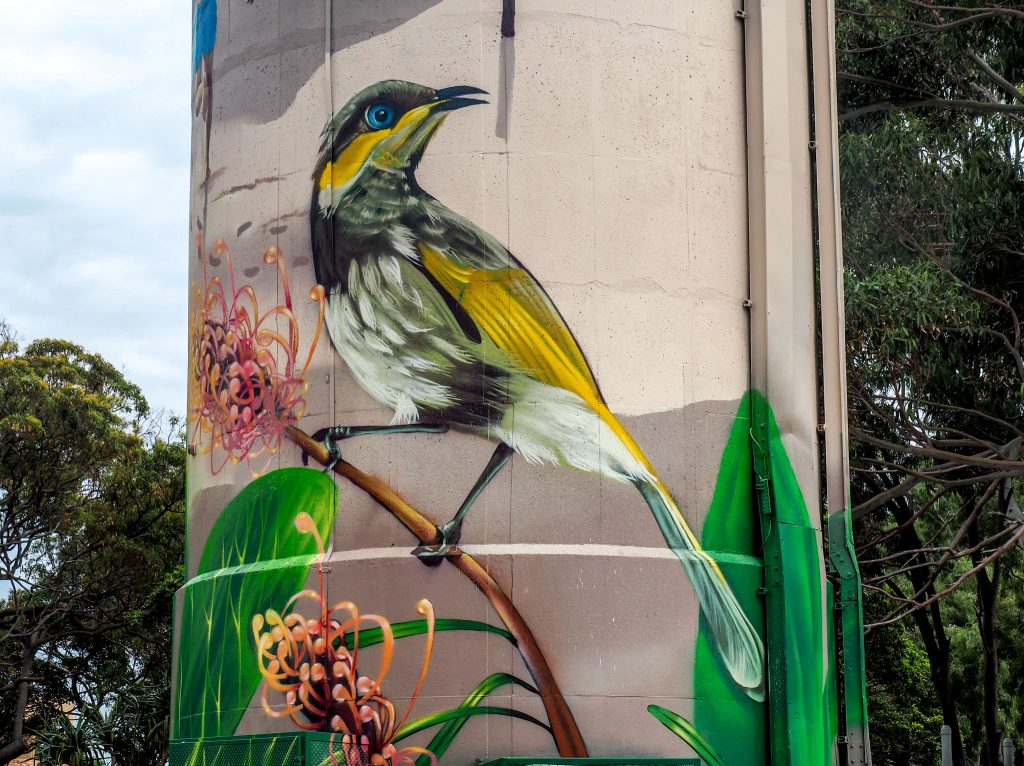 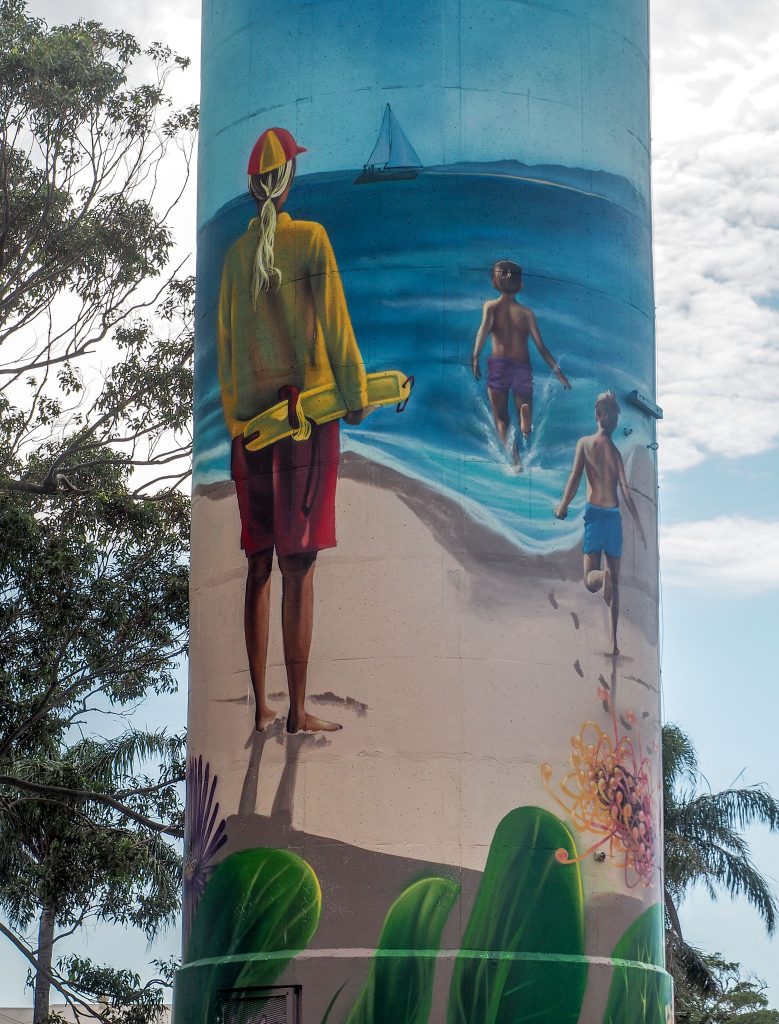 On the top section of the Woorim tower they have painted a gull in flight, you can see part of it on left top of the photo of the whole tower. 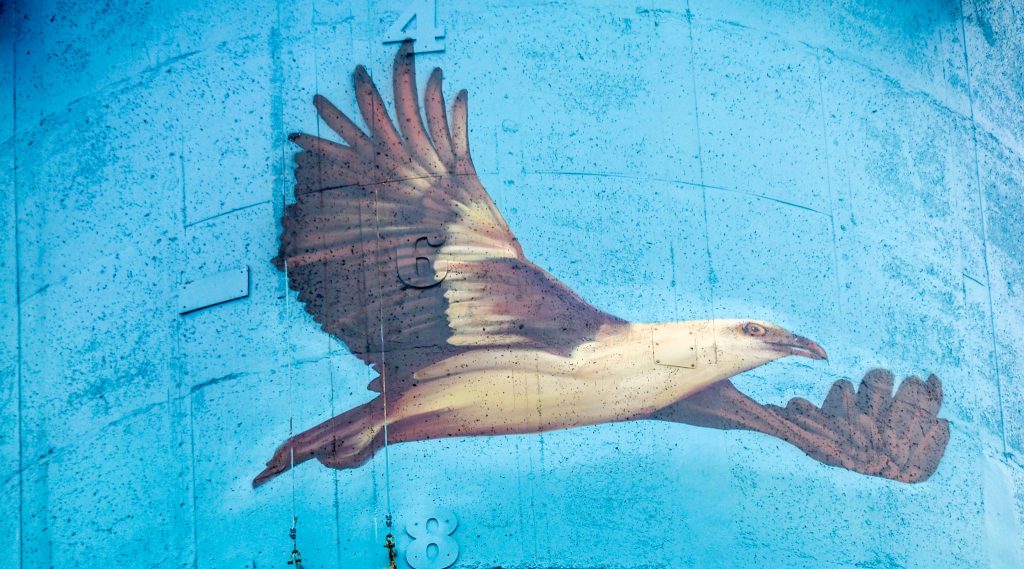 I then headed for Bongaree water tower on the other side of the island, only about 5 KM away, it’s not a big island.  In fact the northern end of the island is a very long narrow spit of sand and it is feared that this will be breached soon as water levels rise, exposing Golden Beach to the ocean and possible erosion issues.  The tower is well done but lacks the fine detail of the Woorim tower.  It is also behind a cyclone fence so I had to go into the RSL carpark on one side and a caravan park on the other to be able to take photos. 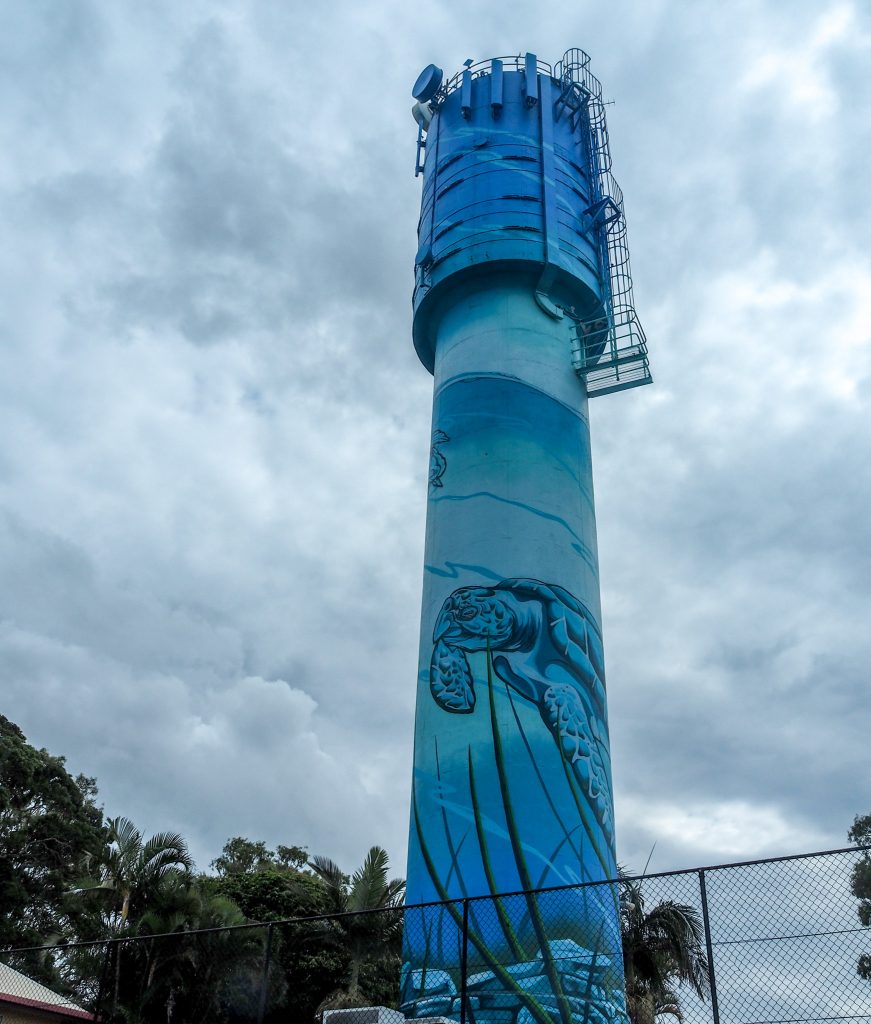 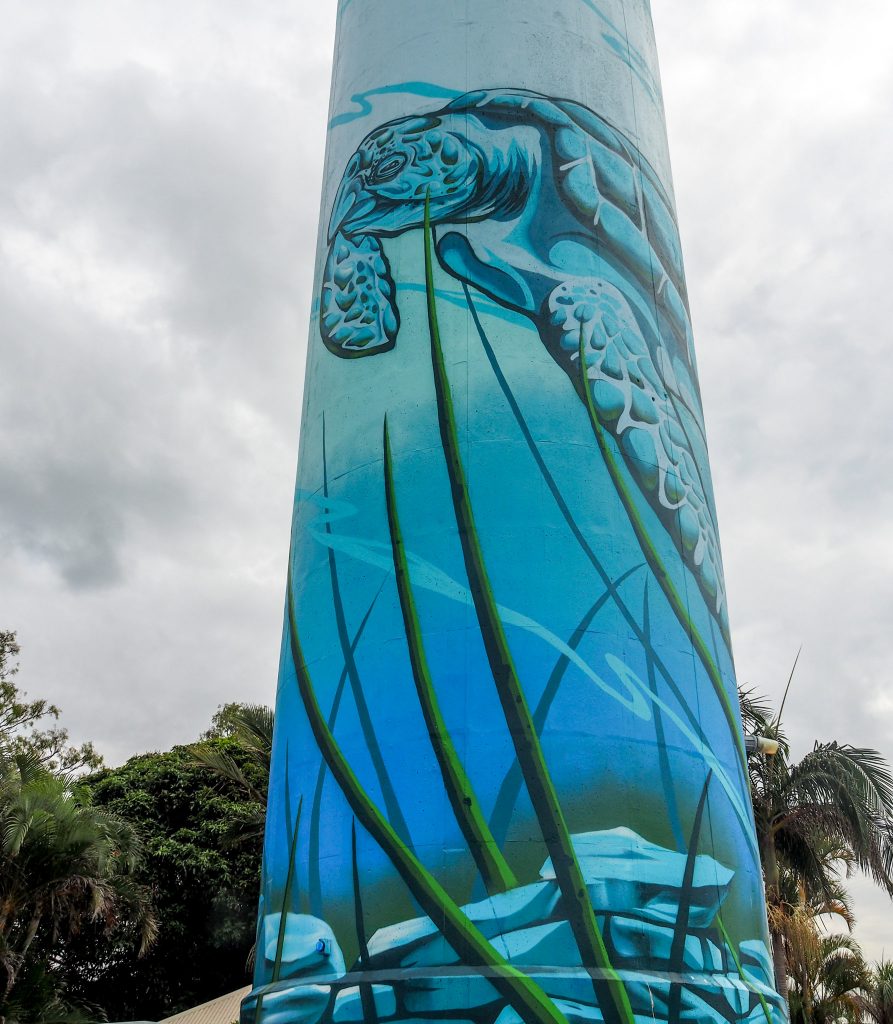 Near the top of the tower is a smaller turtle. 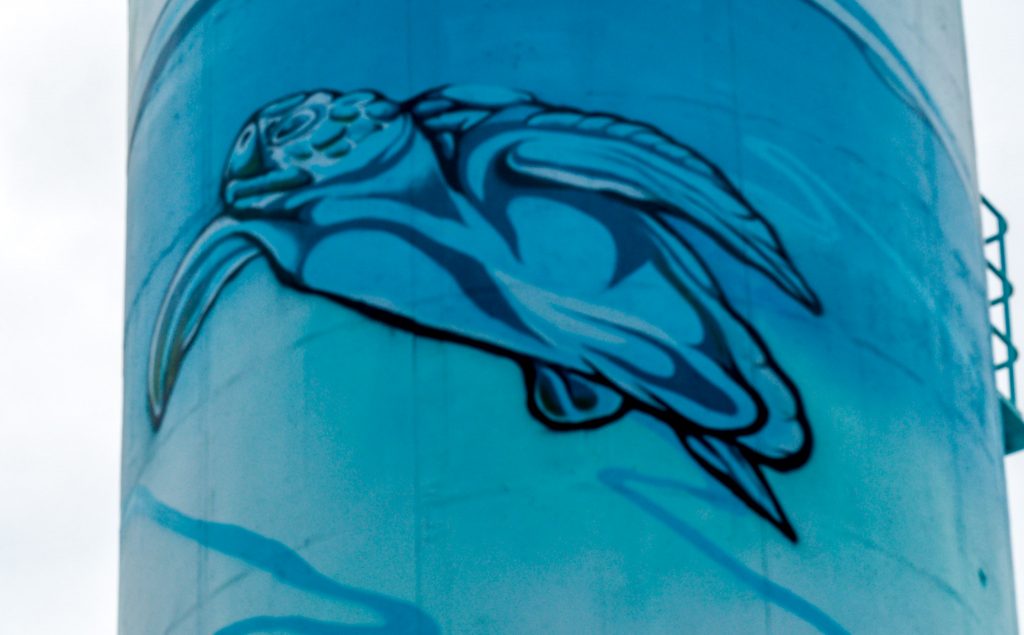 My friends of very long standing, Trish and Dave, arrive in Maleny today so we will share some good times together, and probably visit a few more places around the Blackall Ranges.