I planned 2 days in Quorn, but my arrival at Quorn clashed with a gathering of the Commercial Vehicle Association of Australia, truck geeks, so I was only able to stay for one night, as the park was booked out Saturday and Sunday nights. However I was able to bring forward a booking I had made on a nearby station, Argadells. The station is about 28 Km from Quorn and has a small camping area with 12 power sites, the owners are away so I will be here by myself for the next two days. Clint, a station worker, let me into the place and he will be back on Monday, so it will be a peaceful couple of days, no 3G or TV.

On Saturday morning all the trucks gathered in Quorn, quite an impressive line up, boys with their toys. I took a hand held panorama as my tripod was in the car, and I think it worked out OK.

Argadells have a gorge on their property, Hannemann Gorge, named after the person who owned the property from 1887 to 1910. They have put a road through the gorge, which has some spectacular rock escarpments. The owners normally charge $50 for you to drive through the property, but Clint wasn’t concerned about that and encouraged me to drive around the place, which I did. The view from the campground is toward the gorge, photo on left. Saturday was stormy with occasional showers, which you can see in the photo on the right, which is from the campground in the opposite direction. 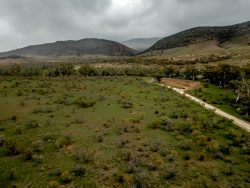 Hannemann Gorge has some spectacular rock faces with the strata layers standing vertically. The upheaval that created these ranges happened 500 to 600 million years ago, at the same time as the Flinders Ranges were formed. So the Flinders are older than the McDonnells. 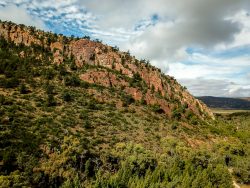 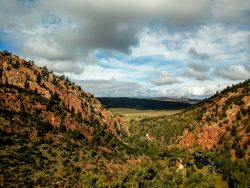 While in the gorge I was lucky to see a yellow footed rock wallaby at fairly close quarters, quite a beautiful animal. All the wallaby’s feet are yellow, as is the tail, which also has black stripes. The white flash on the cheeks is common to other rock wallabies. It was a fine-looking animal. The thing that surprised me was the tail, which seems very big and long in proportion to the size of the wallaby. 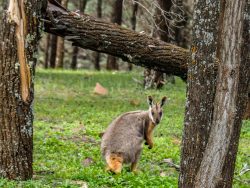 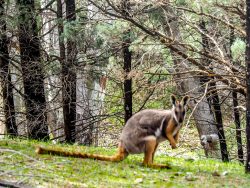 Warren Gorge is another nearby gorge, it was similar to Hannemann Gorge, but with a rougher road through it. 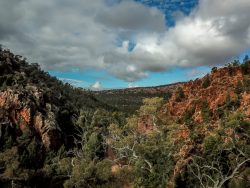 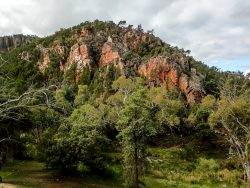 Argadells is located in the Willochra Creek Valley and the drive through this valley was very scenic. The two photos show the views from a lookout over the valley; the photo on the left is toward Hawker and the Flinders Ranges. The other photo is down the creek valley toward Quorn. 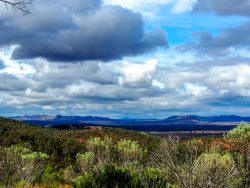 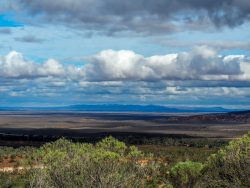 The creek is dry most of the time but apparently rises quickly and floods during storms. The flood-water can spread for a kilometre across the valley, and people have died in cars caught in a flood in recent times. From an earlier time, alongside the road is the grave of Hugh Proby, the third son of the Earl of Carysfort, who was drowned in the flooded creek in 1851, when aged 24. Cattle had stampeded in a thunder-storm and he was trying to round them up, but was cut off by the creek, which he tried to swim across on his horse; sadly he was washed away some distance downstream and drowned. His brothers and sister had the marble stone engraved and shipped out from Scotland in 1858. It weighs one and a half tonnes and they used a bullock team to haul the slab to site, a big job. 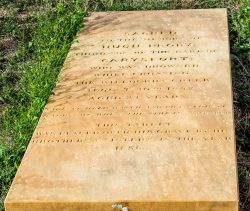 Sunday saw me on the Pichi Richi steam railway on a 32 Km journey through the Pichi Richi pass. This railway line was the original Ghan track and is preserved by volunteers since the track was relocated in 1980. The railway winds through hilly countryside and rises from 961 feet at Quorn to 1332 feet at the summit of the journey and then drops to 891 feet at Woolshed Flat terminus. It is quite a work of engineering as the line clings to steep rock-faces, goes through deep cuttings and with a lot of bridges. Lots of sharp curves at the limit of the turning radius of the steam engine.

Because of heavy fathers day bookings the normal train capacity was augmented by a railmotor and its carriage, which was hooked on the back of the train and pulled along by the steam engine. As well as that every carriage that the railway owns was pressed into service. 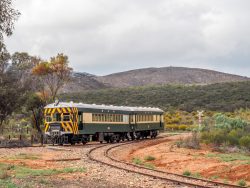 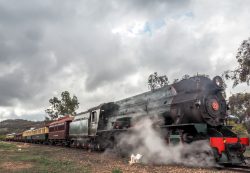 At Woolshed Flat they swapped the steam engine to the other end of the train using a spur track, which also facilitated putting the railmotor on the other end. 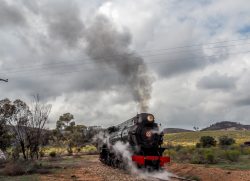 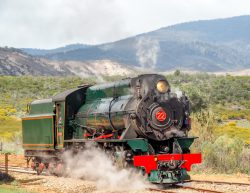 The train had to slow right down over bridges and around the tight curves, but its top speed was probably only 30 Km/hr 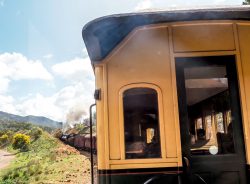 Back at Quorn we disembarked at the old station, a well preserved stone rendered building. The town has a number of attractive old buildings including a lot that look like they are old and current pubs. 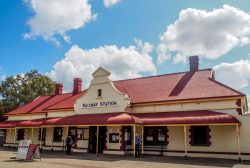 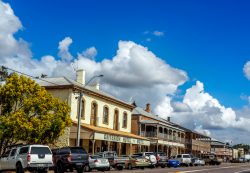 Monday I went back to Port Augusta to see the Arid Lands Botanic Gardens and it was well worth the trip. The gardens are an extensive collection of an amazing variety of Australian plants beautifully landscaped with an interlocked extensive range of walking tracks. I really enjoyed the walks, the variety of plants all labelled, and the informative signs along the way. It was interesting to read about wattles and their generally short life of 10-20 years. But the Acacia Western Myall can live up to 1000 years and is an exception. The Western Myall in the photo is one tree. 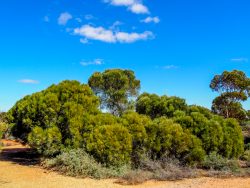 You could be taking photos the whole time you walked but here is a sample. 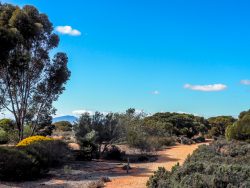 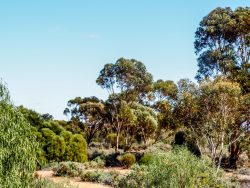 It was a bit early to see most bushes and trees in flower but there were patches of colour plus a perennial favourite of Marg and I, the Sturt Desert Pea. 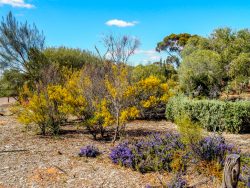 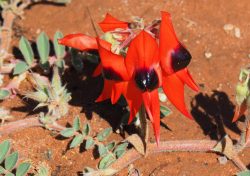 The gardens have set out an area for reflection and memories with poem on a plaque inviting people to enjoy their memories, it was quite moving. 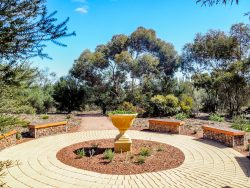 Placed throughout the gardens are sculptures that are all related to native flora and fauna. 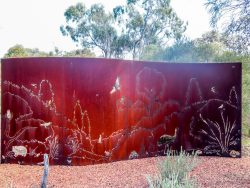 As you walk around the gardens the backdrop is the Flinders Ranges that run down the eastern side of the gardens in the distance, it is a wonderful backdrop, the photo does not do it justice.

The three arid land gardens I have visited on this trip, Olive Pink, Desert Park and Arid Lands Gardens are all different but all well worth a visit and reinforce the incredible diversity and beauty of our flora.

Back at camp I met David and Deb camping in a Kimberley Karavan, so we had lots to talk about, and Deb invited me to share their dinner which was delicious, so it was a late night for a change.

Tomorrow it will be off to Wilmington and a revisit of Mt Remarkable National Park.