I had a great time at Tibooburra. The camp commandant Sophie organised a communal campfire every night and 12-14 people gathered each night for a very enjoyable friendly chat. I was camped next to Rob and Judy, farmers from near Swan Hill and they were a lovely couple and we enjoyed lots of chats.

The road into Sturt national Park was pretty rough in places, so I think the road from Fort Grey to Innamincka will be much the same. At the moment I am the only person in the campground, which is very nice in this remote country. Lots of Coolabah trees in and around the camping area. My solitude did not last as a group of 6 caravans pulled in around 6 pm, but they were quiet, so it was a peaceful night. 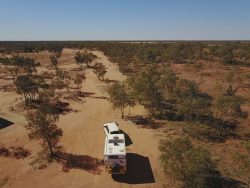 After arriving at Fort Grey I first changed into shorts and then went on a 6 KM walk to see Sturt’s Tree. He made a blaze on the tree in 1845 and it still stands with the help of 3 steel supports, which I left out of the photo. Sturt arrived here in 1844 exactly 100 years before I was born. While he was holed up here, because of the drought, three of his team explored the area and discovered Coopers Creek. As well as bringing a whaleboat to sail the inland sea Sturt also had two sailors in his team, so confident was he in finding a sea. He determined that there would be a sea by watching seabirds leaving Melbourne and Adelaide for Central Australia. 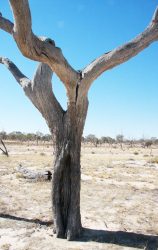 The walk was over a couple of dunes, which were the classic red colour of central Australia (that stains everything and you can’t ever get it all out). 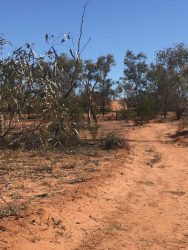 After the dunes it was across dry Lake Pinaroo, which was quite a walk as the soil was very fine and it was like walking in sand. But I made it and I had all my safety gear just in case.  The Sturt tree was on the far shore of the lake that you can see faintly in the distance. 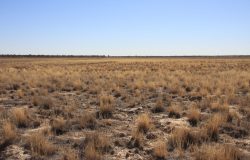 Along the way I passed a log “fence” that the graziers placed to discourage stock from crossing, it saved them from digging holes, etc for proper fences.  But in places they had erected a wire fence and used a tree to save digging a post-hole, but they still had to drill through the hard wood by hand. They were tough people. 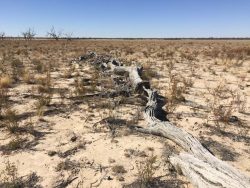 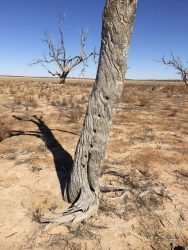 There were some beautiful parrots among the Coolabahs, I think they were Mulga or Blue Winged Parrots, and I couldn’t finish a trip without at least one photo of some wildflowers. As well as the daisies there was the occasional tiny blue flower. 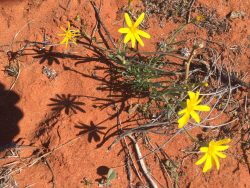