On the way to Tibooburra from Mutawintji I passed Koonenberry Mountain on the east side, Burke and Wills passed on the west side.  It is an unusually large mountain in a very flat landscape.  The second photo below is an expression of “The wide brown land for me”.  I have travelled through 100s of Ks of this type of country and on roads just like this, except rougher.  I am in awe of Burke and Wills and the other explorers who travelled this type of country that is so dry and did it without maps. 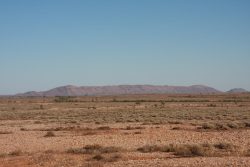 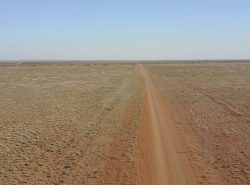 Tiboorburra have silhouette sculptures on the three main roads coming into the town, when I first saw the mustering one from a distance I wondered what they were doing by the sign!  The second sculpture is of miners. 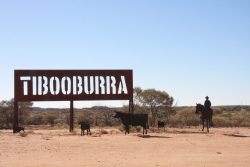 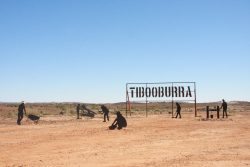 This sculpture is of explorers. 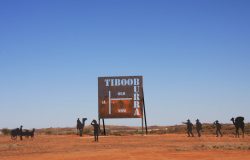 The town has also made a replica of Charles Sturt’s whale boat that he carried on a wagon to Fort Grey in Sturt National Park in anticipation of finding an inland sea.  Instead he had to spend 12 months holed up at Fort Grey until the drought broke.  The boat is copper lined and I guess it is upside down in the rare chance that there is rain. 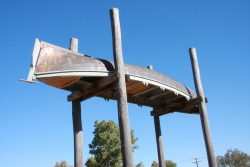 On Saturday I went on a 100 Km loop drive through the Mt Wood section of Sturt National Park.  Mt Wood was a sheep station of some 500,000 acres.  There is a display of some pastoral equipment, which I found interesting.  The photo on the left is a Walking Beam that was run by a steam engine and the beam went up and down like a seesaw with the business end pumping water from a well up to 300 feet down.  The second machine is a Whim also used for extracting water.  In this machine the log just below the circular cage was pulled around in a circle by a horse or camel.  This action wound a cable around the cage, which had a bucket on the end that dipped into the well.  As the horse or camel walked around in a circle the bucket was pulled up and out of the well.  Once above ground the water was tipped into troughs for stock to drink.  Interesting rustic structures. 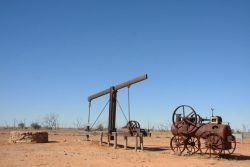 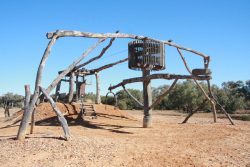 After viewing these and other machinery I drove through extensive gibber plains, no need to go far for rocks to make a road.  Along the drive there were many kangaroos and emus, kangaroos were in mobs of 30 to 40 and I clocked one big male at 60 Km/Hr, we had a bit of a race. 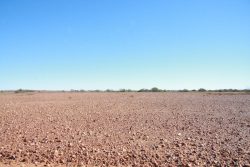 The drive then took us to a small gorge and passed Mt Wood.  It was an enjoyable drive with the road crossed by a number of dry creeks with their complement of gums and other trees. 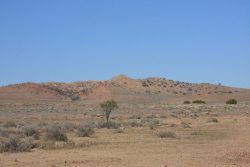 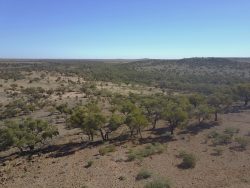 There were bloodwood trees (Grevillea Longifolia) scattered through the park and they are a very attractive tree with a dark trunk, like and ironbark, with a lovely green crown. 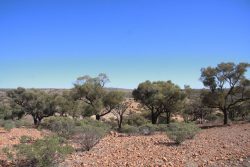 Toward  the end of the drive I crossed a vast plain and was amazed to pass a flood level sign from 1974 that had the water 3/4 of a metre above where I was standing to take the photo.  The ground slopes away from where I was standing so it was a massive amount of water in such a dry place. 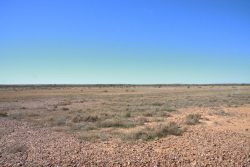 Next day was another 100 Km drive through the jump-ups in Sturt National Park.  This part of the park is more barren than yesterdays drive, if that is possible, but again dry creeks criss-crossed the landscape, breaking the monotony.  Very few animals, I anly saw 3 emus on the whole journey,  When I came across South Meyers Tank I had to take a photo, it’s the first water I have seen around Tibooburra, apart from water coming from a tap. 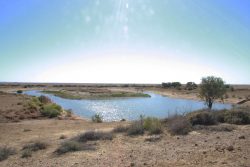 The jump-ups are flat topped hills that arise abruptly from the flat plains. 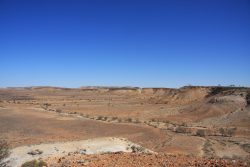 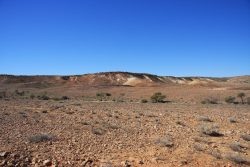 From the top of the jump-ups you get a great view of the flat stony plains. 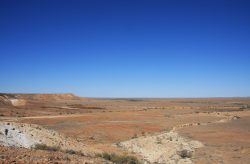 The return trip was via the Silver City “Highway” in the photo below. 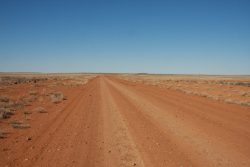 Today I walked to the top of the rise behind the caravan park with Rob and Judy, who were camped next to me and took some photos of the rugged country surrounding Tibooburra. 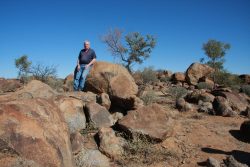 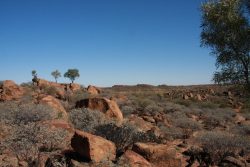 Tomorrow I am off the Fort Grey in Sturt National Park near Cameron Corner where SA, NSW and Qld meet.  I will camp there at least overnight before heading for Innamincka and the Dig Tree.