We had a very enjoyable new years eve at Walwa with good food and wine.  But we piked out and pulled stumps early, however fireworks in the park made sure we were awake to see the new year in.  Some campers decided to take to the Murray for a group float with 5 boats tied together floating down the Murray.  There was no pain being felt! 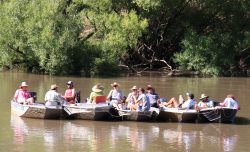 After the storms the atmosphere became very humid, which created a mist over the Murray and some wonderful sunsets. 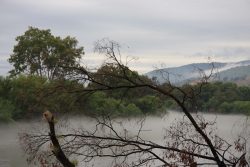 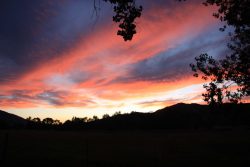 Deen and I visited Pine Mountain (in Pine Mountain Burrowa National Park) which is a monolith like Uluru, i.e. one rock, but it is 50% bigger than Uluru.  Unfortunately the trees growing on it disguise what is beneath.

So the holiday is over and I am back home at Mt Eliza, after a long drive of over 500 Km.  It was a good break and it helped Deen and I through the first Christmas without Margie.  I will be doing some mentoring work in a primary school through U3A in the first term, but after that I will head off and resume following Burke and Wills journey.

4 Comments on Walwa to Mt Eliza