After we realised that Pate and Barb weren’t returning (and there were no more questions, for us to answer from Pete’s occasional stubby bottle tops), we started planning the next few days.  Thanks to Pete, we had enough wood for our fire for the next few nights, which were needed as the weather had cooled a bit.

One day, we enjoyed a lovely meal at Harwood Hotel, just over the bridge from the turnoff to Yamba and to the left and another day, we revisited the Tavern, hoping to see Dolphins again, but the tide was going out at a great pace, so no luck.

We reluctantly left Saltwater Caravan Park, heading for Mt. Warning Caravan Park.  We were not very impressed when we drove in, but after being told where to camp, were pleasantly surprised to find a small creek running through the camp ground, a surrounding of very large rainforest trees and the sounds of many birds that we hadn’t heard before.

We booked in for a week and within 30 minutes of setting up, we headed off to a Rainforest Cafe, probably only half a kilometre down the road.  We had the most delicious smoked salmon, on a bed of crushed peas and leek and smashed potato stack.

Our table was at the edge of the creek,  amongst rainforest trees, where we spotted a magnificent Royal Kingfisher, which we actually saw dive and catch his fish.  The setting was very dark, but Russ was able to get this photo. 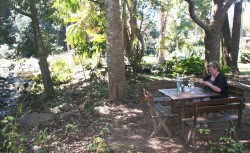 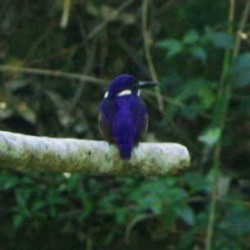 We also met a lovely couple from Queensland.  The guy was Figiian and it was his partner’s birthday.  He asked us where he could buy wood, so we ended up giving him a tomahawk we found at Yamba and they both enjoyed their fire.  We also used our compressor to re-inflate a flat tyre.  They did a five hour walk of Mt. Warning, to the summit, and they said it was a 360 degree view and breathtaking.  The last part of the walk is pulling yourself up a very steep rocky slope with the aid of a chain!

It’s raining today, but mild.  A chance to catch up with the blog and a few chores.