It’s been a while since our last post, but we have travelled quite a distance, often without 3G.  We had a great final night at Mt Beauty having a spread of anti-pasta followed by lamb and chicken souvlakis. 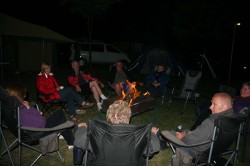 The drive up Kiewa Valley Highway was beautiful.  Victoria is so green at the moment and the country looked superb.  We turned off at Kiewa, to Tallangatta, then took a minor road, passing Mt Granya State Park.  The forests were spectacular.  From Kiewa, we had the Mitta Mitta branch of the Hume weir to the left of us for kms.  We stopped at Kennedy Reserve for lunch, which is opposite Mt Lawson State Park, on the Murray River branch of the weir.  We continued to Tumbarumba, where we set up for the night. 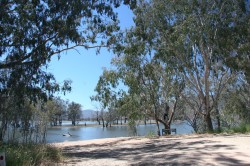 Next day, proceeded through Tumut, Gundagai, Young, then cut across to Weddin Mountains National Park.  After Tumut it was obvious that NSW has hardly had any rain.  Travelling through brown plateaus, large farming areas, with wheat being harvested, cattle and sheep being transported for sale, the beauty wasn’t evident, but there is an air that everyone is extremely busy, coming to the pointy end of their labours.

Our stay at Weddin NP was disappointing due to strong hot winds, temperatures in the mid 30s, and dirt over everything.  We only stayed one night this time.  We felt that we may be carried away by the flys that covered everything, maybe that’s how the girls disappeared at hanging Rock!

On our way to Canowindra (pronounced ca-noun-dra), we looked in on the Grenfell Caravan Park (where I broke my arm).  We wanted to see if the Council had put a warning strip on the step – and they had!!  This helps our case.  We have had an email saying that they are going to offer us a settlement.  It is a step forward from their initial outright denial of liability.

We are in Canowindra now for three days, mainly because the caravan park give you a free night if you stay two nights, and we felt like a longer stop.  It probably is a two star park, but its saving grace is plenty of shade trees.

Today we visited the Nangar National Park for our usual picnic.  An interesting drive in, with 29 dry creek crossings, on a 2WD dirt road, taking us to The Dripping Rock, which unfortunately, was not dripping.  There was grass on the ground, tables and a toilet.  Very pretty place, but not in hot weather (34 degrees) we have been experiencing. 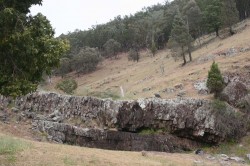 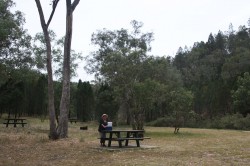 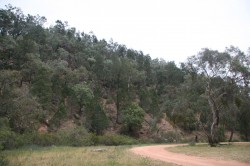