A long and arduous journey of 375kms (5 hours), at least two thirds of which was through bulldust, sometimes deep. It feels like you are driving though water or mud, and have little control over direction. Not my favourite surface! These lovely places we find to camp are often spoiled by the long and difficult trek in and out. Russ has to concentrate every minute on the dirt roads. The car and van have been handling every surface, but we find it a little tiring.

Again, as we did in Burke Town, we thought Windorah would be quite a large place, where we could pick up supplies at a supermarket, but no such luck – just an overpriced general store, with frozen bread and frozen meat. It was a bonus to find there was a caravan park, as there wasn’t a listing for one in any of our books. Park where you like, and pay in the morning!

Once we were on the bitumen, the terrain improved as well as the road.Beautiful red sand dunes, Mulgas, Sheoaks, the same lovely white-trucked eucalypts characteristic of central Australia.Wherever there is sand, it seems the vegetation is lush and interesting, with kangaroos keeping up with us at 60kms an hour.

Arrived at after 1pm, set up, went to the pub for a counter lunch, filled up with petrol at a service station, where the owner was blind. “How much?” he asked. He completely trusted us with our reply, and entered EFTPOS by touch. I patted his cat, something I haven’t been able to do for a while (the cat loved it too! 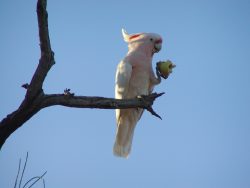