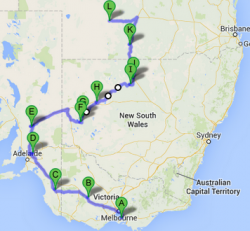 We have enjoyed our stay in Bourke.  On the second day, we called in to the butcher’s, bought some garlic and herb sausages, their famous rissoles and headed to Mt. Oxley for a BBQ.  Firstly, we had to call into The Men’s Shed to pay $10 per person and receive a code for the lock on the gate into the station.  Mt. Oxley is 150 metres high and is the remains of sedimentary rock, after erosion.  The owners of the station have put in a large cover, with a sink, BBQs and tables and chairs.  There are also lovely toilets and basins.

When we arrived, we were greeted by a school teacher and some children.  The children had to achieve good results at school to give them the privilege of the day off.  The view from the top was worth taking the narrow, eroded road to the summit.  A cliff to one side and a deep eroded gutter on the other side, just over the width of a 4WD.  You wouldn’t be able to take a van up there. 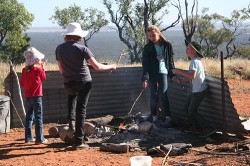 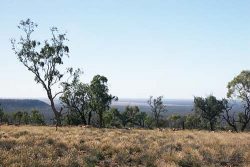 Time to move on, so headed North to Aldville Station.  It was bitumen to Cunnamulla where we had an excellent pub meal of fish and chips plus vegies – the fish was flathead.  Cunnamulla looks like a really pleasant town that people take pride in.  After Cunnamulla we travelled on dirt, but the road was long and wide and recently graded, travelling at about 80 kph, until crossing the dozens of grids.  No mud, thankfully.  We crossed the Paroo River on the way in. 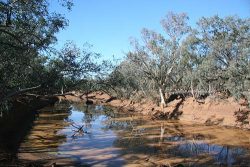 We met the owners Louise and Alan on arrival and booked in for 3 days, choosing a place to camp beside the Beechal Creek.  Fortunately we were able to power which Alan had wired to the creek to run a pump.  Just as well because the nights were freezing.  In floods this creek carries more water than the Paroo River, Allan thinks it should have been Beechal River and Paroo Creek, both are about the same length.  Allan gathered firewood and delivered it on a front-end loader.   Adam, you’d be in your element – plenty of firewood and you can light a fire where you like. 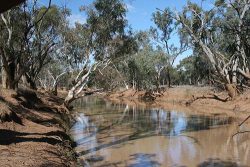 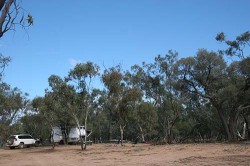 The next day, Alan offered to drive us around his property.  He wanted to see the condition of the country after having rain two weeks ago.  His knowledge of the trees is amazing – we learned so much.  There was Mulga – cows eat Mulga, which is much needed food with hardly any grass on the ground, in droughts they push over Mulga trees for cattle feed.  It grows with its branches pointing up to direct the water to surface roots.  It does not have a tap root. There’s Dogwood – smells like dog wee; Ironwood, Bloodwood, Beefwood, Box, Leopard wood, Sandlewood, False Sandlewood, Gidgee – in clay soils it the best timber for fencing as it lasts 90 years as fence posts, Brigalow; Coolabah; Hakea, several perennial burrs (forgotten the names), prickly but cattle eat it, Redgum along the creeks. We have forgotten many other trees that Allan showed us on the tour,

We were shown a Native Well, which still has drinkable water.  The aborigines dug their well in ground called top-rock.  The rock is at the surface, which generates more run-off.  They lit fires to crack the rock so they could dig it out.  This well is 7 feet deep and they were lucky to hit a spring, so it is full all the time.  Alan has fenced off the well to stop stock falling in to it. 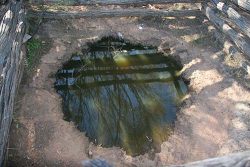 We were then driven to The Bluff.  This incredible rocky outcrop that gives views over the property and is about 100 feet high.  The goats prefer the Bluff because it is warmer by 5 degrees.  There is one species of Hakea on the property and we saw a tree at the Bluff. 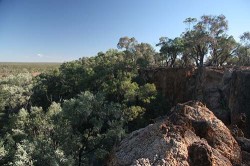 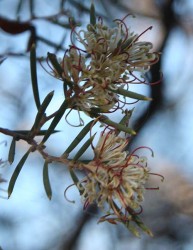 There are Feral goats, sheep and cattle on the property.  The Feral goats are mustered and return $2.60 per kg live weight compared to $0.90 for beef.  Aldville Station use a gyro copter to muster, backed up on the ground by men on bikes and dogs (the men are on the bikes, not on the dogs!).  On the way back we passed the ruins of a 4 stand shearing shed built in the 1920s. The shed and the nearby yards had been cut from gidgee and assembled together with minimum use of nails, where necessary, heavy timbers were wired in place.  Gidgee is an incredibly hard and dense timber, like most timber in the Outback, so you can only marvel at the effort and perseverance of our early settlers. 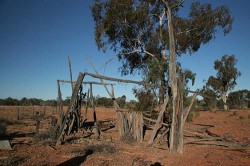 Louise and Allan invited us in for a drink after our tour and we spent a delightful couple of hours with them.  We were offered whatever we would like to drink, so a Chardonnay was enjoyed in a massive crystal glass, followed by another!  We invited them to join us the next night around the fire.

I asked Louise if she had any parsley for scrambled eggs, and I followed her around to a pot plant in her beautiful garden, were she cut the whole lot off, then she insisted that we have her chicken’s eggs, all eight of them.  She said that you need at least eight eggs for good scrambled eggs!!   Louise has made the garden around the homestead an oasis in the outback, although recent floods have destroyed many of her roses.

The next morning we enjoyed the scrambled eggs, but could only manage to use 4 eggs.  Later we did some washing and I made a Pizza for lunch, trying it out on our new outside oven/BBQ.  It was extremely successful, except I put baking paper underneath it and it caught fire!  A little smokey flavour added without trying!

Louise and Alan came down at 5pm and we enjoyed good conversation, wine and nibbles around our fire.

On Monday morning, we packed up, called in to thank our great hosts and sign the Visitor’s Book.  We were a bit sad to leave Aldville because our hosts were so hospitable and had made us feel so welcome.  We arrived at Quilpie about lunchtime and decided to stay for a week.  It will be good not to be travelling for a while.  We went and bought a pie for lunch and tonight (Tuesday) we are booked in for a pork spit roast, or beef camp oven, with vegetables, plus bread and butter pudding for dessert.  The wind is freezing, but the days are sunny.  They have advised us to ‘rug up’ tonight.  The dinner will be followed by a film of the mail man, Tom Kruse and his travels in his Leyland truck, as the first postman on the Birdsville Track.

We have 3G here, so we will catch up with all our computer chores, including end-of-year tax work.