It’s hard to pull yourself away from enjoying the mid north coast of NSW and set up the computer and type up a blog, but here goes!  So far we have had some great stops including two days at Myall Lakes NP and four days at Crowdy Bay NP. 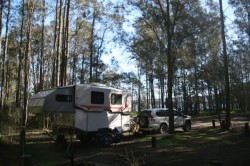 The photo is of our camp site at Myall Lakes.  At Myall Lakes we spotted orchids growing on the Sheoaks next to our camp.  Wonderful white clusters of delicate flowers about 6 metres up the tree.  They were the same as an orchid Deen gave us, so we are looking forward to when that flowers at home. 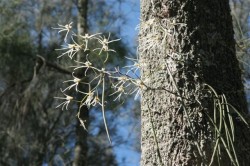 At Crowdy Bay we enjoyed the Kangaroos and the crested pigeons that visited our site each day.  We had to pack up in the rain at Crowdy Bay, we would have stayed, but another camper decided that it was a good idea to camp right against us in a camping area that would hold 50 camps, but had only about 6 sites occupied.  Crowdy Bay is well worth a visit, on the beach, plenty of trees, septic toilets, you can have fires, good fishing, walks and they sell firewood at $6/15Kg bag.

We have now moved on to South West Rocks and are camped near the old gaol at Trial Bay.  It is a delightful camping area in a State Recreation Area, which has power available, which we appreciate on the cold nights. 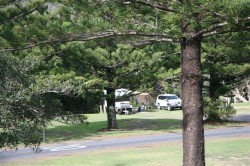 Today we went on a picnic to Smokey Cape (named by Captain Cook because of the smoke from the aborigines fires on the headland).  The lighthouse is the highest in Australia. 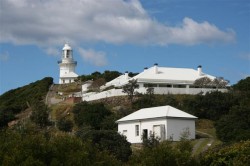 We had lunch in the camping area below the lighthouse, basic facilities but a nice bushy camping area.  We think we will book in for another 3 nights before we head to Ballina to get the Kimberley Karavan repaired again!  The electric hot water service blows the circuit breaker, we look forward to just one holiday without a Kimberley drama.

The camping area has a couple of rows of large Norfolk Island Pines and Marg has had the watercolours out trying different brushes to paint the needles, good to see her so relaxed after a very long break from painting.

It is hard to capture a good image of the old gaol, it is a splendid building with the main structure intact, but without roofs, except for the front building.  It was built to house prisoners who were to build a breakwater to give ships a safe anchorage on their journey from Sydney to Brisbane, but was abandoned in 1901 as the granite was too hard and the breakwater kept getting washed away.  In World War One it was reopened to house German citizens only to be closed at the end of the war. 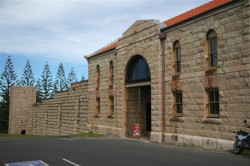 This entry was posted in 2010. Bookmark the permalink.