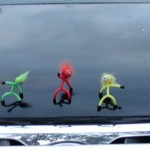 We had a very relaxing start to our holiday, using the Portsea ferry to take us to Queenscliff, cutting out the peak hour rush and tolls. The magnet men were so excited that they wanted to ride on the bonnet of the car!

Russ had a trip down memory lane, as we headed for Wallacedale, where his paternal grandmother, Susan Jaffray lived, over to Russ.

We turned off the Hamilton highway at Penshurst and headed to Byaduk where Aunty Reb and Aunty Lou lived (Grandma Incoll’s sisters). Reb was married to Vert Kinghorn and in the village of Byaduk (footy ground and hall only) was a memorial to a Corporal Walter Kinghorn, who was killed in the first world war. 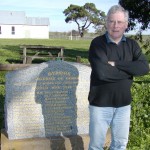 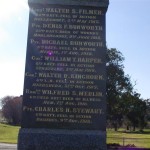 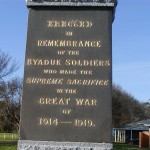 There was also a memorial to a Private Frank Suttee who was the first Australian soldier killed in the Boar War. Grandma Incoll’s sister (I think Mary) was married to John Suttee and no doubt they are related as they lived near the Kinghorns in Byaduk. 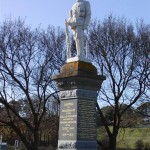 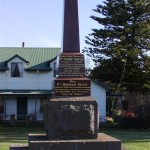 We then went to the Jaffray family farm at Wallacedale, sadly little remains except for some old iron and the roof of the scullery intact but on the ground. Even the giant peppercorn tree between the house and the stables was no longer. The farm is on the corner of Jaffrays Rd and Nixons Rd (Swamp Rd is now Nixons Rd). The distance from house site to the main drain seems much longer, but the road at one car wide seems much narrower. I didn’t feel like taking a photo of the farm, so we took one of the Jaffrays Rd sign on the corner of the Hamilton – Portland Rd), and the magnet men could not be kept out of another photo opportunity! 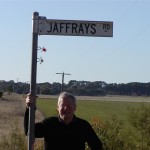 Now at Hamilton for overnight stop and got some exercise with the magnet men on the monkey bars – no comments on the big monkey please! 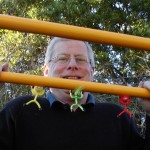