I love having a GPS, with one you can travel through a city trouble free, so my exit from Sydney was a breeze.  After an overnight at Murramarang Resort (read Caravan Park but right on the beach) I called in at Bermagui to see their water tower.  I felt it was a bit of a cheat with the artwork printed on plastic and glued to the tower, Merimbula and Eden turned out to be the same.  It was well done and colourful but I prefer the tower artwork that the artist has actually painted on the tower, as was the case for all the others I have visited.  I’ll let you judge.  The first photo is of the tower and the second a close up of the artwork.  There is a local controversy as the artist was serving 15 months gaol for domestic violence, threatening to kill his partners father, using a car to intimidate, etc. when the artwork was unveiled.  But this was unknown to the local council. 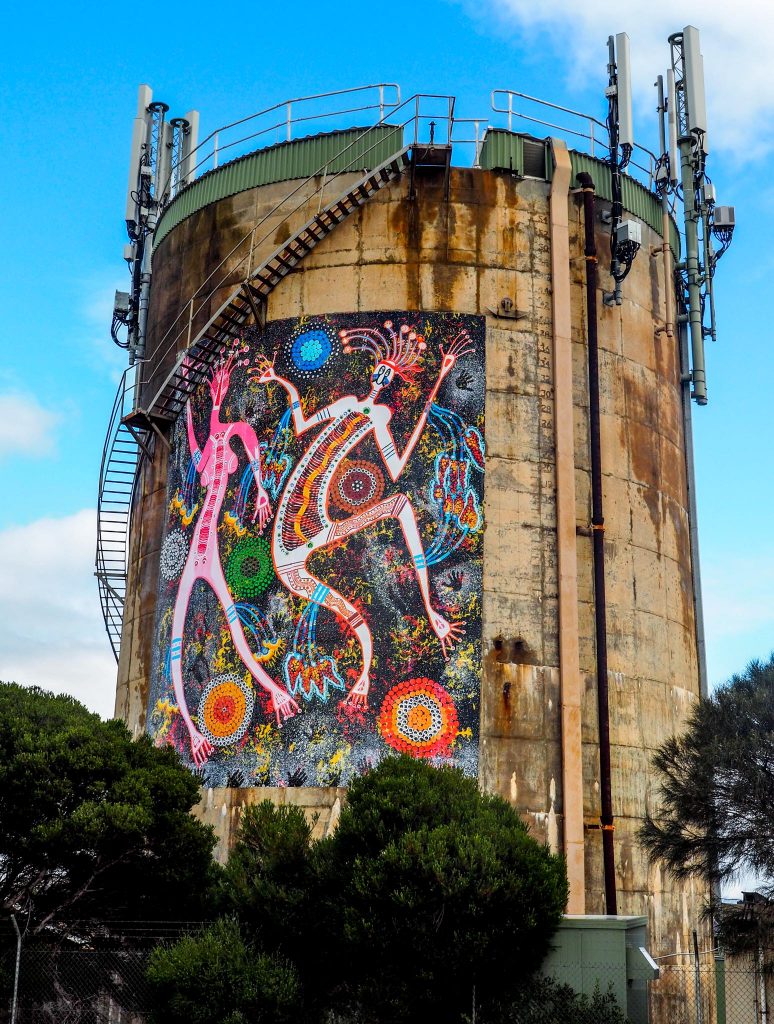 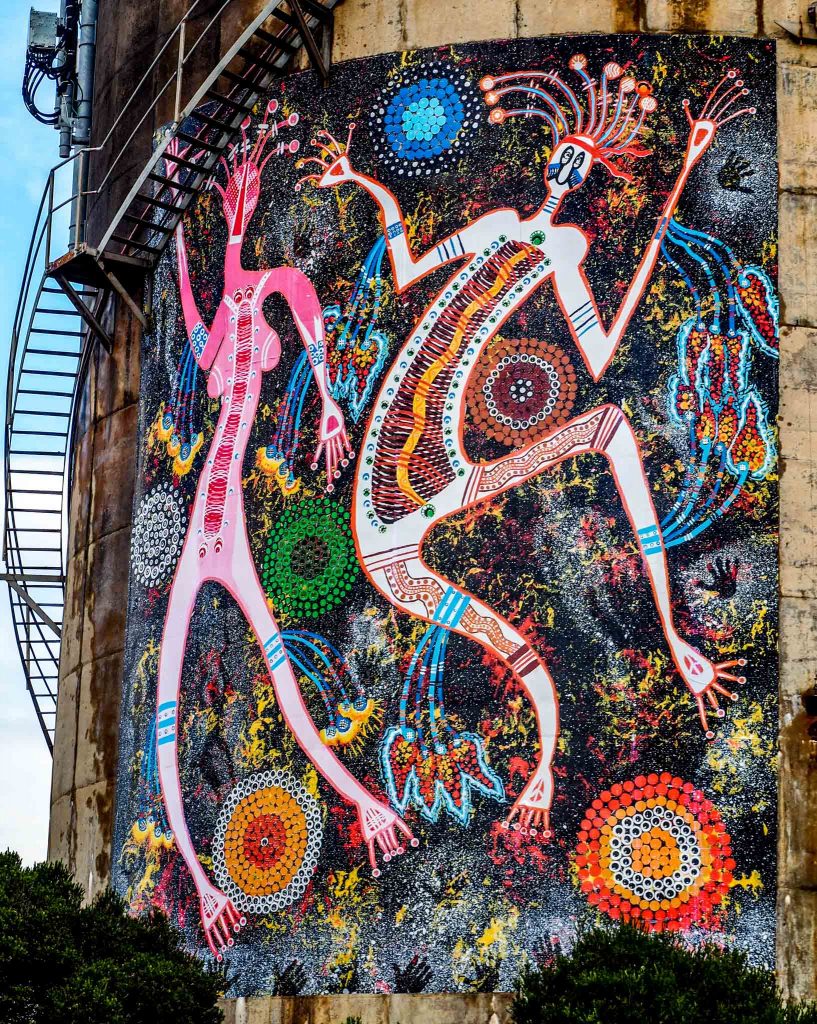 The strikingly colourful Bermagui artwork is titled Spirit Dance and was originally painted by indigenous artist Joe Mackenzie in an attempt to help his young sons Latrell and Kobe to get to sleep, with its friendly protective spirits to ward off bad spirits.

I forgot to mention that it rained at Murramarang and I had to pack up in the wet, we got about 20 mm overnight.  I suppose I shouldn’t complain, it was the first rain for 7 weeks.  It cleared up after a couple of hours but the rain started again just when I was setting up at Merimbula, bugger.

The water Tank at Merimbula is at the top of a hill overlooking the town next to the fire station.  It was colourful but again a printed artwork stuck to the tower. 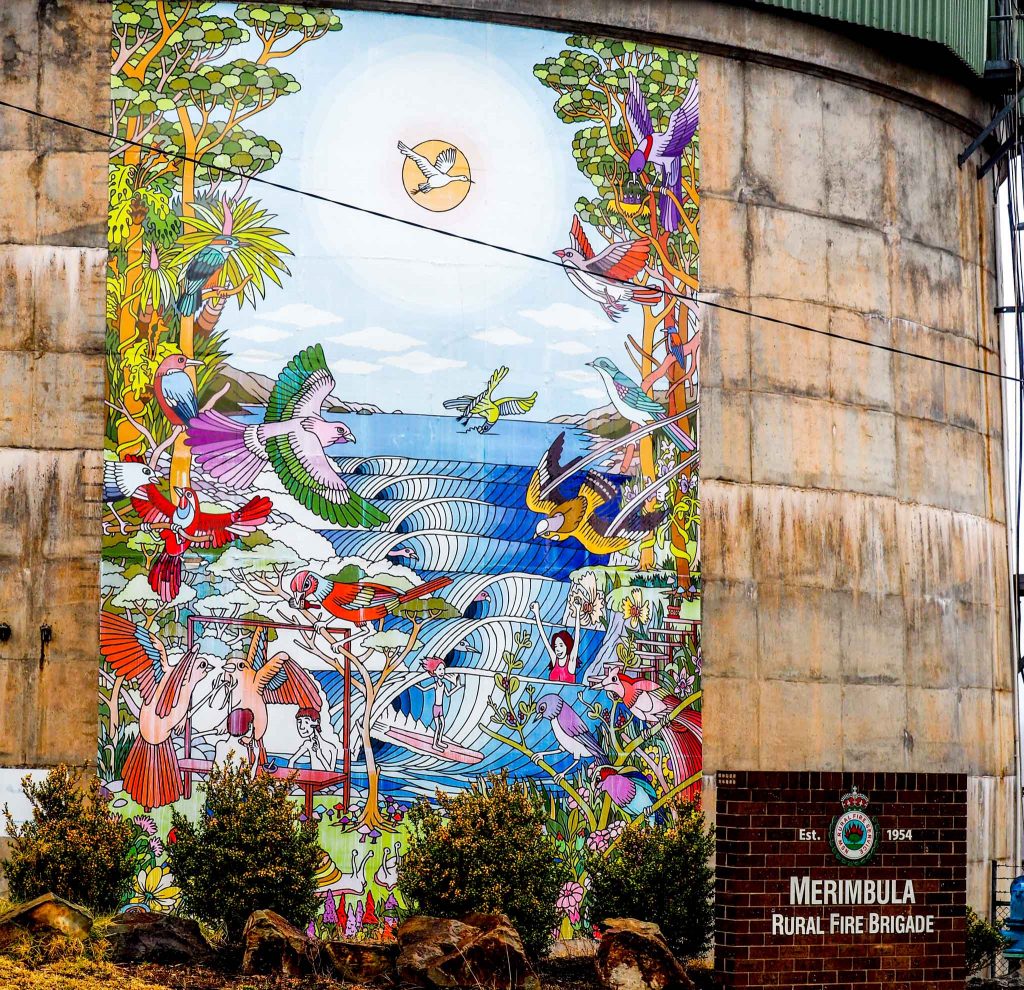 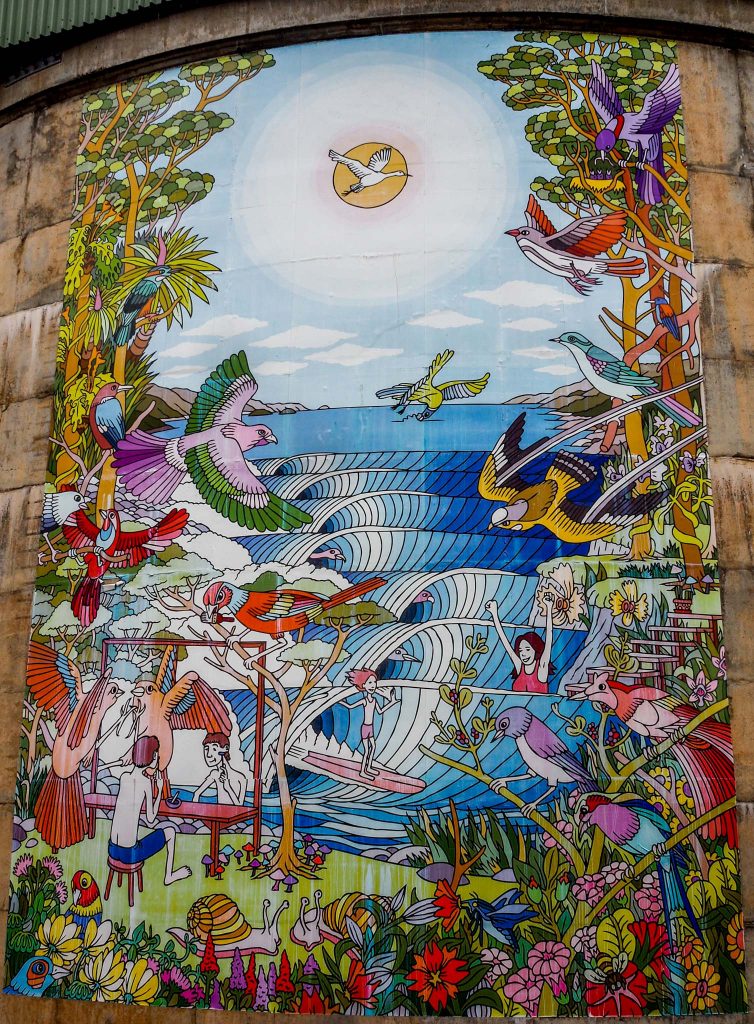 This artwork is detailed and colourful and depicts what both locals and visitors alike appreciate about living in this part of Australia.  I learned there was another tank artwork at 5 Km north of Eden on the Princes Highway so I checked that out on the way to Mallacoota.  It depicts an octopus and crayfish engaged in a fight in indigenous art style. 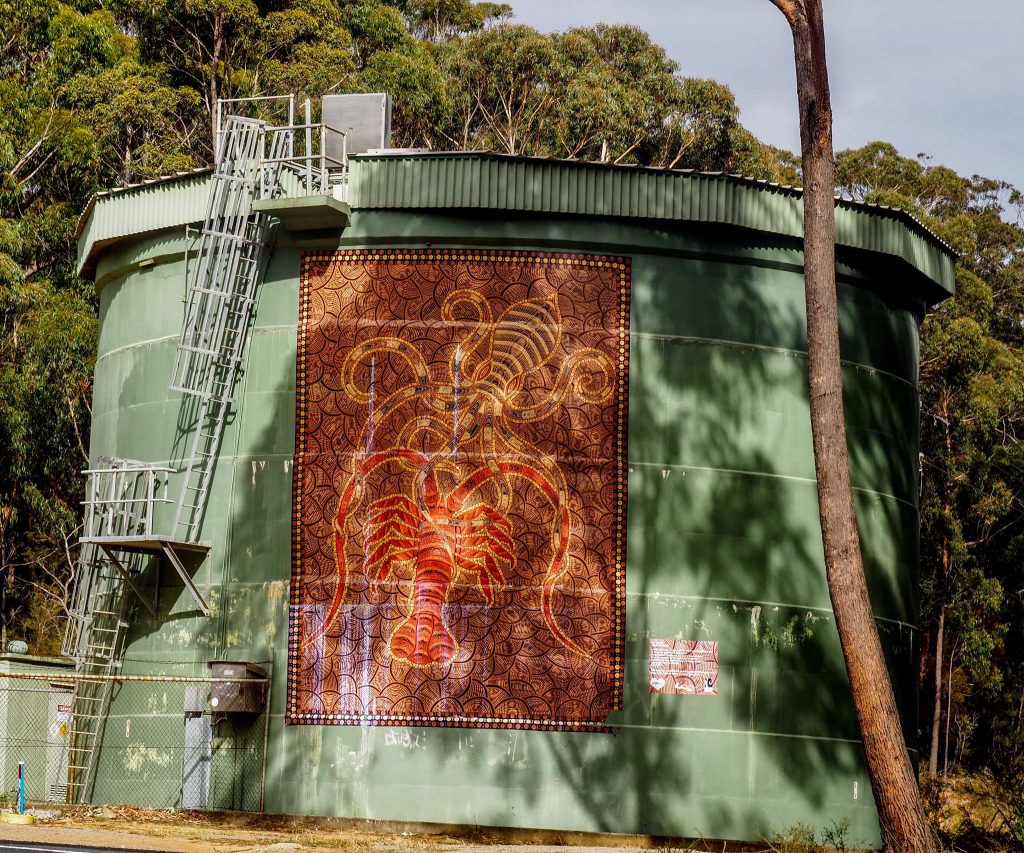 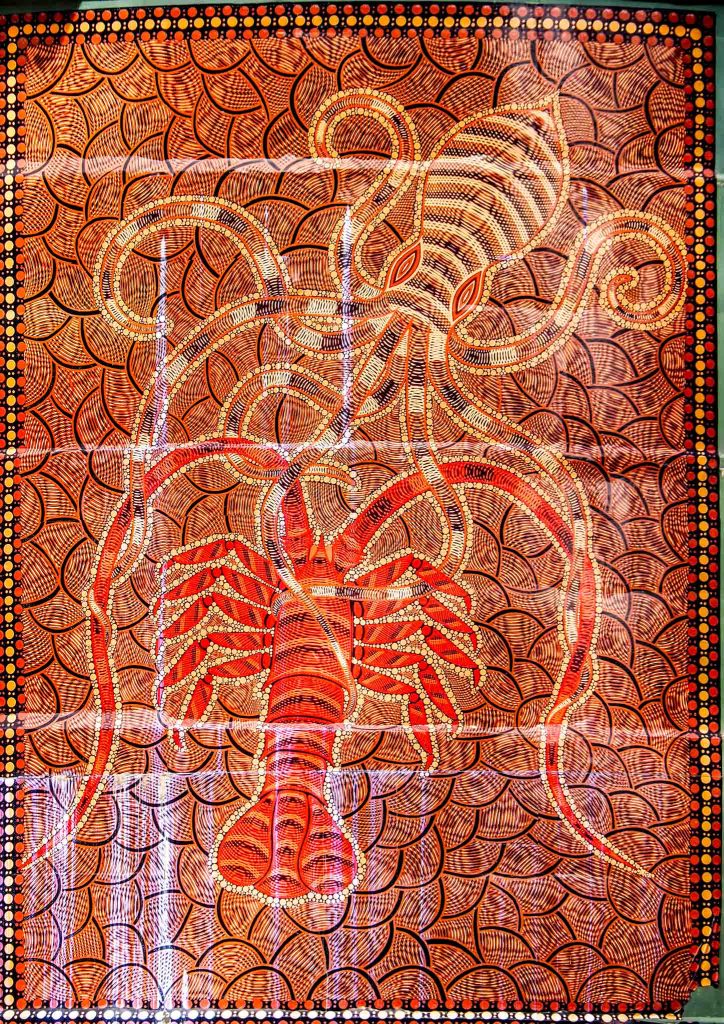 This artwork was taken from a painting completed by the artist some years earlier and the painting can be viewed in a local gallery.

I met up with Deen at Mallacoota on Wednesday afternoon where we will stay for 4 nights.  On Thursday we set off for a BBQ at Sou-West Arm on the Genoa River, a favourite spot we first visited in 1973 and many times since including with a UK branch of our family Justine, Robert, Lucy and Holly in 2016.  This time at Sou-West Arm, as well as the BBQ, we were to scatter some of Marg’s ashes.  Both Cam and Deen have ashes to scatter and Deen chose this place for her lot as it held good memories for her, and it was a place loved by Marg.

When the kids were about five and seven we stayed at Mallacoota with Barry (Marg’s brother), Cas, Sam and Bren and visited Sou-West Arm.  The kids rushed down to the picnic table and in an instant were on top of the table as a big goanna made a massive noise in the galvanised rubbish bin.  Much laughter from the parents. 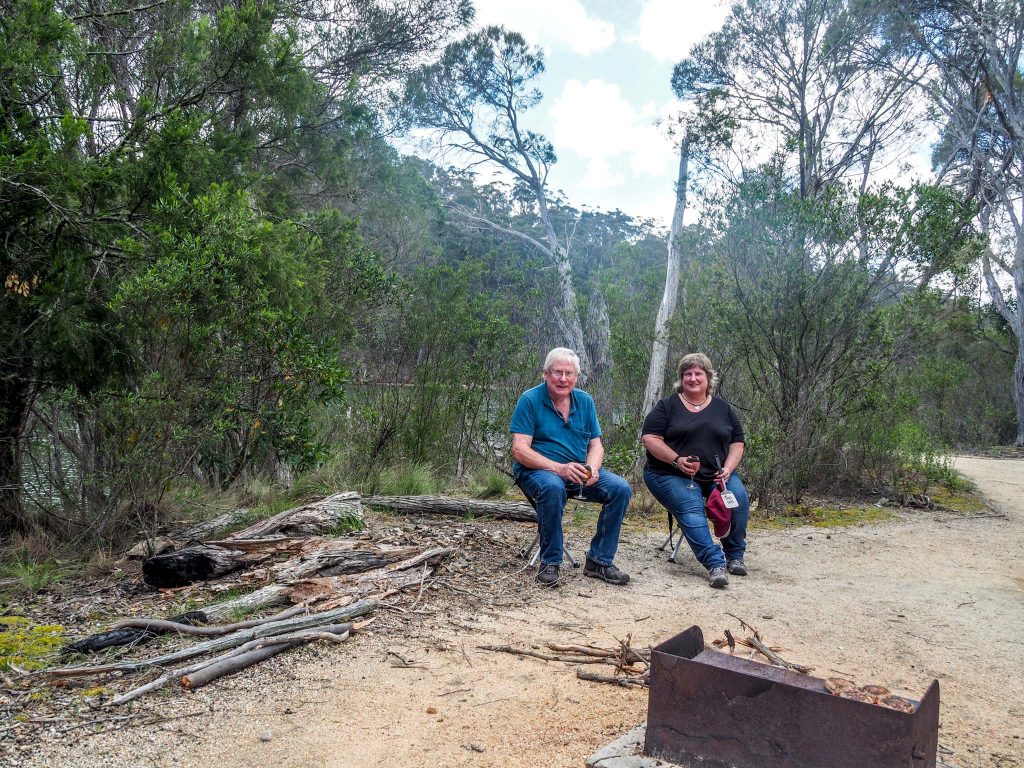 After lunch (Deens delicious hamburgers in a fresh rolls) we moved to the end of the jetty and took turns to cast the ashes, sad, but also lots of wonderful memories.

We walked to the end of the arm to enjoy the view to the upper lake.

View to the Upper Lake Mallacoota from Sou-West Arm

We were blessed with the weather for this important event, mostly sunny, 20 °C with a cooling light breeze.

There was a very strong wind on Friday, but otherwise a perfect day, so we headed off down Genoa River Firetrail to a picnic area on the Genoa River in Croajingolong National Park.  150 metre walk to the picnic area where we got the fire BBQ going.  It was such a peaceful place with a tiny Flame Robin catching our attention from time to time. 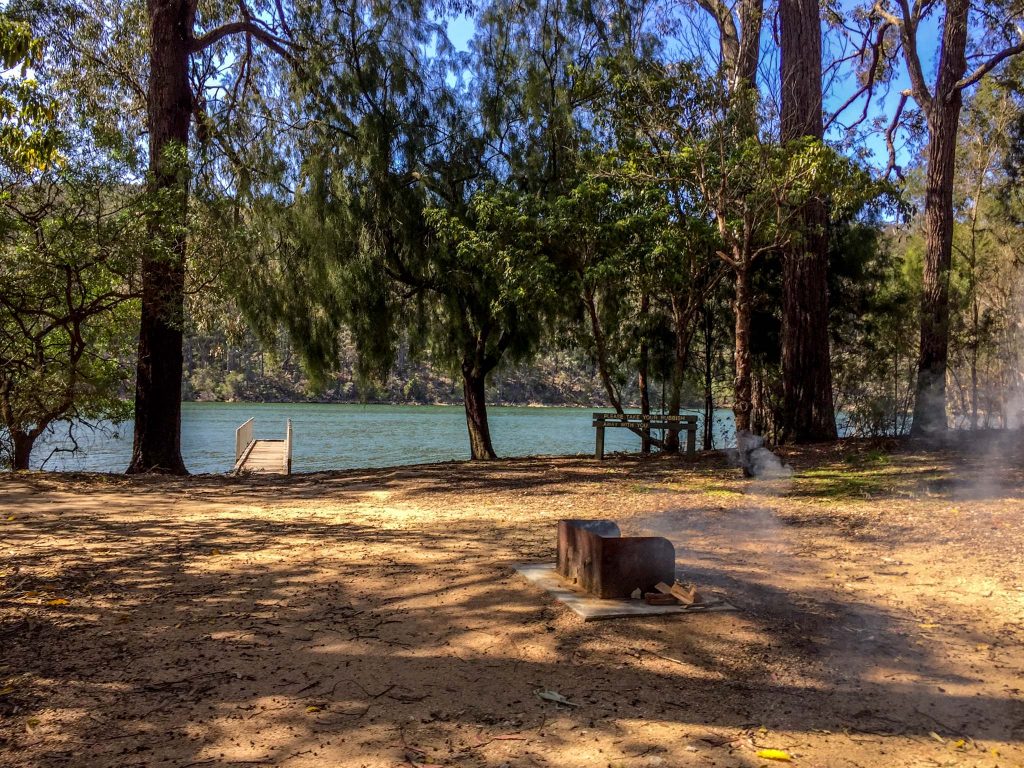 On the walk down to the picnic spot we found a White Ladies Finger native orchid, something Marg would have spotted from 50 metres, she could even spot orchids from a moving car!  A delightful tiny flower on the middle of the very dry walking track. 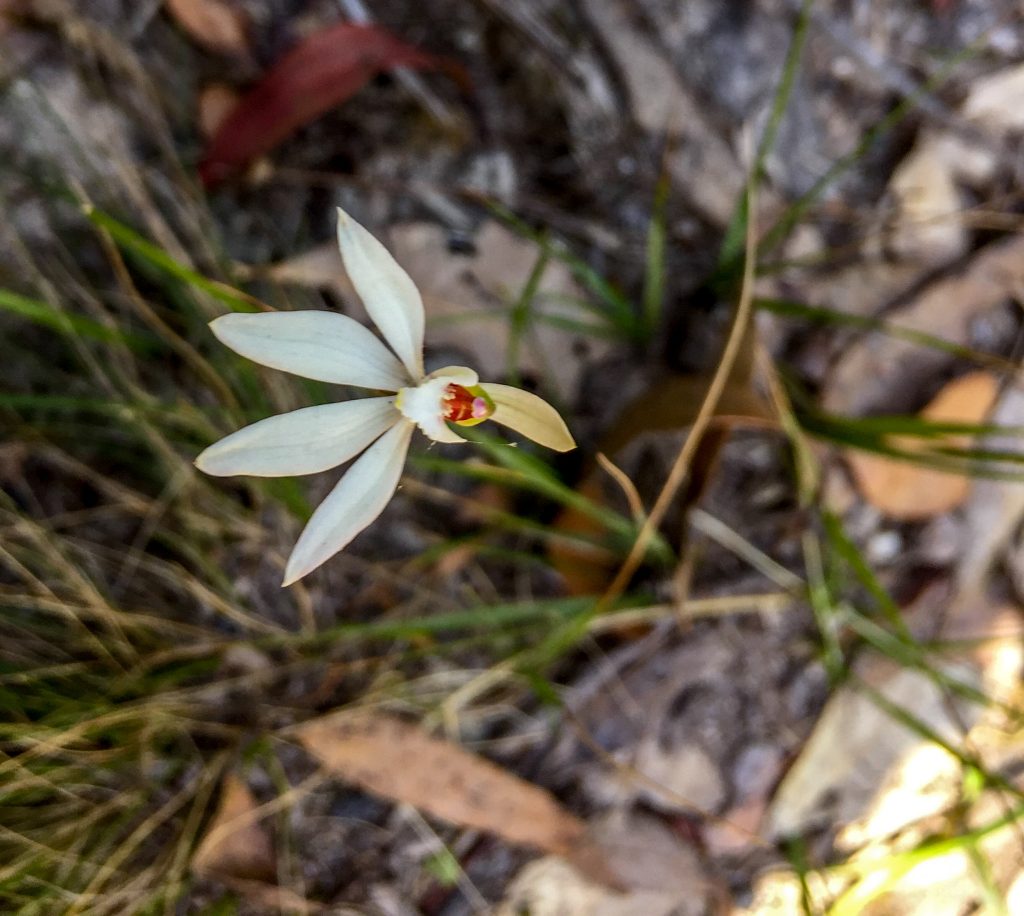 That night we got Deens TV going in her campert  watched the Tigers fantastic performance on Friday night and on Saturday decided on a restful day with a counter lunch at the Mallacoota pub would be the go.  That night we watched the Magpies nearly win in a wonderful fightback.  Our evening meals over the time at Mallacoota has been 1/2 a dozen oysters mornay each using oysters I bought from an oyster factory in Pambula on the way down.  Delicious.  Tomorrow we start the journey home to Melbourne with an overnight at Nicholson River, so this will be the last post for a while, thanks to the people who posted comments.

4 Comments on Bermagui to Mallacoota