I drove 430 Km from Coonamble to St George in southern Queensland on Wednesday.  It was sad to see bare red earth, little vegetation, and trees dying or dead, the country is crying out for rain.  Strangely there were a few paddocks with crops going OK, but others with crops barely out of the ground and browning off already.  On the news this morning they reported that Stanthorpe (Qld) and Gunnedah (NSW) have only ten days water remaining, no doubt there are other towns as bad or worse.  On the way I passed a signpost to a town “Come by Chance”, I guess that says it all about the size of the town.  I did consider going to see it but I was worried I may miss it!

The big industry for the St George Shire is cotton and the roadsides are scattered with little puffs of white.  I don’t like the massive water dams on every property when I think of all the problems the NSW farmers are facing and the state of the Darling river.  Exporting cotton and rice is like exporting water from the driest continent.  Surely we can grow dry land crops of crops that need much less water.  What makes it worst is that a lot of the biggest farms are overseas controlled.  Cubbie Station is 51% owned by a chinese company, it is the biggest cotton grower in the southern hemisphere.  Profits go overseas with our water.

St George is a small town on the Balonne river which has a weir about 7 Km south of the town so it is quite full but not flowing.  I am camped at at Kapunda Fishing Camp right on the river 9 Km north of St George.  It has basic facilities plus power but little need for that as last night dropped to only 11 °C and today it will be 24 °C.  Only four other camps here so it is very quiet.   After I set up I went to a winery near the town, Riversands, which makes a range of white and red wines and a vintage port, which was what attracted me to visit the winery  Their Chardonnay and Shiraz were good but the port was more like a tawny, but I still bought a couple of bottles, I doubt they will make it back home!  The photo below is of my camp at St George. 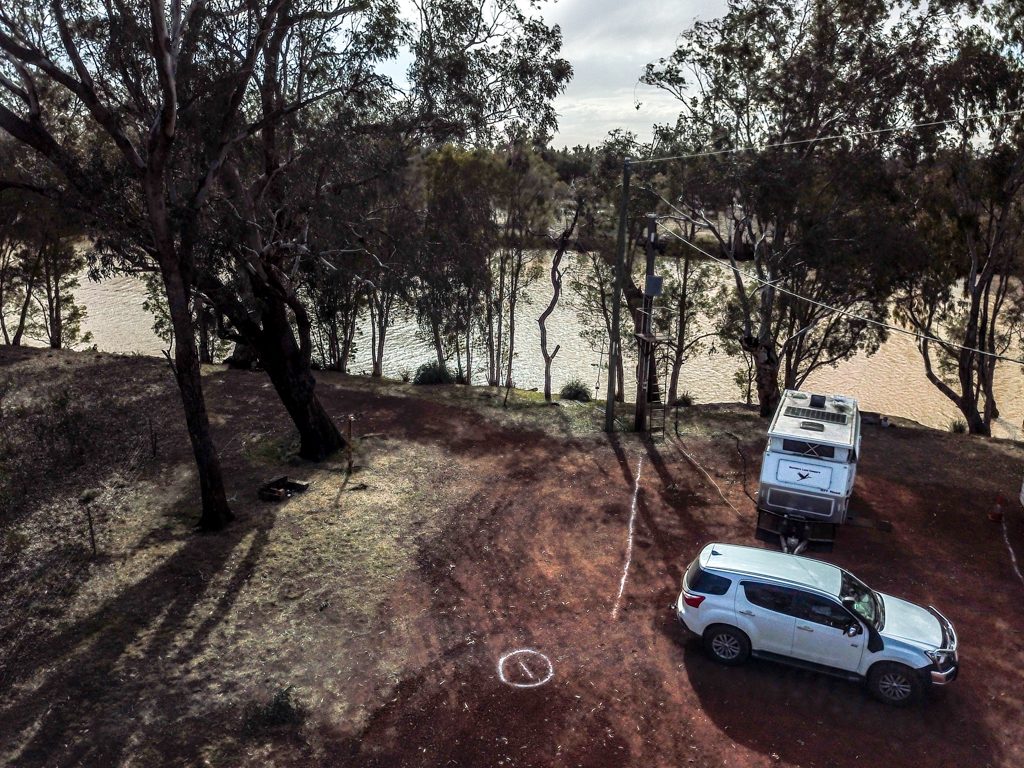 Today I drove to Thurston National Park, a 220 Km round trip, it is an undeveloped park renowned for its birdlife.  Sadly when I was there I didn’t hear a bird so it was not a successful trip.  Maybe I should have guessed that with the drought the birds would have moved out.  But I put the drone up in very gusty winds and took the first drone photos of the trip.  The 20 Km drive off the highway is on a fair dirt road, but the seven gates each way got a bit tiring. 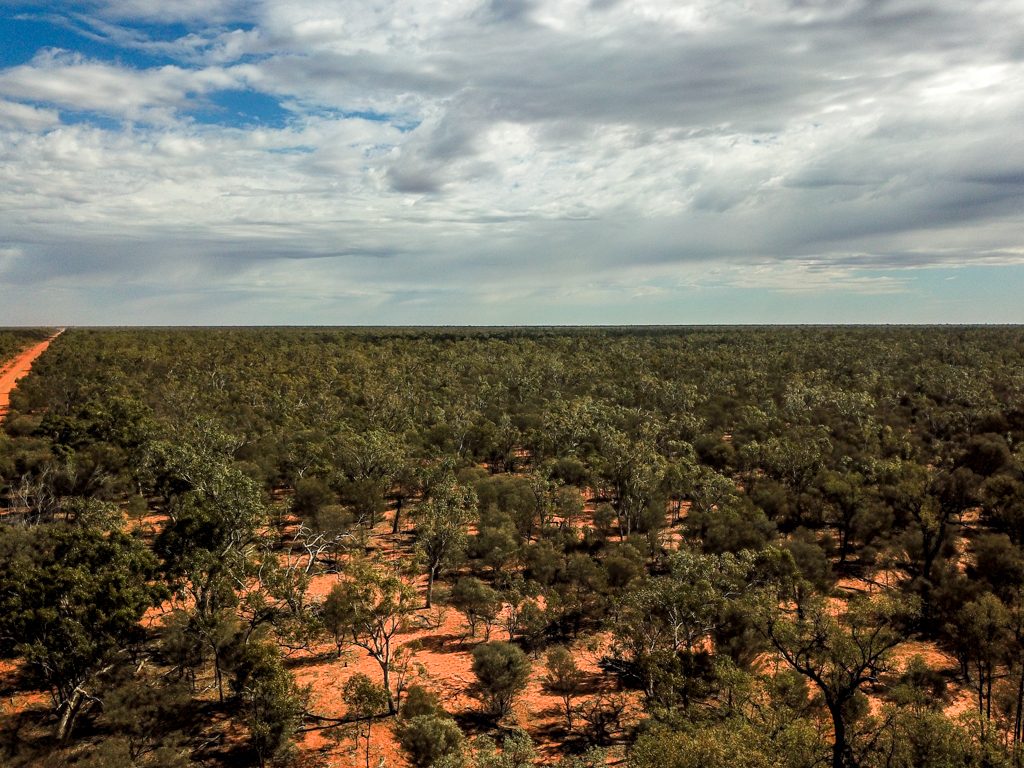 Back in St George I visited their riverside picnic area and it was good to see some green grass.  Very well maintained area with lots of tables and a free BBQ.  There was also a flood marker showing the height of the floods over the years.  The biggest was in 2012 at 13.95 metres and the river flow at that time was 328,000 megalitres per day an incredible volume, about two thirds of a Sydney Harbour per day!  The top of the flood marker was about five metres above my head.  The bottom marker is the height of the bridge which would have been four metres under water at the flood peak.  Most of the town had to be evacuated to Dalby until the river subsided.  Old timers say the 1890 flood was higher, but the flood marker was washed away so it is only conjecture. 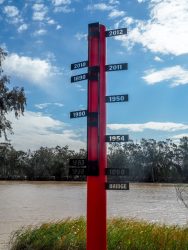 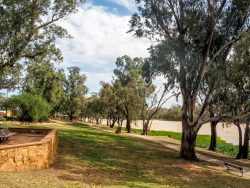 The photo below is of St George in the the 2012 flood (I did pack my time machine for this trip). 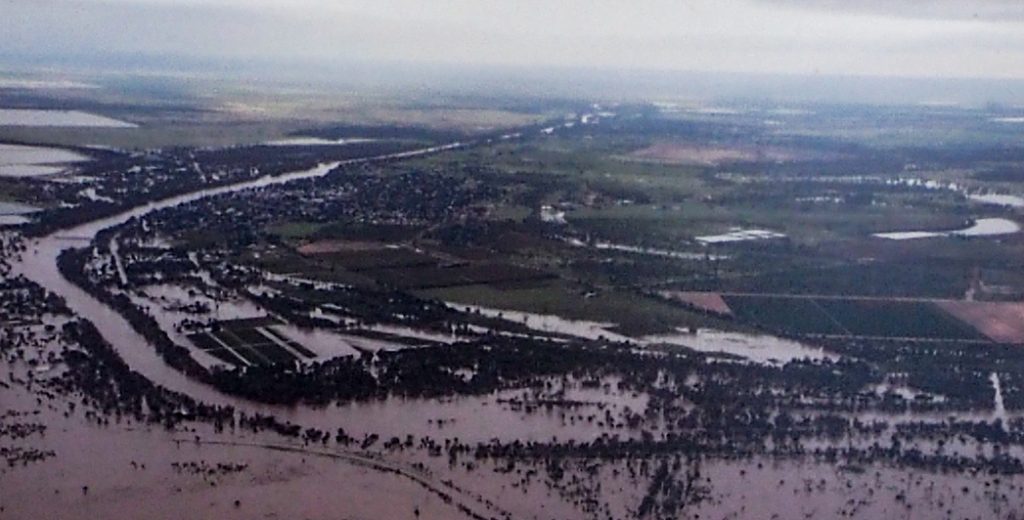 Today, Friday, I set out to Thallon about 80 Km south-east of St George.  The silos there are called “the waterhole” and depict the Moonie river, wildlife, trees and sheep, with a sunset in the background.  The painters are two Brisbane-based artists, Travis Vinson and Joel Fergie.  The silos look great as you approach the town from the distance. 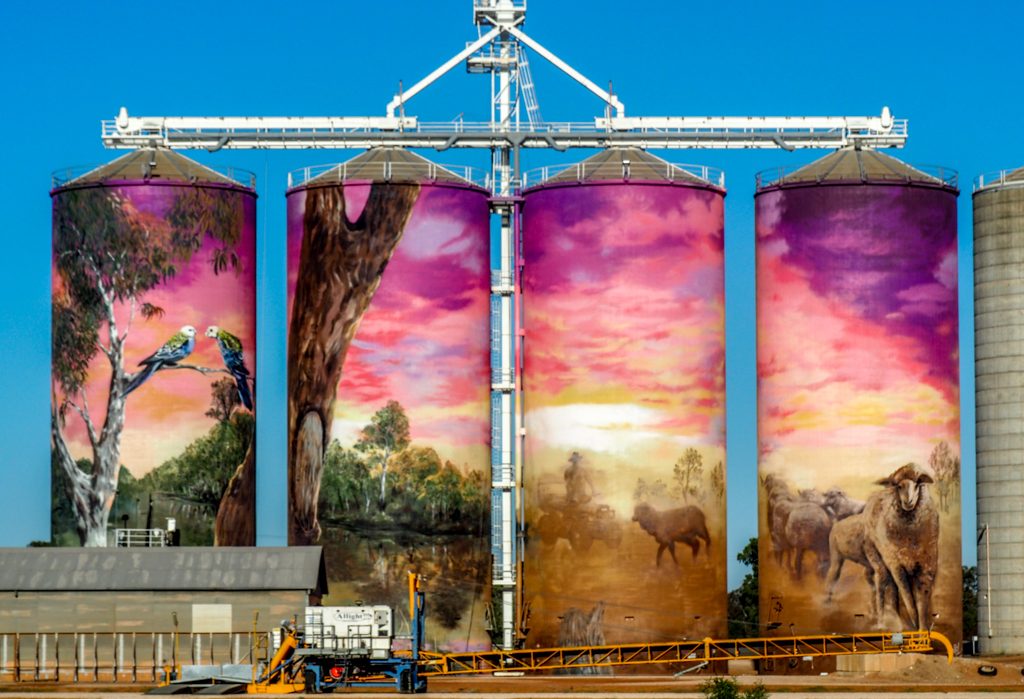 A couple of closer views: 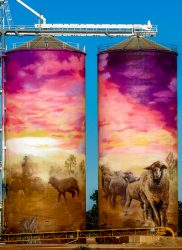 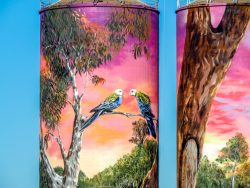 On the way I called in to Ninidigully to see the historic hotel, established in 1864 it is the oldest continuously licensed pub in Queensland and is on the banks of the Moonie river. 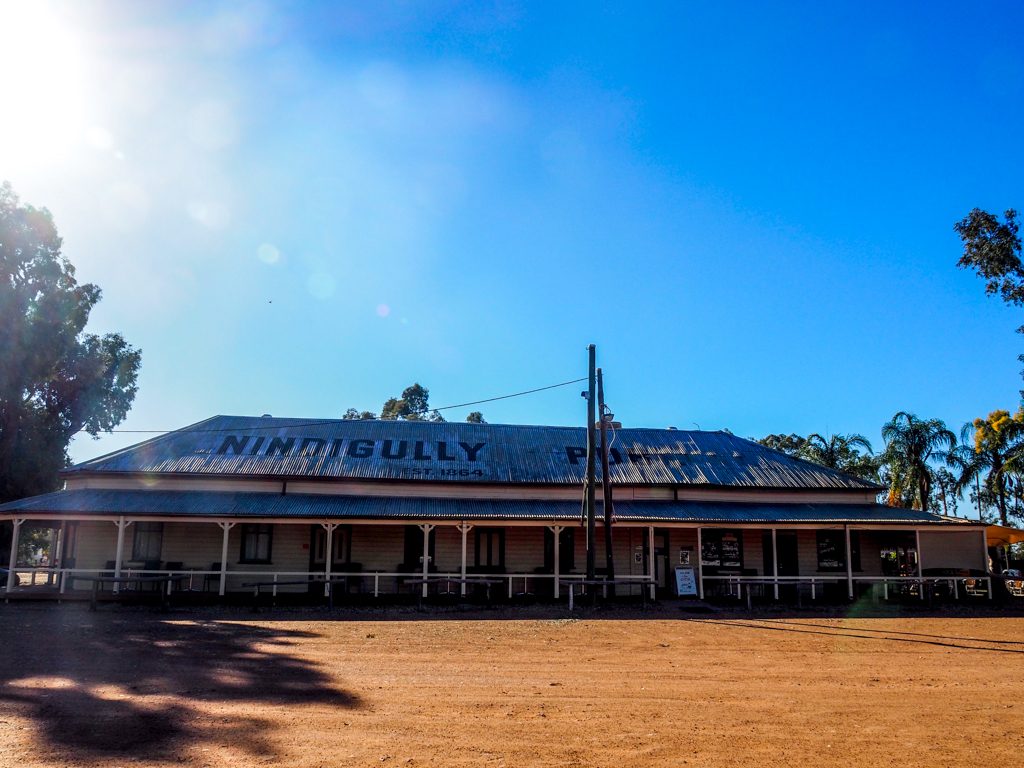 From Thallon I travelled from through Goondiwindi to Yelarbon where I will stop for the night at the recreation ground – $15 a night with power and water, clean but small amenities.  The silos here depict a boy playing in the Yelarbon lagoon “when the rain comes” and floating a boat he has made out of a newspaper.  Four silos have been painted with another three having been cleaned and painted white ready for more artwork. 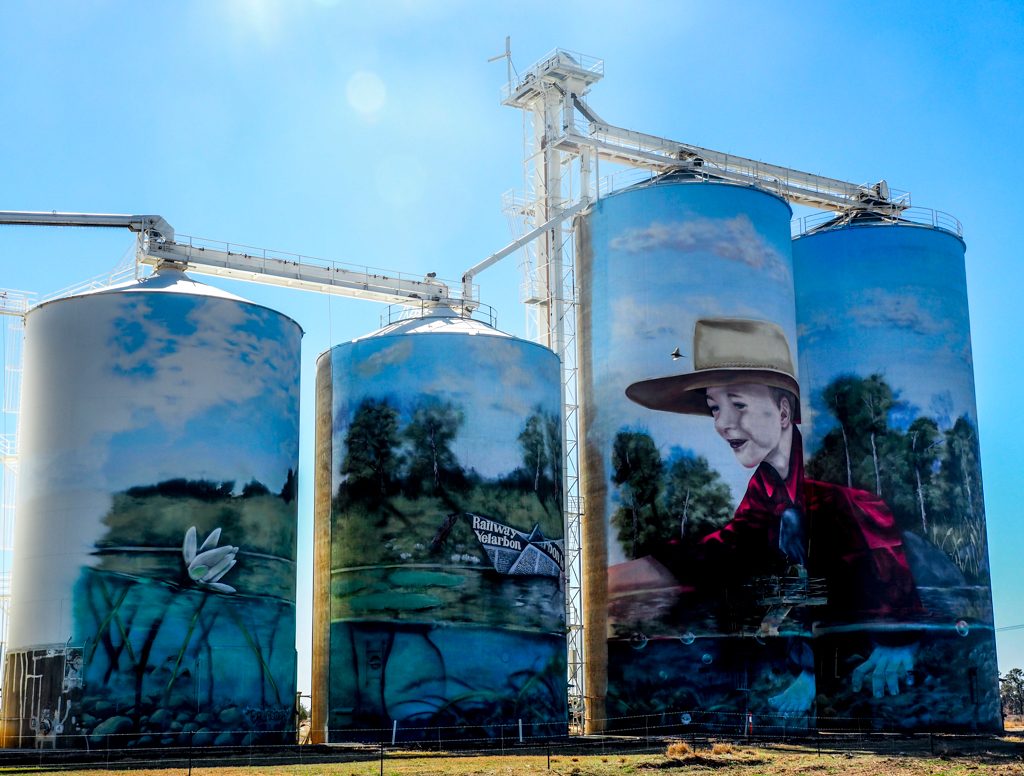 The boy is painted across two silos. 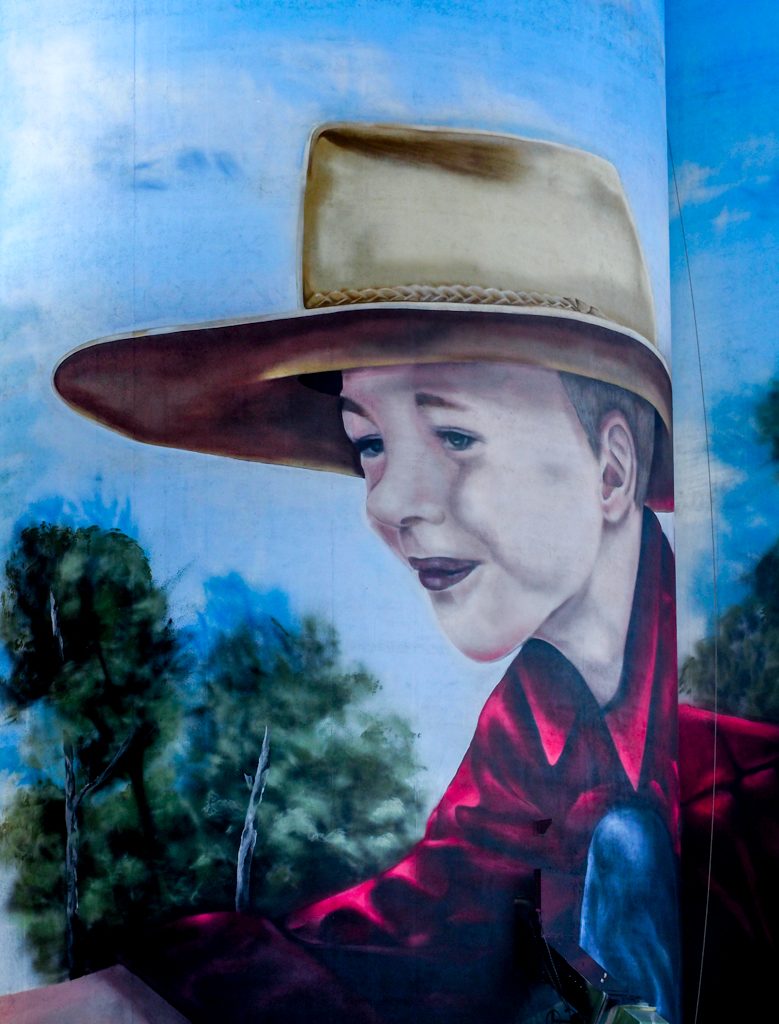 Tomorrow is Saturday and I am heading off on a two day trip to Theodore from where I will visit Isla Gorge National Park, a park I have wanted to visit for a while but on that never quite fitted into our various journeys.  So no blogs for a couple of days and only one silo on the way at Wandoan.

2 Responses to St George to Yelarbon