I have included an map of my travels so far.  The map shows the zig zag journey necessary to pick up the art sites, 2400 Km and not even in Qld yet. 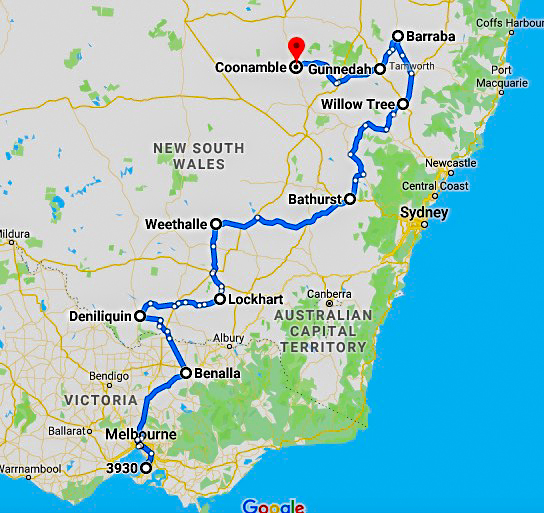 On Monday I stopped at Gunnedah where the old water tower is now a museum.  The artwork commemorates the Australian Army battle at Long Tan in Vietnam.  Two thousand  Viet Cong attacked 108 young and mostly inexperienced Australian and New Zealand soldiers on patrol on a shattered rubber plantation, Long Tan.  For 3-1/2 hours they held off the attackers until support arrived. The Battle of Long Tan is one of the most savage and decisive engagements in ANZAC history, earning many individual gallantry awards. 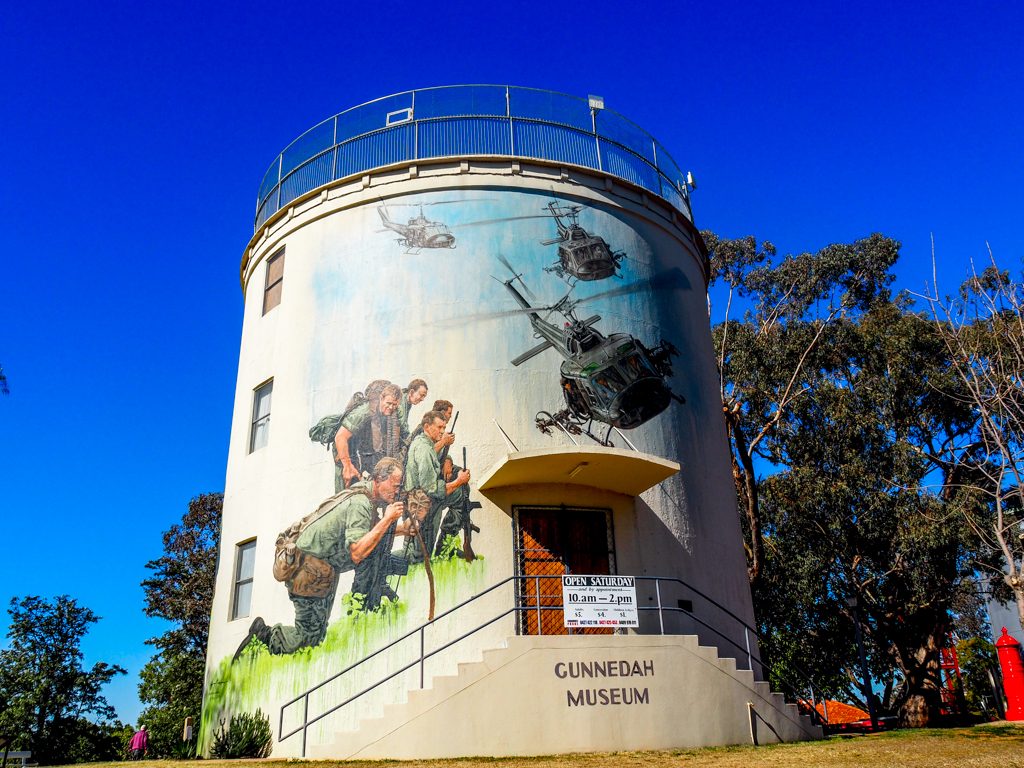 A couple of close ups of vignettes on the tower: 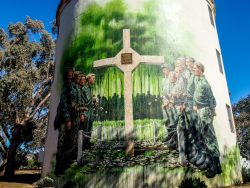 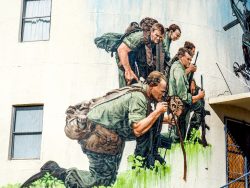 I stayed at the Top caravan park, the only one in town which was a very nice park but one of the toilets was so small you had to stand beside the pan to open the door to get out!  Another early start, on the road at 7.30 which gets me to the destination by around 1.00 leaving the afternoon for whatever I want to do.  I have averaged 300 Km per day on the days I have travelled which is comfortable for me.  I could do more as I arrive on site not tired, but I enjoy an early finish to the days travel.

Today, Tuesday, I was heading for Coonamble via Gulargambone.  The country I have travelled in NSW is barren except for the gum trees, very dry and most farms are empty of stock and the dams are nearly dry.  For example, Tamworth is down to 22% capacity in their water supply dam.  There has been so little rain that some crops are hardly out of the ground and some are browning off already and will deliver no grain.  But in some areas crops are doing quite well, so they must have had some good rain but in a narrow area.  Mudgee was sad to see, usually green with nice gardens and parks, everything is brown, there is no green grass anywhere and bushes in the gardens are dead.  Only the trees are green, which is typical in most of the towns I travel through.  You really feel for people living in these areas who are trying to make a living.

The Gulargambone water tower is a relatively new tower and was painted by Jenny McCracken and she named her Kingfisher artwork “Lucky Dip”.  The detail in the artwork is excellent showing a kingfisher diving under the water to catch a fish. 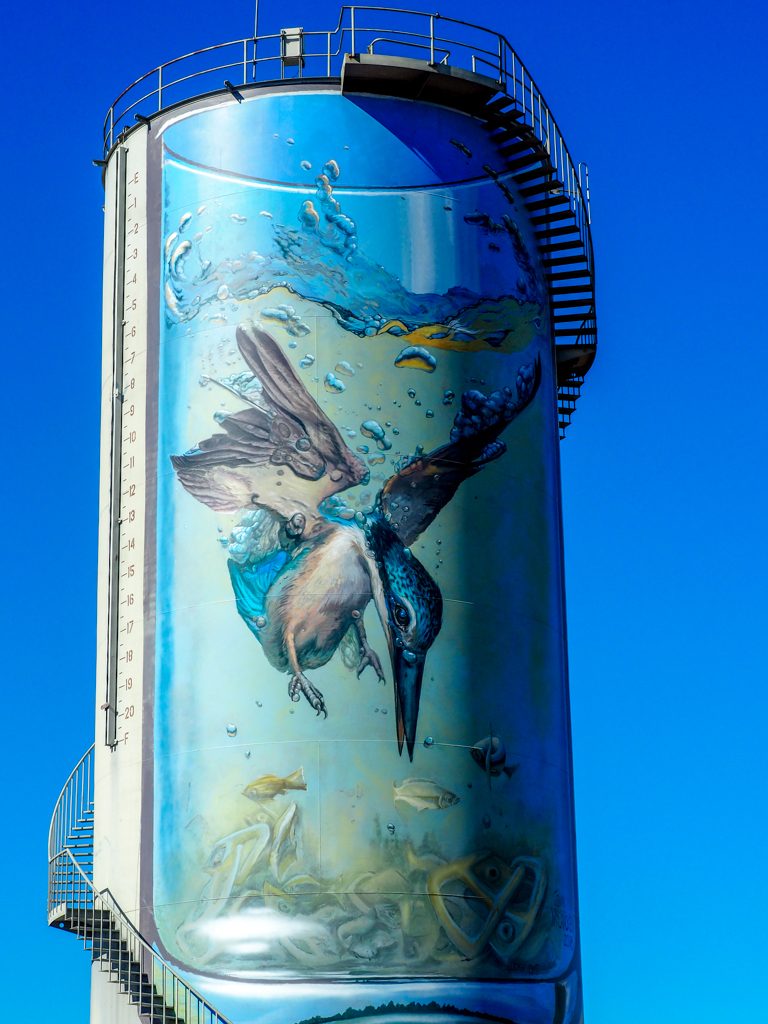 A closeup of the kingfisher: 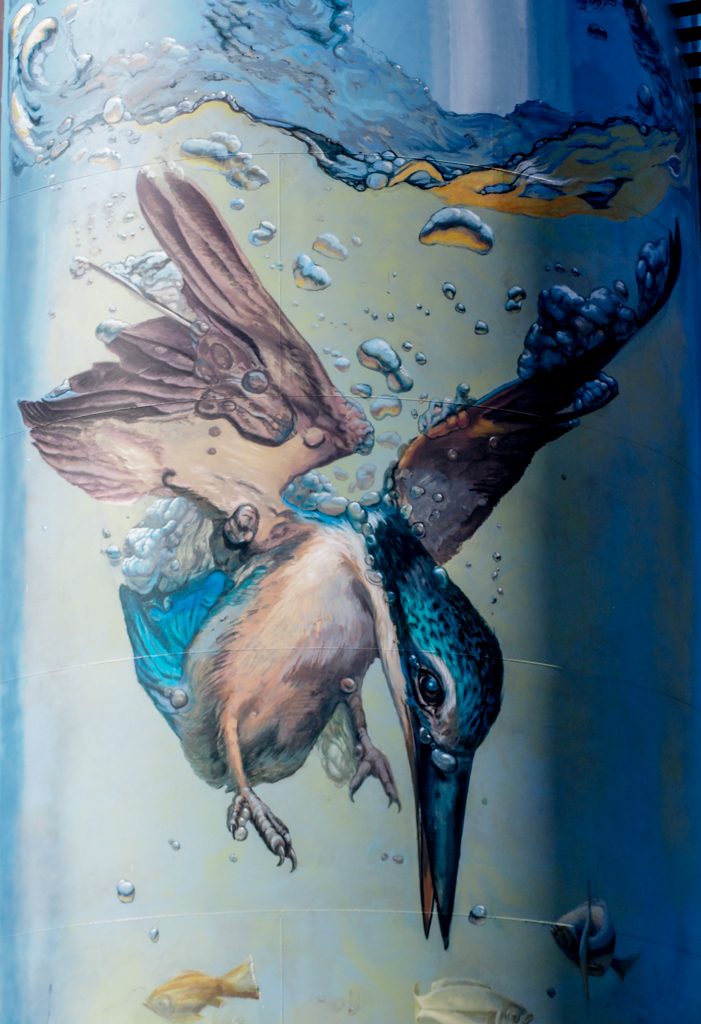 On the approach to Gulargambone there is a series of Cocky artworks and some more in the town. 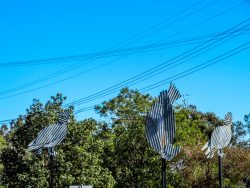 After Gulargambone it was on to Coonamble where I will spend the night.  Coonamble is near the Pilliga scrub and Timmallallie National Park where I camped in 2017.  The sculptures in the park are wonderful.  The tower in Coonamble is decommissioned and the artist who painted it is John Murray from Lightning Ridge, it is the first mural he has painted.  John included galahs, which he thought represent community, plus fence posts to signify the rural aspect of Coonamble, and the sun, moon and Southern Cross.  The tower art is very well done and impressive. 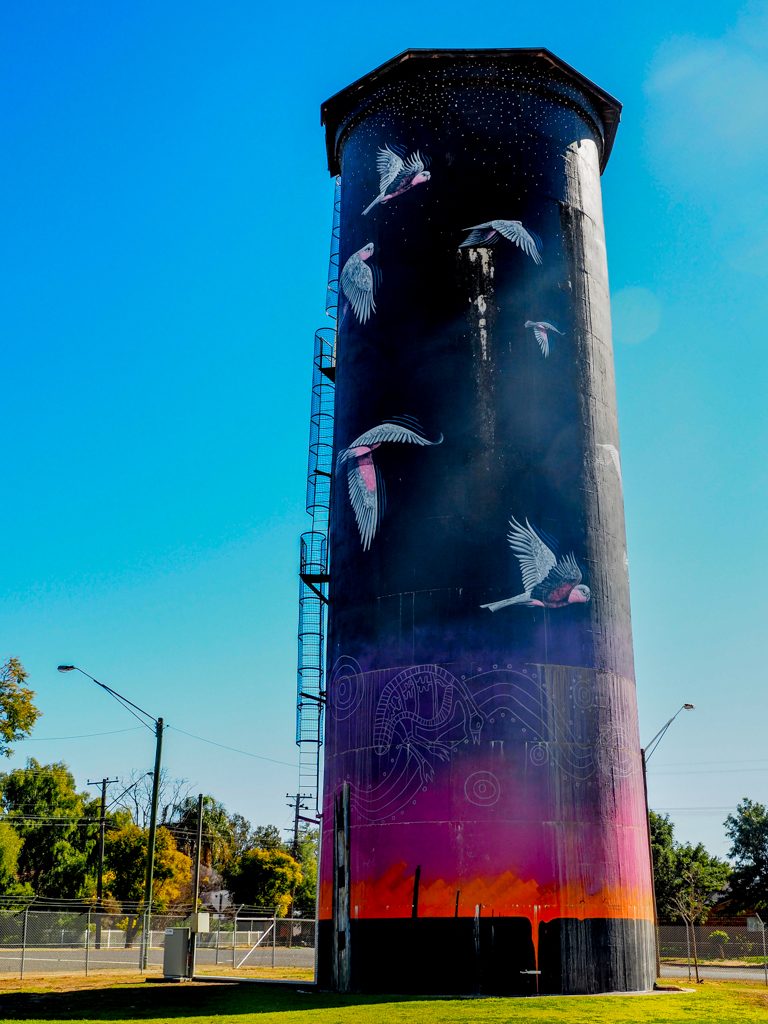 Galahs are pictured right around the tower and here are a couple of close ups: 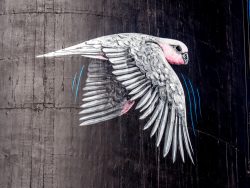 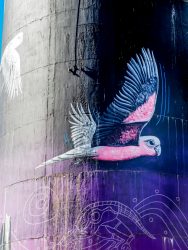 Another couple of views of the tower: 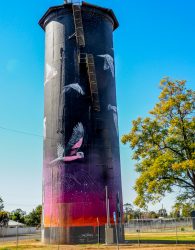 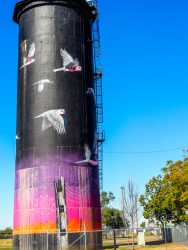