Not  far from the camp there was a rock overhang known as Bigfoot for obvious reasons.  It is a bit hard to see but there is another Staghorn on the top centre of the rock, it is amazing they survive in such harsh positions. 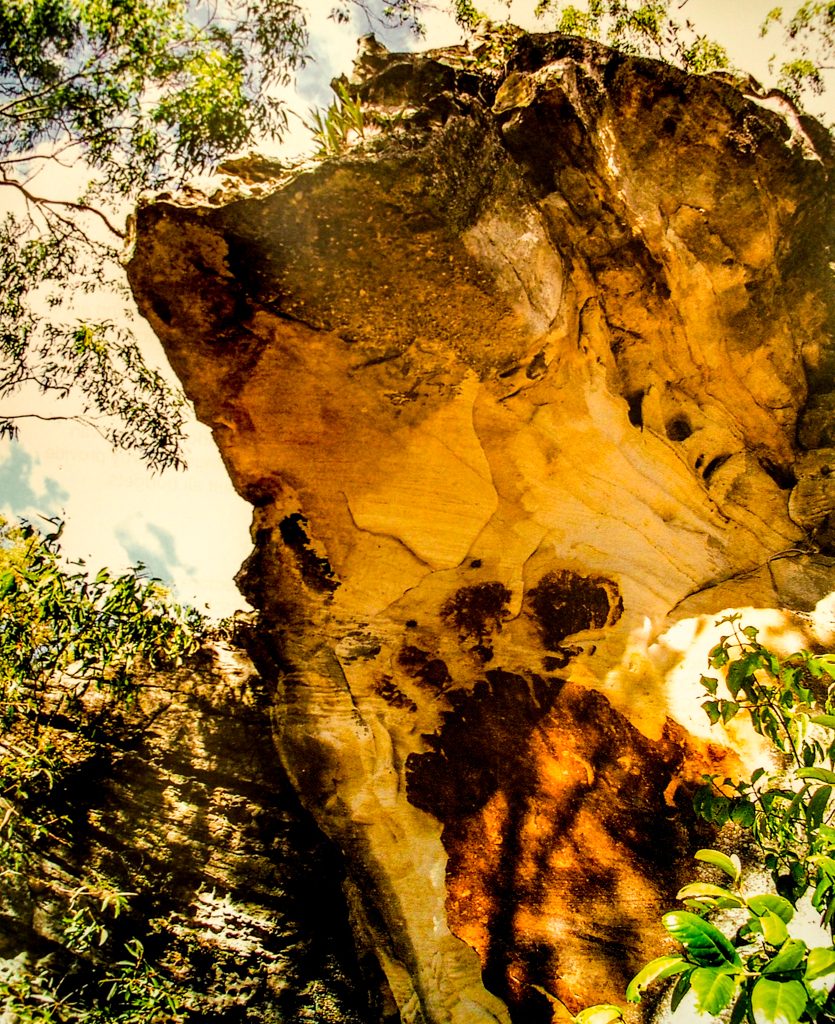 I took a short walk (1.3 Km) to Two Storey Cave, no idea how it got the name because you would have to crawl to get to the end of it.  However the walk was enjoyable up the escarpment then across to the cave and down again.  It was a sunny day, but there were clouds and dappled shade to keep me cool.  Along the way you passed massive boulders and walked between two on the track that formed a tall cave. 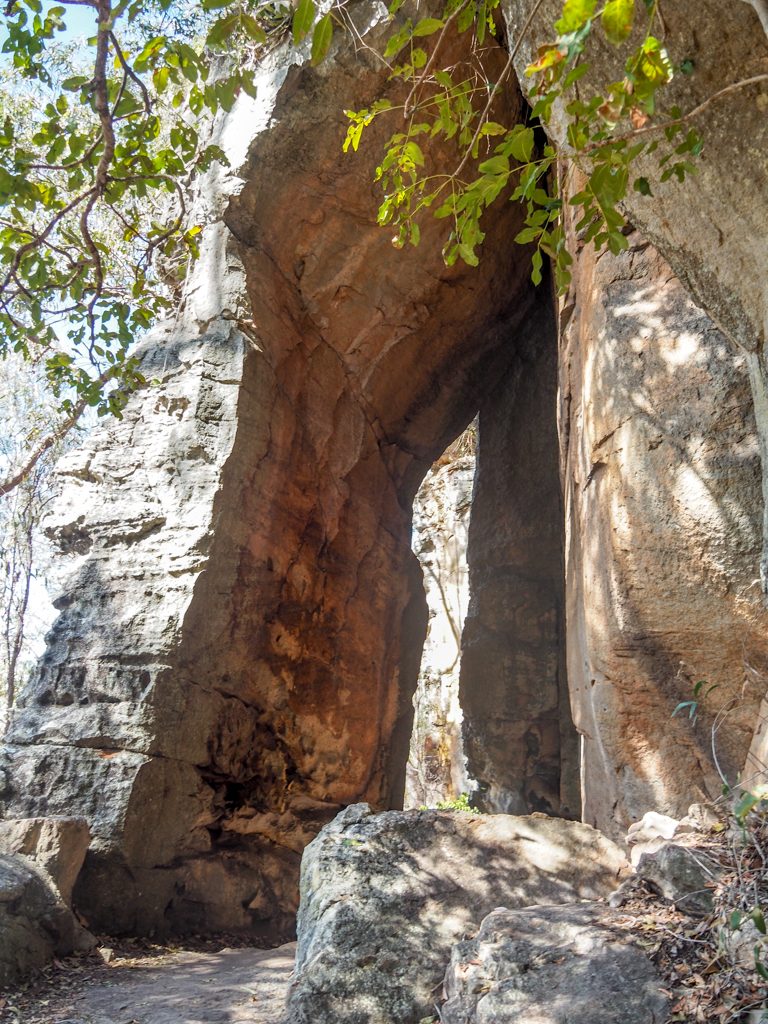 I then got to Two Storey Cave which was about a 1/2 storey. 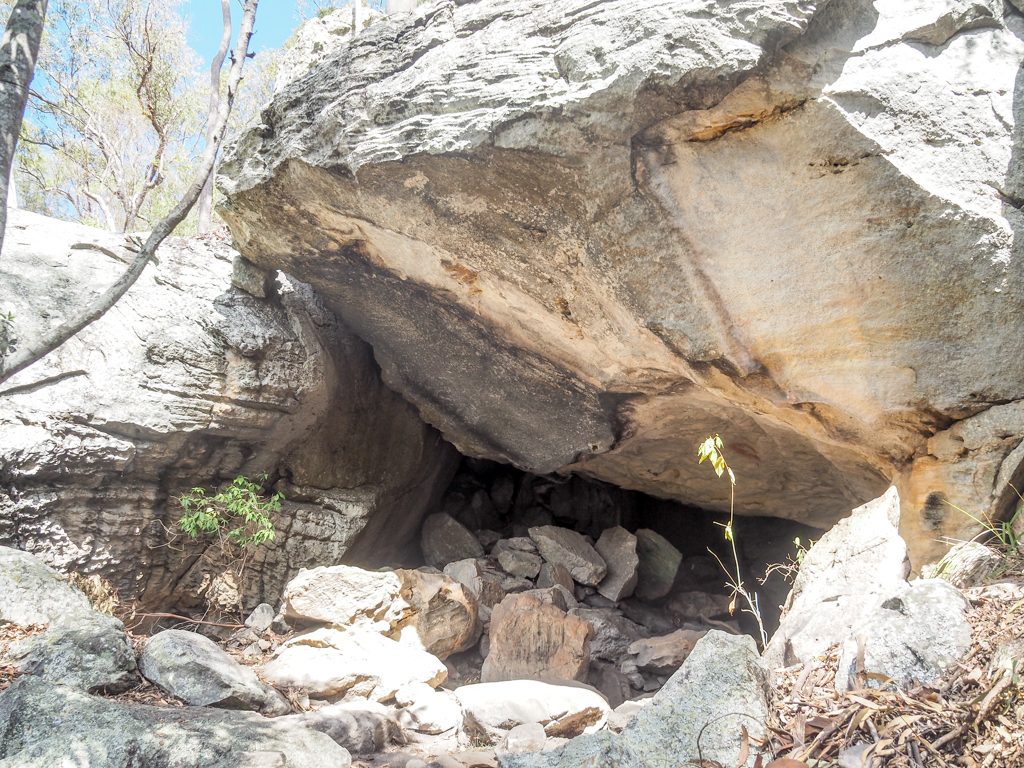 After that it was downhill return, but I got a bit of a shock when I came across a Lesser Grey Tree Python. 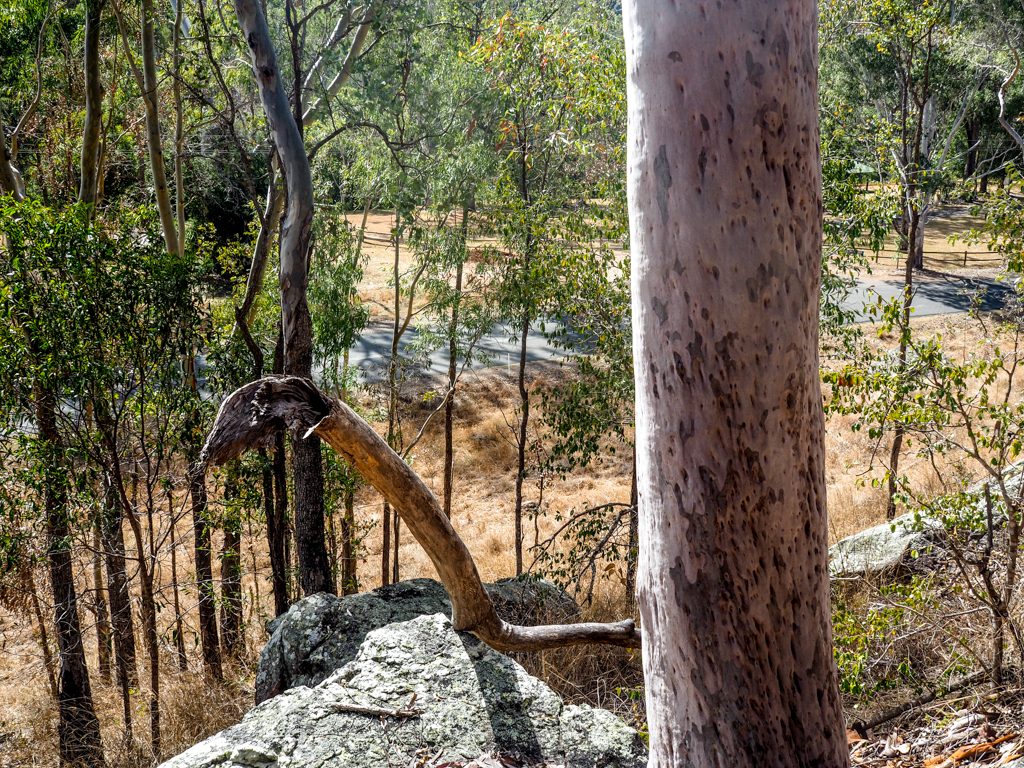 After the walk I drove into Monto for some shopping and lunch, but the restaurant I wanted to go to was closed so I had a counter lunch instead, which was very good.

Tonight I got the OzPig out and lit a fire, the first campfire I have had alone since Margie died.  It was an emotional time bringing back lots of memories, but what was amazing was that there was a full moon and puffy white clouds in the sky.  The night I first met Marg and when our relationship started was exactly a night like this and at that time I said how beautiful the sky looked.  Until I said that Margie had been non-committal because she fancied someone else, but she later told me that she then thought that this guy could be sensitive and alright.  When we got to the coffee lounge we were holding hands and the relationship was sealed, Marg was 15 and I was 18.

On my last day at Cania Gorge, Friday, I walked along the gorge to a dripping rock and a rock overhang.  It was a rough and rocky walk, maybe that’s a book opening in there, like “it was dark and stormy night”!  But it was and up and down 346 rough rock steps, I counted them on the return walk which was 3.2 Km return.  I was lucky along the way to see a Southern Boobook Owl about 6 metres up a tree.  It was hard to get a photo with the bright sky in the background but here he/she is: 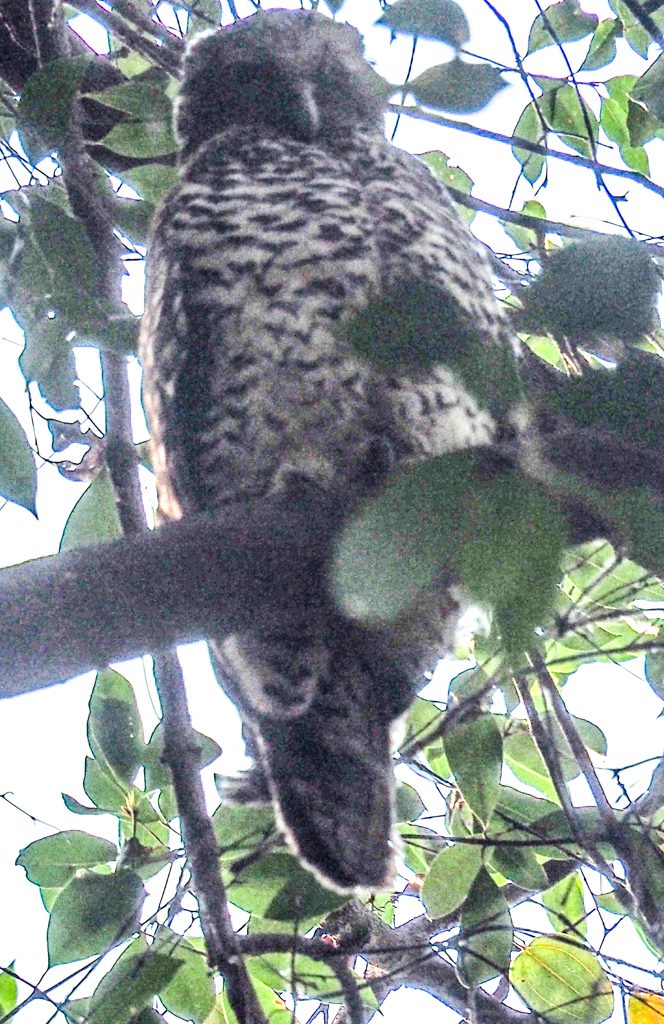 Or as it looked from the ground using ten times zoom. 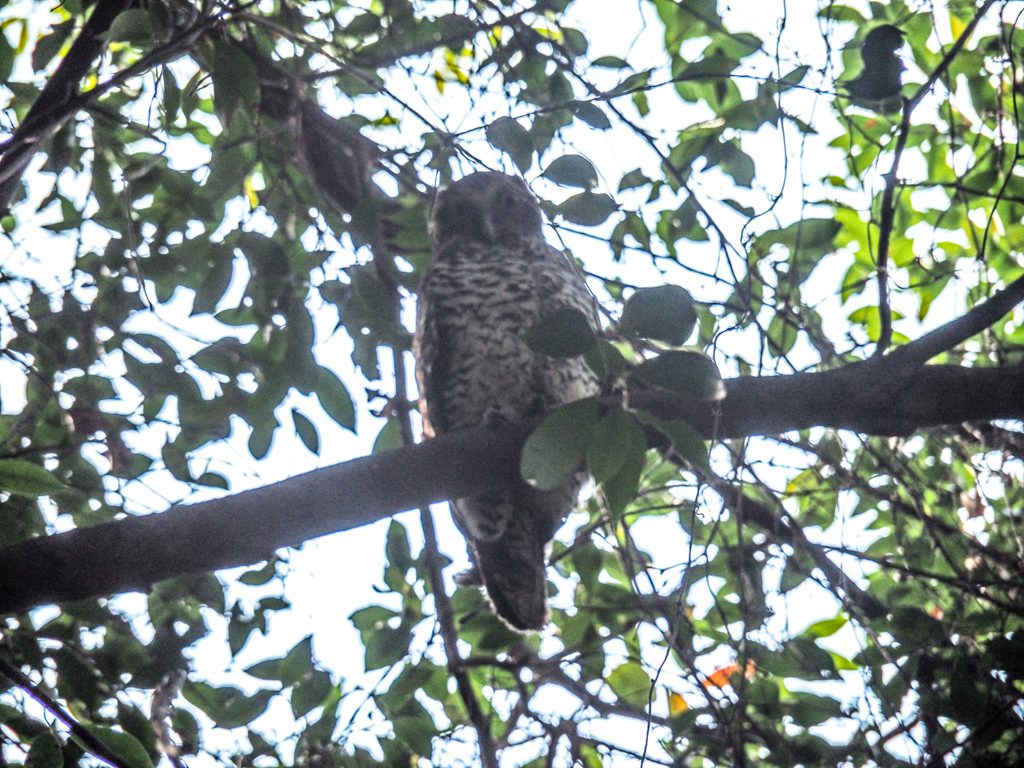 The walk travelled along one side of the gorge through a dry rainforest, may sound like an oxymoron but that is what it is called, and at times you see the sandstone cliff from the path through the trees.

Surprisingly the dripping rock was still dripping even after a prolonged dry spell, but the drips were about one every second from 3 or 4 different spots.  If you look carefully at the photo you can see them. 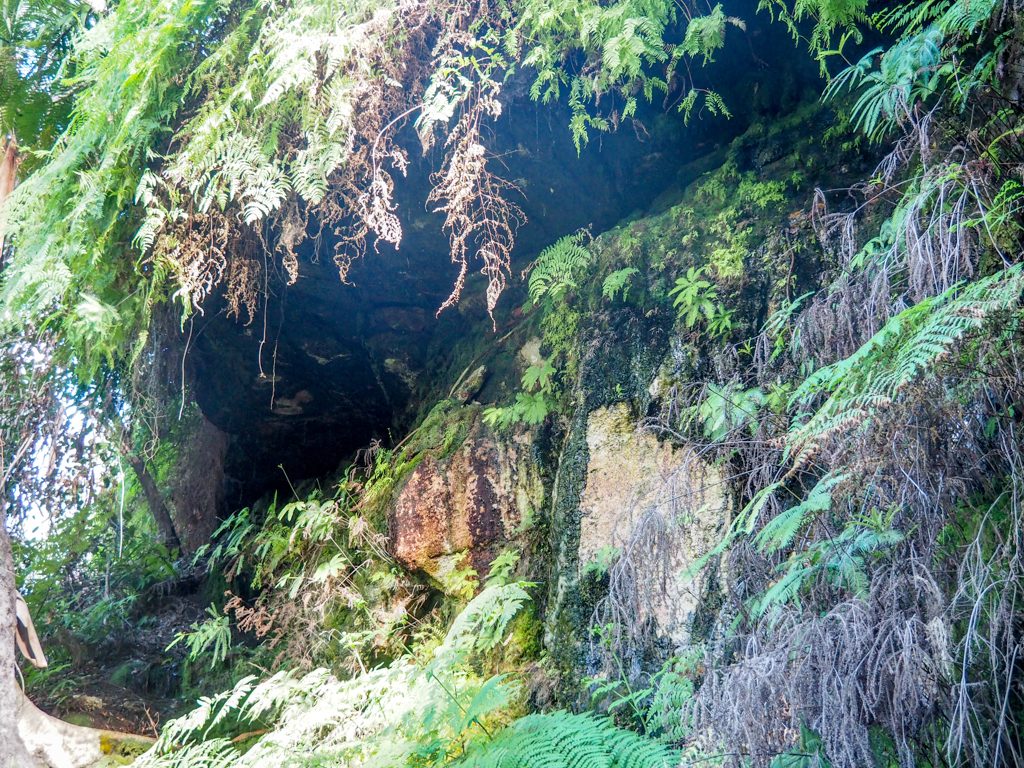 Only joking!  After that you walk another 600 metres to get to a big rock overhang at the start of a short valley.  A very peaceful, quiet spot with a few ferns and noticeably cooler than along the walk.

All in all it was a delightful walk with dappled shade most of the way.

My stay at Cania Gorge was a good one, but tomorrow, Saturday, I move on the Biggenden and then to a stop near Noosa.