After sorting out some health issues, at last I am travelling again after a long break. This trip I have my daughter Nadine with me for the first 2 weeks and we are heading through Victoria to see the Silo Art sites in the Wimmera. After that we will be going to Wyperfeld National Park for a few days and then onto the Flinders Ranges for a week or so. We will then split up with Nadine returning to Melbourne via Victor Harbour visiting a friend and maybe Kangaroo Island on the way. I will head up the Oodnadatta Track to Central Australia.

Our first night was in Rapanyup at the Lions Memorial Park where $10 gets you a power site, hot shower, toilets and a free BBQ with picnic tables, excellent value. We visited the silo site here to see the artwork. 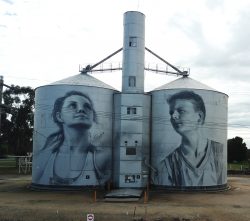 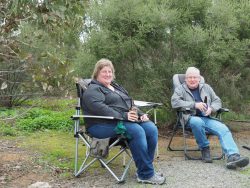 The silo art trail is spread out over 200 Km and exists in 5 towns in the Wimmera – Rapanyup, Sheep Hills, Brim, Rosebery, Lascelles, and Patchewollock.  They are in easy driving distance of each other and could be all viewed on the one day.

The two paintings in Rapanyup are the work of a Russian mural artist Julia Volchkova and depict a local netballer and Aussie rules player emphasising the importance of sport and community to a small country town.

The next silo is in Sheep Hills, a one house town with an empty pub. The art on the silo here depicts two local aboriginal elders and two children and was painted by a Melbourne artist Adnate who has painted other large scale murals in Australia and overseas. 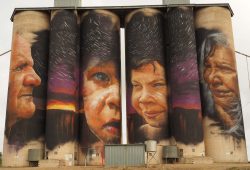 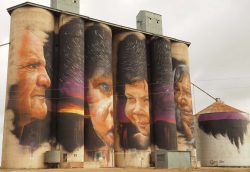 The next silos were at Brim and are the first silos painted in Victoria.  It is a small town and like Rapanyup has a council run caravan park.  Here the silos are of four farmers representing the difficulties the local community face with economic pressures and the effects of climate change.  They were painted by Guido van Helten who was born in Canberra and a driver in the development of the large scale art movement. 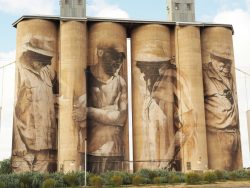 The next silos are located at Rosebery another small town where the silos were painted by a Melbourne artist Kaff-eine, clearly an adopted name.  They depict a local sheep farmer portraying the grit and determination that farmers need to survive droughts and other difficulties.  The other silo shows the close connection between a farmer and his horse. 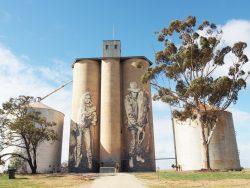 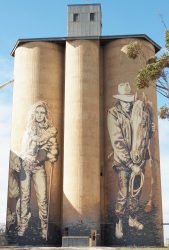 From Rosebery we travelled to Wyperfeld national Park, which is near Hopetoun a medium small town to the south of the park.  Wyperfeld is covered with Mallee scrub with other trees in places and lots of small shrubs growing in mostly sandy soil.  It would be a picture in spring with trees and shrubs and small native plants in flower.  The camping area is very large with fire rings and picnic tables scattered through the area plus a number of composting toilets, which were new and not smelly.  The wind has been horrendous so I have not been able to use the drone except on the last day at Wyperfeld so I took photos of our camp and the campground. 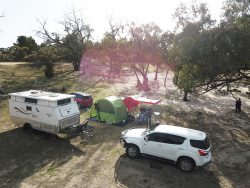 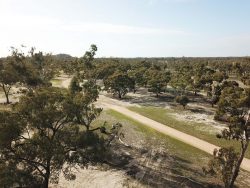 The sky at night was stunning with myriads of stars and on the first night we were able to see 6 planets, picked out with the aid of an app, Sky Guide.  It is an excellent app, you point your iphone to the area of interest and it gives the names of the major objects and you can tap an object and it will give more info.  It also shows the stars and planets below the horizon so you know when and where they will rise.  The planets we saw were Mars, Venus, Jupiter, Saturn, Neptune, and the moon (we took a liberty counting the moon, but it is round and it does orbit!).  We also enjoyed some beautiful sunsets.

Nadine had a sore achilles tendon so we couldn’t do most of the walks as they were 6 Km or more, but we did a 1.5 Km walk to a Mallee Fowl mound.  The male Mallee Fowl builds the mound and adds and removes material to maintain a constant temperature during hot days and cold nights.  The female bird lays up to 30 eggs.  The bush surrounding the mound is typical of the park.  We spotted one flower on the walk, my blog would not be complete without a flower photo. 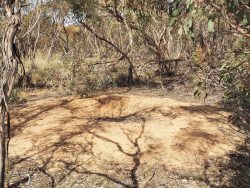 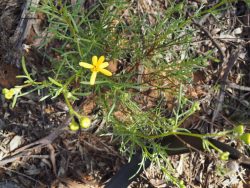 From Wyperfeld we drove to Patchewollock to the east of the park via Dattuck track.  This track carried a warning of deep sand and they weren’t joking, probably the hardest sand driving I have done, and I have done a fair bit.  The deep sand was OK but their were deep short dips in the deep sand usually on the approach side of the dune so you couldn’t slow down or you would be bogged.  The car bounced violently over these but we managed to keep going, several times only just, so there was a lot of breath holding.  Most times just the front wheels became air born but on one all wheels were off the ground.  Exciting stuff, needless to say we didn’t stop for photos.

Patchewollock is a small town with the only businesses being a community store and an hotel.  There seems to be a strong community spirit, typical of these small towns battling for survival.  The silos here were painted by Brisbane artist Finten Magee and depicts Nick “Noodle” Hulland whom the artist befriended while getting to know the area.  Hulland typifies the no-nonsense hard-working attitude that is needed to survive in this area.  The photos look like I took them from the side but they are straight on, the artist painted them with the farmer looking to the side. 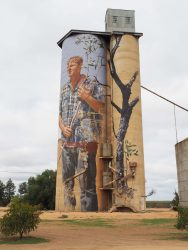 We then travelled to Lascelles, a one pub town, no shops.  There is a small community run caravan park here and a well set up picnic area and a spotless free gas BBQ.  The silo was painted by Melbourne artist Rone who watered down his paint and used a muted monochrome pallette to match the raw concrete colours.  The painting is of farmer Geoff Horman, a fourth generation local. 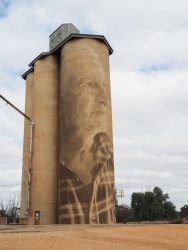 We returned to Wyperfeld via Hopetoun and started to pack for our trip to the Flinders.