As I mentioned in my Kings Canyon blog the McDonnell Ranges were pushed up 300 – 350 million years age in a massive upheaval. So much so that at that time the west McDonnells were the height of the Himalaya’s at 10,000 metres, which is quite amazing given that the highest mountain, Mt Zeil is just 1,531 metres.. The upheaval was so violent that the rocks were all cracked and that allowed crevices for water to erode them over the millennium to there current height of a hundreds of feet. That some of the rock layers now stand vertically is testimony to the violence of the upheaval. It is interesting that rocks in the creek beds of most gorges is quartz, very different to the rocks of the gorge walls.

Ormiston Gorge was my first stop, one of the most popular in the West McDonnells, and rightly so. It was formed in the giant upheaval when hard rock layers were forced into a giant U shape, which was filled with soft stone, Dolomite. This soft rock was eroded leaving the gorge. The road in is bitumen and the path to the gorge a 5-minute stroll on a paved path. The climb to the lookout is a bit rougher but there are lots of concrete steps that make it easier to ascend. The view at the top is worth the climb. 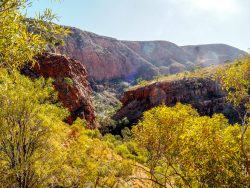 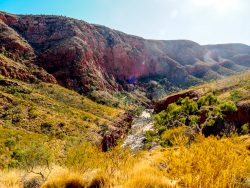 The view out of the gorge of the Finke river that flows from the gorge is good as well. 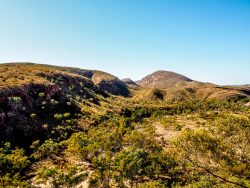 The pool, trees and rocks makes the gorge, it is a beautiful spot. 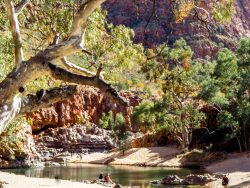 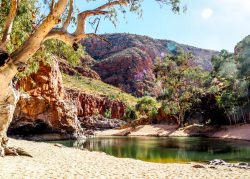 Then on to Ellery Creek Big Hole; an average name for a really beautiful spot. It has a dirt doad in but easy travelling, there is a good campground with flushing toilets and gas BBQs. Only a couple of sites would suit caravans. 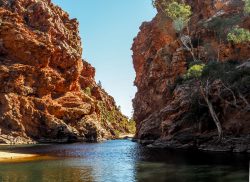 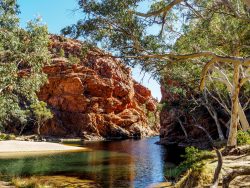 On the way out a look back needed another photo. 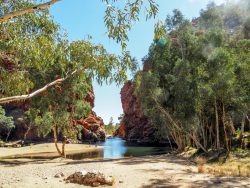 At the waterhole there was one of Marg and my favourite birds, a Cuckoo Shrike Thrush, a beautiful grey bird with an absolutely wonderful song. 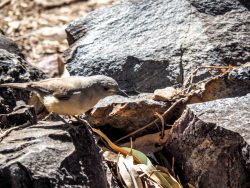 Now it was off to Serpentine Gorge is one of the less visited gorges so the road in was dirt, and the track a bit rough. It was about a 1 Km walk to the gorge. Another feast for the eyes. 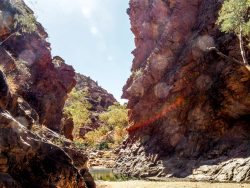 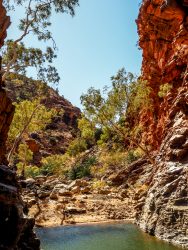 Near Serpentine Gorge on a separate 4WD access road is the few remains of a lodge established by Ansett in 1958/59 in an attempt to attract tourists. They used to bring people in using converted Blitz Wagons from the second world war, it was a rough trip. They also had issues with water supply and had to truck it 20 Km from Ellery Big Hole. Ormiston and Glen Helen Gorges were developed and proved much more popular. It was folded in 1968 at the end of a 10 year drought, and was dismantled and donated the Lutheran Mission in Alice Springs, and the buildings still exist. 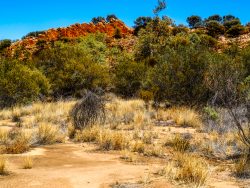 The Ochre Cliffs was my last visit for today, a large ochre deposit that has been used by aborigines for thousands of years and is still in use today. The cliffs are 10 metres high and run for quite a length. Ochre has been used for decoration since prehistoric times around the world.

The predominant ochre here is yellow, a mixture of white clay and iron oxide (rust), red-brown ochre is the same clay with Haematite, a different oxidised iron. The white ochre has no iron and is just white clay. Tiny fragments of mica and quartz give ochre its sparkle. 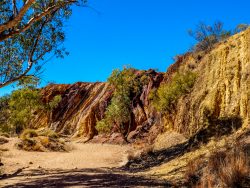 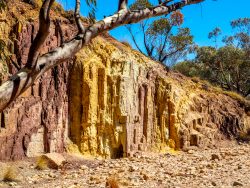 Today Monday 20th I went to the gorge at Glen Helen and Mt Sonder. The Finke runs through Glen Helen Gorge and is the oldest river in the world, as parts of it run in the same course as it did some 300 million years ago. It is the river that flows (seldom) for 700 Km through Glen Helen Gorge and eventually to the edges of the Simpson Desert; there it spreads out to at least 1 Km wide from memory. We crossed it when we went to the edge of the Simpson on our last trip to Alice Springs. I cannot put the drone up to photograph the river as it is within 5 Km of Glen Helen, a no fly zone.  The Finke starts at Ormiston Gorge and at Glen 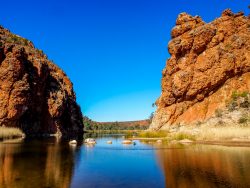 Helen gorge was a shallow surface river at the level of the top of the cliffs at the gorge. About 15 million years ago the land surface tilted to the south and this gave the river more power to erode the cliffs and gorge to what it is today. There are 9 species of fish in the river, all native, and permanent waterholes like at Glen Helen they survive long periods of dry and when the floods come they repopulate the rest of the river again.

The aborigines call the river Lhere Pirnte, which is pronounced Lara Pinta, hence the Larapinta 12 day, 223 Km walking trail that starts in Alice Springs and ends at Redbank Gorge. My friend Eric walked the trail not long after it first opened in 1990. At that time it was half as long as it is now, the trail as it is now was opened in 2002.  There was a Heron fishing while I was at the gorge. 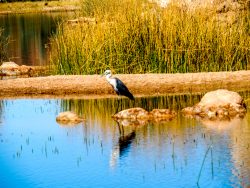 Then it was off to a lookout to view Mt Sonder at 1,380 metres the second highest mountain in the McDonnells.  I had to take the panorama with a hand held camera as there were bushes at tripod height, it turned out OK after a couple of tries.

From the lookout you see the Finke river and a free campsite, the 2 Mile, a great spot but no facilities.  You also look down the length of the McDonnell ranges. 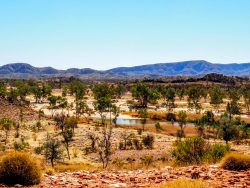 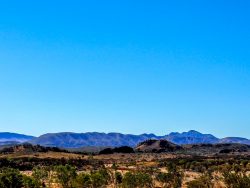 You can only get part of the view into the photo.  Tomorrow off to Alice Springs for 3 days.