Off in the early morning (Thurs 17th) to complete the Kings Creek Walk, which traverses 1 Km along the valley of the canyon. It was a delightful walk in the cool morning, 17 °C, with lots of attractive healthy trees and shrubs. The walk is fairly flat with a few easy rock scrambles. 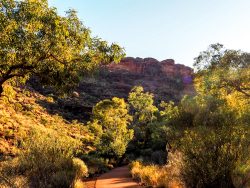 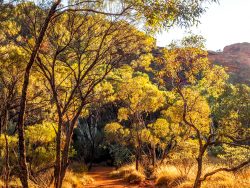 Unfortunately a couple of massive boulders wiped out the viewing platform 2 years ago so the last 50 metres are closed so you cannot see the waterhole at the base of the waterfall. I think National Parks and the traditional owners have taken the opportunity to close it off as it was a sacred place to the aborigines. But you can see the rock wall next to the waterfall from the end of the path. This is the same rock wall that was in my last blog, it looks much smaller from down here.

The right hand photo is looking up at the rim walk and you can just see a small bridge on the central left of the photo that leads to a lookout on the rim walk. 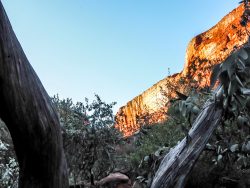 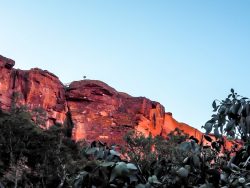 On the way out I noticed a Grevillea just starting to flower, it has very prickly leaves and usually grows in more rocky areas, but there were plenty in the creek, but only one in flower. 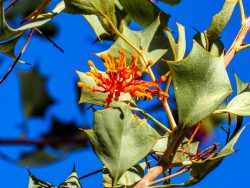 So it is pack up today and head for Glen Helen Gorge Lodge for 3 nights. I bought the pass for Mereenie Loop Road as it passes through Aboriginal lands, only $5.50 for a day pass. A fellow camper found out that the road has just been graded which is great, apart from being very dusty. The road is usually very corrugated so I am travelling just at the right time.

Well I set off early on Saturday to go to Glen Helen Lodge in the West McDonnells via Mereenie Loop. This is a shortcut, you can travel via Alice Springs on the bitumen but that is roughly 200 extra Km. The road is notorious for corrugations but supposedly has just been graded. I think the grader driver forgot to put the blade down! The dust was very heavy and in places there was bulldust and sharp undulations that, if you took at speed, could be dangerous. So at camp it was another clean out the dust task. I may be over long drives on rough dusty roads.

On the way I passed a classic road sign. 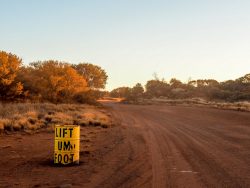 After that I passed Gosse Bluff, an ancient crater. The object from space landed 142.5 million years ago (wow) and scientists believe that it was a comet 600 metres across, a massive object. The force of impact is estimated at 1 million times the force of the atomic bomb dropped on Hiroshima. It left a crater about 20 Km across (wow again). The crater in the photo is now about 2 Km lower than the original and about 5 Km in diameter, worn down significantly by weathering. It is still an amazing geological feature.  I had the van in tow so I couldn’t travel in to see it as it is a rough 4WD track into the crater.

I then went on the Redbank Gorge which is the gorge furthesy West from Alice Springs in the West McDonnells. It was a 4WD track in, but they didn’t say no caravans so I went in and probably shouldn’t. The parking area was extremely tight and I managed to collect a rock while turning around, bugger, some damage to the van. Had to back up onto an open small clearing off the road to park, needed 4WD to get up the edge of the road. Then it was off to walk to the gorge, a very rough track with lots of rock scrambling, but the scenery was delightful. 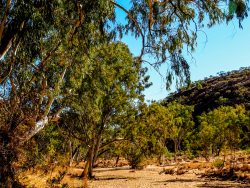 The gorge itself had a very narrow opening and was filled with water so I could only look, but it was worth the walk. 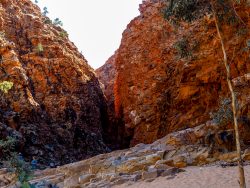 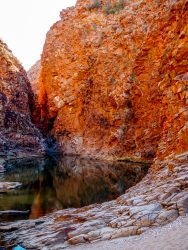 From here it was on the Glen Helen, it describes itself as a Lodge or Resort. More like basic bush camping. Small sites, no rubbish collection, basic very old toilets, (I think they bought them from a 3rd world country after they had been rejected), power and water far from your site, I could go on, but I definitely wouldn’t recommend it, and it’s more expensive than the excellent Kings Canyon Campground. Plus they are hosting 170 runners over the next 2 days and nobody was warned about that before we passed over our money. Not good.

Tomorrow (Sunday 19th) I will visit a number of gorges in the West McDonnells, I’m looking forward to that.