In last post I was wrong in the sunset photos about the bluff you climb to do the rim walk. It is not the one in the sunset photo, it seems as steep but it isn’t. Also the gorge in the photo is not Kings Canyon, how wrong can you get!

On Thursday (16th) I completed the 6 Km Rim Walk around Kings Canyon, it is a rugged walk with lots of steps and rock scrambles and a steep climb up a bluff at the start. In the photo below (from Google maps) you can see the bluff that you climb where two gorges meet. Kings Creek Walk heads up the valley and the rim walk up the bluff. The rim walk then follows the rim to the Garden of Eden on the right of the photo. It then turns and comes back down the south side of the canyon, the descent is not nearly as steep as the ascent. 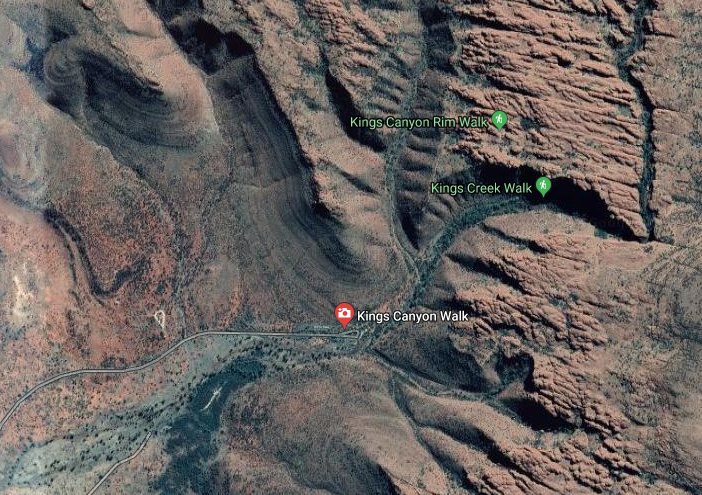 The walk is a fantastic experience with changing scenery, wonderful rock formations, beautiful trees and the ever-present gorge. On the steps you just keep looking ahead, one foot after the other. 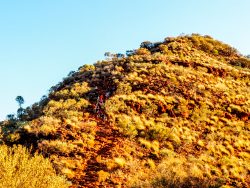 Once the steps are behind you the walk is not too strenuous and the view out as you climb the steps is wonderful. 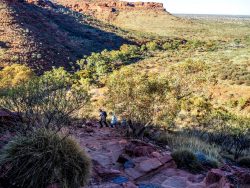 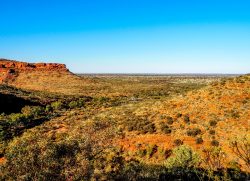 As you walk around the rim there are many photo opportunities. 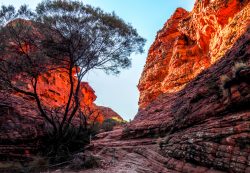 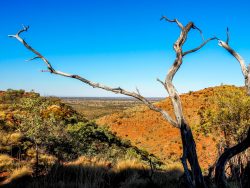 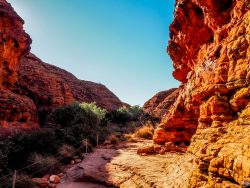 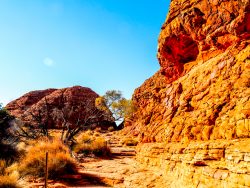 The geology of the area is interesting, it was a sea 450 million years ago and 400 million years ago the sea receded and the sand was hardened over the years and silica washed through the layers setting them as rock. 350 million years ago there was a massive upheaval, which pushed up the McDonnell ranges near Alice Springs and the George Gill ranges. Over the eons erosion has created the rugged rock sculptures and gorges we see today.

Kings Canyon started as a crack that deepened and widened as water wore the rocks away. All the shapes you see in the photos were created the same way. In lots of places on the walk you can see ripples in the rock, evidence of it being an old seabed. 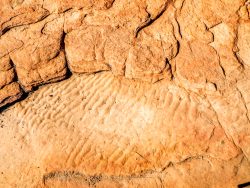 Near halfway on the walk you cross the Garden of Eden so called because it is a green oasis in a very dry landscape. The walk takes you down stairs, across a bridge over the valley and then up stairs again. It is a beautiful spot. 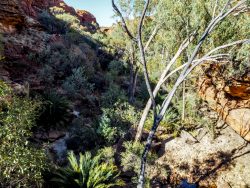 The cycads are survivors from when Antarctica and Australia were one land mass and much cooler and wetter. The cycads died out over most of Australia but pockets survived in cooler wetter places such as here. Some of the cycads are 400 years old. On the other side of the valley a Japanese lady and I took each others photo, Kyla will note something missing in my photo! 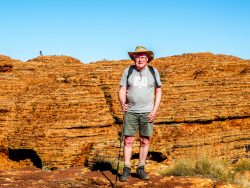 In the right photo below you can see a flat rock wall on the south side of the canyon, right next to that is a dry waterfall which, during rain, feeds Kings Creek far below. The photo on the left was taken when I was on the south side and shows the same rock face and gives an idea of how massive the canyon is. the waterfall is fed from the garden of Eden. 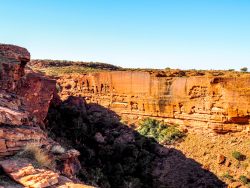 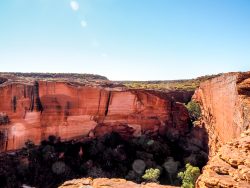 The visitors shelter had a photo of the waterfall flowing so I took a photo of that, the quality is average but you can see that a lot of water can flow. The right-hand picture is of the path leading down on the south side of the canyon. The plains in the photo are the Amadeus Plains, sand plains that go as far as Uluru and contain dry Lake Amadeus. 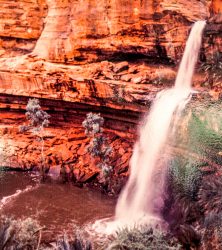 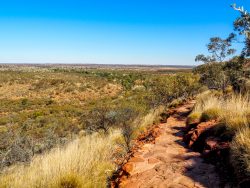 A totally wonderful walk that will be remembered for a long time. I was ready for another stunning sunset display bit it was totally an anti-climax. None of the wonderful reds that were present the day before.