I said goodbye to Nadine this morning (9/8). It was a sad farewell, we both welled up, we have had such a good time together. Now I miss Marg even more because Deen bought back memories of the times Marg and I spent camping together, great times and sadly only great memories.

On the way to Coward Springs on the Oodnadatta Track I went through Parachilna gorge which becomes a real gorge after about 15 Km. Beautiful scenery with high mountains, ancient red gums and rugged rock faces. The road was quite rough so it was good we didn’t take Deen’s mini all the way through it. 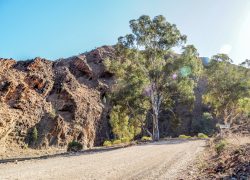 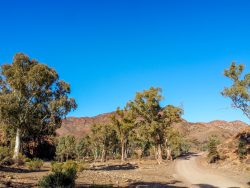 On to Leigh Creek for supplies and a big disappointment, the Bakery in Copley 5 Km away had closed permanently. I was hanging out for a pie for lunch, they made fantastic pastries. Anyway at Lyndhurst the roadhouse sold home made steak and mushroom pies, and it was excellent. Just before Maree I passed Lake Eyre South. I have been here 3 times before and never seen it empty, the first time was in the early 1980s, but it was empty this time, which is its normal state. It is 12 m below sea level and cores a massive area of around 5000 sq Kms. I put the drone up in the wind, but even then it was hard to capture the size. 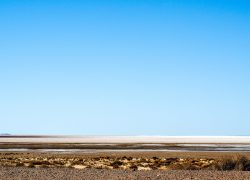 I was going to stop at Marree, but it was early so I pushed on to Coward Springs. This used to be a station on the old Ghan line and had a hotel, a station building, a station masters residence (4 rooms), and an engine drivers cabin (2 rooms). The quaint hierarchical distinction between residence and cabin is confirmed by the original drawings, too much for an engine driver to have a residence! Only the engine driver house remains and it is now a museum containing lots of info on the history of the springs and its development. 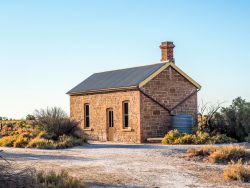 The spring is really a bore tapped into the great artesian basin (the basin is under 1/5th of Australia) and it has created wetlands some 1700 hectares in area, a massive wetland in such a dry area. There is open water, smaphire areas and reedbed areas. There are 99 different plant species and 126 different birds have been observed. The hotel closed in 1965 and this photo is of the hotel in 1915, I may be old, but no I didn’t take it! 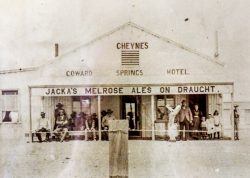 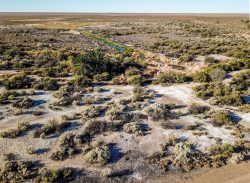 The campground is well set out and only $12.50 p.p. per night. There is no power, drop toilets and limited drinking water, but you can have fires. The camp-sites are tucked in among old sheoaks. They have also built a spa that is on top of the bore, which gives the spa effect 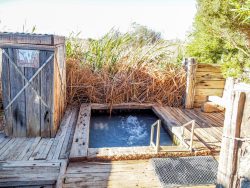 After tea I went for a short walk and saw my first desert sunset for quite a while, it was beautiful. 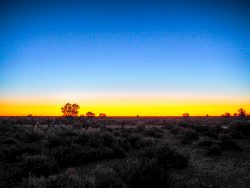 Off to Oodnadatta and Arkberinga Station near the Painted Desert.