While in The Alice I visited Olive Pink Botanic Gardens, a place Marg, Eric, Glenn, and I visited in 1990.  It is much more developed than then, but still a dry land landscape.  Marg and I and Eric each bought a seedling and I was keen to see how they had developed, they sold seedlings to raise money to run the gardens.  The gardens maintain a database that holds sponsor details, but it was not easy to access so I left them with a request to locate our plants.  Tomorrow I will see two of them, sadly one of ours has died, but the other and Eric’s are still going, so I am looking forward to seeing them.

At the gardens you can climb a hill at the back of the gardens and get a view to Heavitree Gap, the southern entry to Alice Springs and over the gardens. 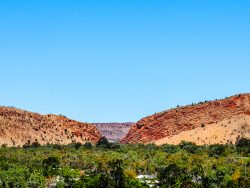 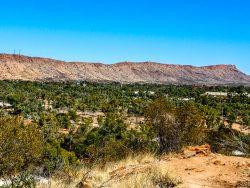 Olive Pink was an amazing woman who worked to get the gardens made a reserve and was also active in defending aboriginal rights, she also employed an aboriginal gardener and was the first employer to pay him and any aboriginal, pay equal to that of a European.  She lived in a tent in the gardens for 17 months from 1958 without water or electricity until a hut was built to house her.  I think it was her gutsiness and dedication that attracted us to support the gardens all those years ago.  It was quite a nostalgic visit. 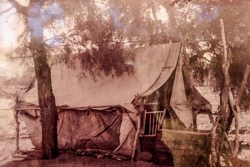 I also visited the old Telegraph Station, a collection of lovely old buildings and with a wonderful picnic area.  I got one photo before the camera battery went flat, not so enthusiastic to go back for a second visit though, old buildings are not my thing.  However it reminded me of Burke and Wills and the competition between Vic and SA to be the destination of the overland telegraph, B & W for Victoria and Stuart for SA.  Eventually SA won after Stuart successfully crossed Australia, while Burke and Wills died in their attempt. 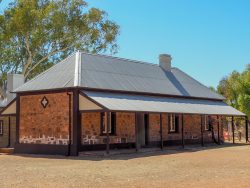 Today I went back to Olive Pink to see our trees feeling quite emotional recalling Margie and the trip we made with Eric so many years ago, in 1990.  Our tree is an Acacia Ammobia or Mt Connor Wattle, it is a spindly tree, but I am assured it is going well.  Eric’s is an Acacia Peuce, same as ours that died, it is an endangered tree that only grows in 3 small patches in Australia.  One is on the edge of the Simpson Desert near Molly Clark’s Old Andado Station, which we visited and camped at this site with Eric on our way to Alice Springs.  In the photo on the left our tree is the little one left of the bigger tree, between that tree and the shrub. 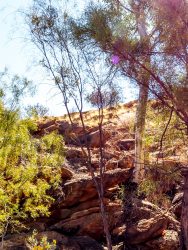 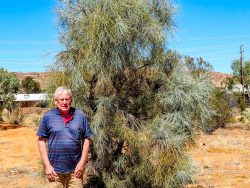 The photo with me in it is of Eric’s tree, he would be pleased at how well it is growing in a dry, salty and alkaline soil (PH 9).  I was going to subsidise another Acacia Peuce, but the cost is now $1,000, so I subscribed to a garden bed in Margies name.  The bed is one of Bushtucker plants, appropriate I think given Margs love of cooking.  Her name will appear on a plaque on that bed.

My second last day in The Alice and I headed west to John Flynn’s grave.  John ran the Australian Inland Mission for many years and started the Flying Doctor Service initially based in Cloncurry.  A South Australian, Alfred Traeger, developed the pedal radio that broke the tyranny of distance  in the outbackand facilitated the establishment of the Flying Doctor Service.  The pedal radio had a range of 500 Km, the pedals drove a small generator that powered the radio. 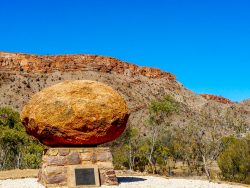 The mountain in the background is Mt Gillen, part of the West McDonnells.  After that it was off to Simpsons Gap, no one knows who Simpson was but now it is his gap.  It looks good as you approach by car and also as you walk towards it. 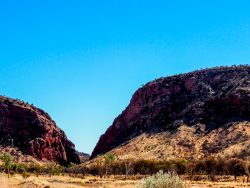 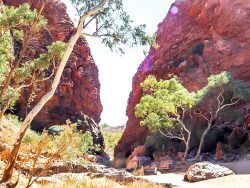 There was water in the pool at the Gap and the scene was so typical of the west McDonnells. 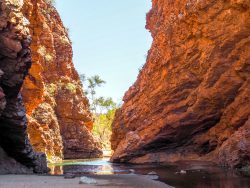 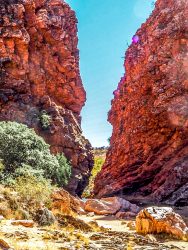 About 20 Black Footed Rock Wallabys live at Simpsons Gap and on the way out I was lucky to see a couple of them.  They have black tails and feet and a white flash on their cheeks.  They have textured foot pads that help them grip the rocks.  The wallaby in the left photo then moved and played Foo, as in “Foo has Struck”. 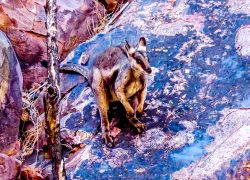 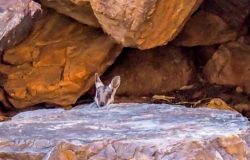 This wallaby is an adult at just under 0.5 metres, in the next photo you can just see a smaller wallaby at about 0.3 metres.  He/she is hiding behind some grass and a dead tree. 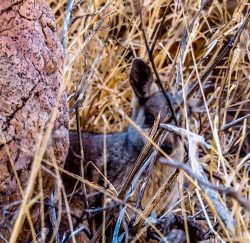 You walk out alongside the dry creek, a classic dry inland creek. 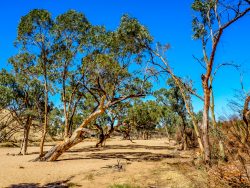 Tomorrow it will be pack-up day before I head out to the East McDonnells on Monday for 3 days.  I think it will be a 3G free zone.  Then I will head south to Quorn for a few days, but it will take 4 days to make that journey.