I had another enjoyable night around the campfire with the same delightful group plus another couple; Ron was a long time friend of Les’s who happened to be in the area so he called in with his partner. Les and Ron worked together in the RAAF so had a great interest in the drone, so on the morning I left I got the drone out and put it through its paces for Ron. Les, Ron, and I are closely studying the control unit in the photo. 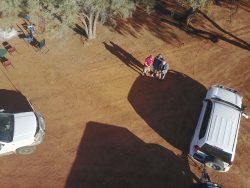 I forgot to mention that yesterday I was showing the group the return to home function and when I pushed to button, the drone went up to 30 metres and shot off away from me at a great rate, what a surprise. I had forgotten to reset the home point and it was heading for Alroy shearing shed 1/2 Km away, the last home point. Fortunately there is a cancel option, which I used, and bought it back myself.

I was sad to say goodbye to this group, who had welcomed me as if I was family, Barb even gave me the last of their port while we were around the fire, not sure Doug and Les agreed though, so she is a friend for life! So after a cuppa around the fire in the morning I was off to Currawinya National Park. I found a nice camping spot on the banks of the Paroo about 300 metres from the next camp, so plenty of privacy. There are cold bush showers and toilets, but the toilets are about 1 Km away, so no green apples. 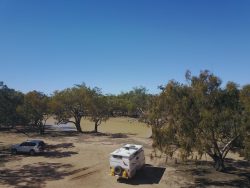 The former sheep station is on the Paroo River and had a 10 stand shearing shed. The bush in Currawinya looks in great shape even in such a dry season, it seems to have recovered over the last 25 years from sheep grazing. Currawinya is the largest National Park in Qld, some 1,500 square Km, and has just had a new section added which will be open in 2018. It would be a great place for a kayak or canoe, as the waterhole I am camped on is about 9 miles long and has yellow-belly to catch. 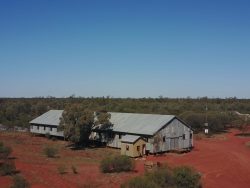 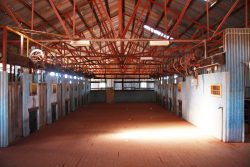 I visited The Granites, which are a granite outcrop in the middle of otherwise flat Mulga country, quite a surprise. They are a sacred site so you are asked not to climb them, as if I would, given how I feel about heights. 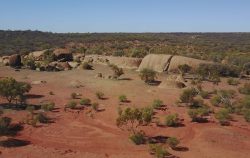 Today I went to the two big lakes, which are a RAMSAR wetland, and why Currawinya was made a National Park. They are a haven for migratory and other water birds but the fresh water lake, Numalla, is dry and the salt-water lake, Wyara has little water in it. It was a pity because when they are full they are a magnificent sight apparently. However the drive out and back was very enjoyable, a winding bush track through delightful treed country. 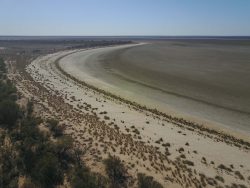 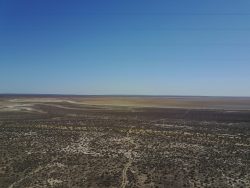 Afterwards I went to Hungerford and had a steak sandwich in the Royal Mail Hotel established in 1873, and is still the original corrugated iron building. You lunch choice was a pie, or a sausage roll, or a steak sandwich.  It was a Cobb and Co staging post from 1875 and is a classic old country pub, well worth a visit.  Two sisters, who would both shade me for years, run the pub. I bought diesel and your tank is filled by gravity from a big tank on a stand. The pub is the only business operating in Hungerford, which is right on the border of NSW.  The dingo fence runs along the border next to the town so you have to open the gate to get into NSW. 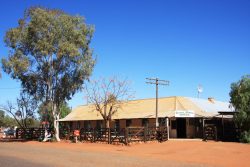 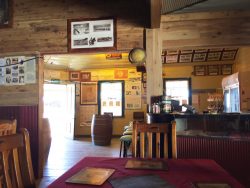 If you are interested, Henry Lawson wrote a short story on Hungerford, which was included in his book “While the Billy Boils”.  It is an amusing tale, typical henry Lawson, you can read it at: https://ebooks.adelaide.edu.au/l/lawson/henry/while_the_billy_boils/book1.6.html

Currawinya is a very peaceful park with only the many and varied bird sounds breaking the silence.  The camping area is at least 1 Km long alongside the waterhole with numerous camping spots.  I went for a walk one day along the waterhole and found only one other couple camping there, Mike and Jan, right up the other end.  They invited me for a cup of tea and we had a very relaxing chat for a couple of hours.

I am now in Bourke and will stay here for 4 days, not sure what I will do, but tonight I am going to the bush poet in the caravan park for dinner and entertainment.  If he is half as good as the last bush poet we saw here, it should be very good