On the last day at Balranald I went out to Redbank Weir on the Murrumbidgee, which had been inaccessible on my last visit as the road was flooded. The Redgum forest surrounding the weir is the second largest in Australia (and the world). Used the drone to get some photos, lost sight of it and had to use return home function. It landed safely right where it took off from. It was interesting at Mungo as the wind was quite strong and when I used the return home function its landing would have been off by a metre or so into a bush, so I had to interrupt the auto landing and move the drone and land it myself. 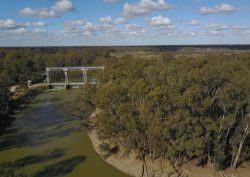 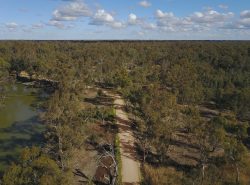 There is a swing bridge over the Murrumbidgee near the caravan park and 6 months ago the ends of the bridge were under water.  They are now 20 feet above the water.  The walk along the river has some interesting historical information signs and an interesting artwork 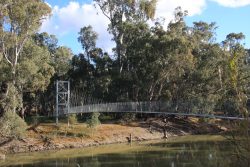 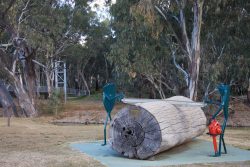 Next day I headed off to Mungo National Park via Prungle Mail and Arumpo Roads.  Prungle Mail Road was closed by rain 6 months ago, which is why I missed going to Mungo.  Very flat country and even the Prungle Hills that Burke and Wills had to cross were hard to see on the horizon.  The road was good and fairly straight with Mallee scrub for about half the trip. 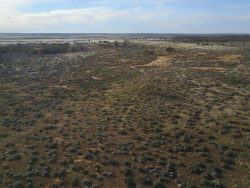 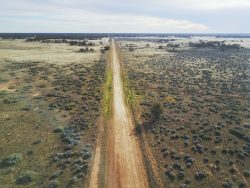 The campground at Mungo is much better than I remember with big camping bays covered with pebbles, many trees, relative to the arid area, drop toilets and rubbish bins. If you are lucky some bays have water and a covered table, I wasn’t. But every bay has a fire drum, BBQ and table. 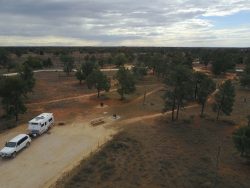 After setting up I went on a drive to Zanci Station which was added to the park in 1984. The original Gol Gol station had been divided into a number of Soldier settlement farms of around 16,000 hectares and Mungo and Zanci were two of these. Because of the small size, grazing was intensive and the park is still recovering, even though Mungo was purchased in 1978 and gazetted in 1979 as a National Park. At Zanci the homestead has gone, but there is the original log stables and a wonderful classic country dunny. 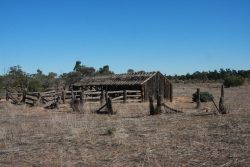 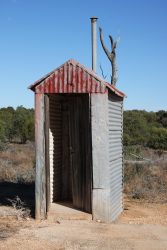 After this drive I went on a guided tour of the Walls of China on the eastern shores of dry Lake Mungo. It is here that Mungo Lady and Mungo Man were discovered dating back between 45,000 and 65,000 years, depending on what dating method is used. Mungo Lady is the oldest cremated remains that have been found worldwide. Mungo Man was covered in Ochre, which had to have been traded from Wilcannia around 100 Km away.  So he was an important person.  We were shown fireplaces dating back 50,000 years and found some emu shell shards in the hearth. Aborigines also used anthill stones to form a hearth and then would bury these under the sand and sleep over the top to stay warm. We learnt lots about how the aborigines lived and traded with adjoining tribes. To trade they had to learn the language of the other tribe as well.

The Walls of China were formed by the prevailing westerly wind that blew sand off the lakeshore to form a dune. When the lake dried out clay from the mud formed the next layer and on some pillars the base is orange, the colour of the mud. Later on, more sand was blown onto the dune to form the walls of China that we see today. Erosion has created the shapes. 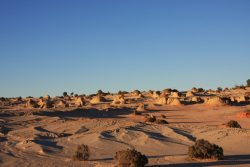 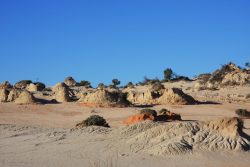 In 2010 Mungo received 25 inches of rain in one hour, which is amazing given the average rainfall is only 11 inches (280 mm). After this rain access to the park was not possible for 6 months and a number of roads within the park were closed for 12 months. The erosion gully in the photo was formed at this time. 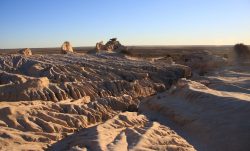 Mega fauna lived at Lake Mungo when the lake held water, but all the carnivorous mega-fauna were driven out by the aborigines, leaving only the giant Wombat, which eventually died out as well.  The wombat’s nickname is Ziggy, same as Nadine’s much loved ragdoll cat.  Ziggy was a truncation of its zoological name, Zygomaturus trilobus.

Behind the hard sand of the Walls of China are dunes of loose sand that are moving eastward at 0.5 metres per year. 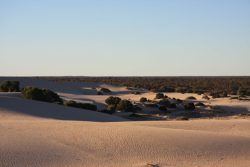 The next day I went on a self drive 70 Km tour of the park which was enjoyable and interesting, apart from the corrugations. The first part was through the lakebed of saltbush and then saltbush and scrubby trees which was a bit boring. But then the drive went through an extensive forest of Mallee and was really pretty with the road now being orangey-red sand. In this area is a short walk through the Mallee bush with signs explaining different aspects; it was a relaxing interesting walk. There is a remote camp in the Mallee forest with tables and drop toilets that you can use.  People who ride the loop on bikes usually overnight here, which breaks the 70 Km ride into two halves. 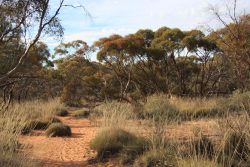 There are a number of “tanks” along the way which I presume were used to hold water pumped from underground, given the low rainfall and little hope of runoff. After the Mallee, it was back to saltbush country to Vigars well, which was a watering point for Cobb and Co coaches, which then had to travel over the dunes, not an easy task. Cobb and Co used to harness 60,000 horses a day around Australia at their peak. The well was dug in the area of a natural soak but has collapsed.  There are still soaks in the area and I was able to watch an Emu drinking from one of the soaks. The soaks are semi-circular sloping holes that you could imagine being clawed out by animals as the water receded. The Emu was sitting in the hole drinking until he saw me and ran off.  The thing that looks like the dead trunk of a small tree in the centre of the photo is the Emu, you have to believe me!

To the west of Vigars Well are the dunes behind the Walls of China that I saw yesterday from the other side.  As you drive up to them it looks like you are approaching an ocean shoreline. 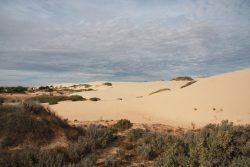 Today I was on the road before seven on my way to Broken Hill, and I was able to take photos of the sunrise over lake Mungo.  I had to take the photos as evidence, because no one will believe I was up and on the road that early. 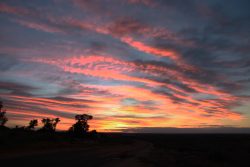 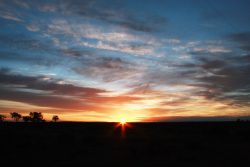 Sorry about the length of the post but there was a lot to talk about.