I started my journey at Royal Park where Bourke and Wills set off in August 1860.  Bit of a struggle finding a park for car and van but eventually I found one with a 1-1/2 Km walk to the cairn in Royal Park. 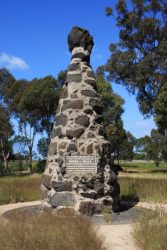 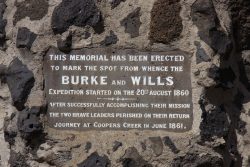 The expedition was enormous with 20 Tonnes of supplies, 18 men, 6 wagons, 26 camels, and 23 horses.  Getting this organised delayed the start until 1 pm so they only covered 6 Km to Moonee Ponds. 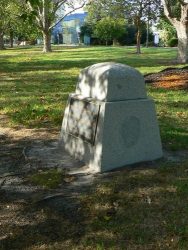 The explorers followed Mt Alexander Road and then Bulla and Lancefield Roads.  You cross a couple of blue stone bridges that Bourke and Wills used but there was nowhere to park for photos.  Camp 2 was at Bulla.  One bridge crossed Deep Creek and they had issues with getting wagons up the steep hill so they left 3 wagons to follow later, which they did and met up at Swan Hill.  The weather was wet and the crossing of the flat plains was a struggle in the black soil, and the camels were quickly losing condition.  Camp 3 was near the present village of Clarkefield and the Inn was a Cobb and Co staging place. 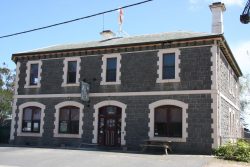 They also passed the Duck Hole Inn that still stands. 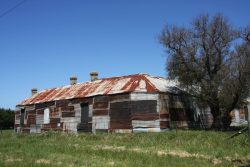 Camp 4 was near Lancefield but I couldn’t find the cairn.  They are travelling between 20 and 30 Km a day and found riding camels to be quite comfortable.  Camp 6 was at Mia Mia near Lake Eppalock and the tree below would have been standing at the time when they camped there. 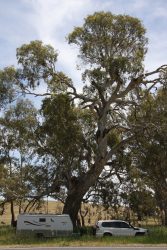 I had to drive around Eppalock, but the expedition was able to go straight across as it didn’t exist then. 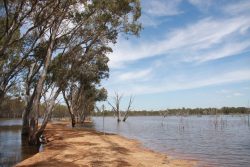 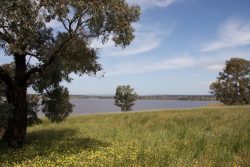 In the left hand picture you can see the O’Keefe Rail Trail which I think runs from Heathcote to Bendigo.  This section is built on an embankment to keep it above the water and you can see that Eppalock is full.  Lots of people visited the expedition from Bendigo and a local landowner provided a banquette.  I rejoined the trail north of Eppalock at Knowsley (Camp 7) when they turned north on an old bush road which travelled alongside the Campaspe River. They crossed the river on a punt which had sunk in February 1860, but the owner who also ran the nearby Inn had managed to refloat it, the previous owner had drowned in 1855 trying to swim to the punt in a flood.   Camp 8 was at Barnadown just before they headed north east to Terrick Terrick Sheep Station which was reputed to be the best in Victoria at the time.  I headed to Rochester for the night and will rejoin the trail tomorrow.  The map below shows my travels today. 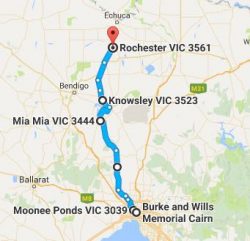