Visited the Eden Killer Whale museum today and found it well worth a good two hour visit.  Most fascinating was the relationship between the whalers and the killer whales.  The killer whales in three groups used to herd a whale back into Twofold Bay where the shore based whalers could then harpoon the whale.  Also a couple of whales would alert the whalers by swimming over to the whaling station and banging there tails or breeching to make loud noises.  Once the whale was harpooned it would take off and tow the whaling boat behind it until it tired and then it would be killed and towed back to shore.

What was really interesting was that there was a lead killer whale called Tom who used to lead the others and he would grab the harpoon rope and try to slow and tire the whale or grab the tow rope on the whale boat to pull it faster out to the whale.  His skeleton is in the whale museum and his first 6 teeth on the left of his jaw are worn down from repeated rope tugging and the seventh tooth has a groove from the rope about halfway through the tooth and on its way to being cut off short like the first six.  You may be able to see that in the photo of his skeleton below. 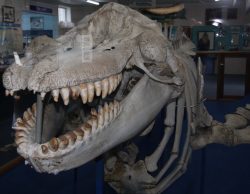 After an enjoyable visit to the museum I bought another serve of fish and chips (flathead this time) and consumed these overlooking Twofold Bay, no whales today, but I did enjoy the fish and chips.

On Saturday I went to Eden for the whale festival and met up with Jim and Jenny Ellis who had just come down to their holiday home at Wonboyn.  The festival had a parade which was mainly trucks and hot rods.  The truck drivers showed how they could manoeuvre and tip a truck and trailer in a confined space and log trucks deployed and retracted their trailers.  There were lots of sirens and horns blasting and kids with water pistols spraying the crowd.  A unique event.

Then everyone walked down to the wharf where there were lots of stalls and a band playing.  Through the afternoon there was to be other events and fireworks at night, but we decided it was time for lunch so we walked back up the hill to the fisherman’s club and enjoyed fish and chips.   Jim and Jenny invited me out to Wonboyn for dinner tomorrow so that will be good.

I have enjoyed the stay here and the caravan park has been quiet although this weekend has been busier.  I took a couple of photos of the beach that the park fronts and the creek alongside the park. 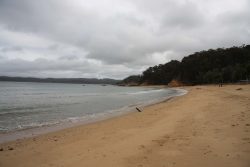