As mentioned, we are at White Beach.  Previously we were in Southern Tasmania and to get to South East Tasmania, we had to go back through Huonville, Hobart, then come down again.  The distances are not that far, but a few extra roads would be helpful. We have had to book in for 10 days.  We forgot about the public holiday and it was impossible to move up the coast, so it is fortunate that there is so much to do around here.  Apart from the beach being beautiful, with, as the name suggests, white sands, the caravan park is good, although sites are a bit snug.

We didn’t do much (except for shopping etc.) the day after we arrived, but decided to go to Lucky Duck for lunch on Monday, where I had my first curried scallop pie.  They are all the rage over here.  It was delicious. Russ has a lamb and pumpkin pie, with Middle Eastern spices, which also was delicious.

After lunch, we drove to Point Puer, in Crescent Bay Conservation Area, where we could see Cape Raoul, and its significant dolomite pipes in the distance.  It’s such a pity that Russ’s camera isn’t working, because his iphone didn’t take a very good shot it was so far away.  The weather let us down this day, being very windy and cold, so we headed home. 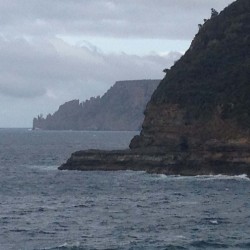 Next day a BBQ picnic was had at Lime Bay State Reserve, under duress though.  No tables, no BBQs, so Russ set up a little gas burner, on a piece of would, protected by half a trunk stump (to stop the gas blowing out), with the pair of us sitting on wonderful stools that Deen gave us.  Chicken shasliks and salad and we were as happy as, enjoying the magnificent camping area, surrounded by eucalypts, sheoaks, blackwoods, with lovely red breasted robins flittering around. 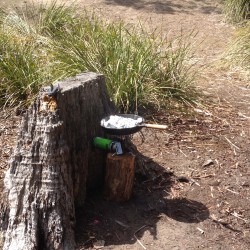 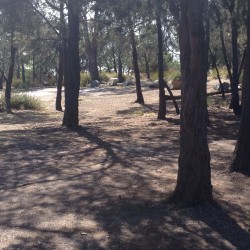 After lunch, we called in to see the Convicts Coal Mine ruins, where we walked to the main shaft and Russ walked further to see the actual ruins.  The convicts were sent there for punishment, because the conditions were worse than those at Port Arthur. 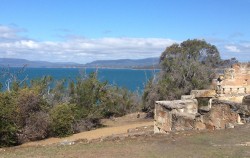 Yesterday we went to see the Tessellated Pavement, Blow Hole, Tasman Arch, and Devil’s Kitchen which all were spectacular.  There’s that word again, but the scenery and sights are really breathtaking here.  The coastline is incredibly rugged, with cliffs that are hundreds of metres high (at the Devil’s Kitchen).  We had fish and chips from the local mobile take away van at the Blow Hole – they must be making a fortune.  The fish and chips were excellent. 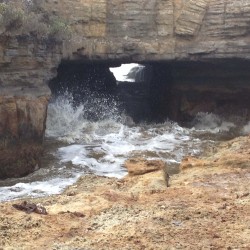 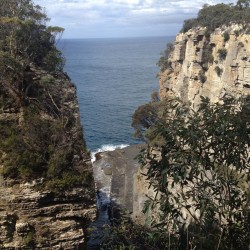 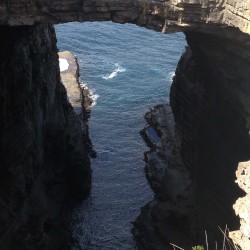 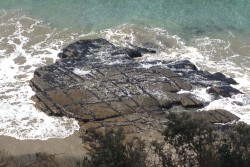 Today we went to Fortescue Bay, such a beautiful beach in the Tasman National Park.  There is a camping area there, where a school was set up, and we met some cyclists on the way in and watched another large group of kids having an absolute ball with their teachers, in the water, playing ‘keeping off’.  Squeals of excitement and fun, then a long line of tired kids, wrapped in towels, walking back to their camps for lunch. We have another 4 days here, some of which we might just spend doing crosswords etc. 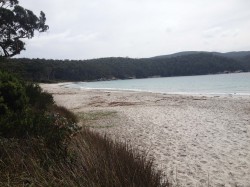