Will we go to MONA, or won’t we go to MONA?  That is the question!  The answer – yes.  So, Monday, we set off for the Gallery that has the nation divided!

We have our head sets, our iPod and are in the lift, pressing the button to Level B3.  Yes we start in the Basement, as the entire gallery is underground.  Entering the gallery, we are confronted by Gilbert and George’s ultra modern, way-out-there exhibitions, every picture approximately 25 feet by 20 feet, mainly in red and black and stating comments about fascism, shagging, accountants stealing massive amounts of money and others displaying their genitals and maybe their relationship – who knows.  The head sets didn’t give a commentary and the iPods gave minimal information, stating the name of the painting and the artist’s name.

Two hours later, after walking through all of B3, we had a delicious lunch at the cafe, then resumed our tour of B2 and B1, where we found the exhibits more interesting.  A red porche for example, remodelled out of fibreglass and looking like something out of the future.  Russ has just told me that this represented being ‘fat’.  It was a ‘fat porche’.  I missed that!

One amazing exhibit was a water feature that let droplets of water down in sequence.  Those droplets fell through projected light, against a massive standstone wall, forming different words every time.  Russ was able to photograph one word – ‘childhood’.

The building was amazing.  Some of the walls were pure sandstone, the lifts were circular, glass lifts.  There were different sounds as you walk through different galleries, as well as a dark tunnel, making it feel quite mysterious and eery.

Outside had a lovely view of the harbour, as well as some steel exhibits of an old cement mixer and other industrial vehicles. 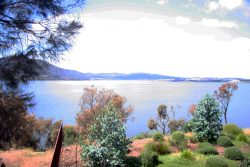 Tuesday was a very hot and humid day, so we did some shopping and then had a BBQ picnic at a lovely picnic area at Dodges Ferry.  The afternoon became very windy, enough to blow over our satellite dish.  Today we are moving to Huonville, south of Hobart, to a caravan park on a farm by a river, which has platypus in it.  Our site backs onto the river and we can have camp fires, so we we will set up our OzPig.