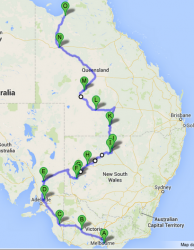 Well, we wanted hot weather and we’ve got it!  The caravan park (if you could call it that), is just dirt roads, no grass, everyone lined up, with trees at each site, thankfully – much needed for shade in the afternoons.  The temperature was 31 degrees when we arrived, the next day slightly hotter and yesterday was a very pleasant 26 degrees and cloudy.

There’s not a lot to do here, but the first day we had a lovely lunch at the Albion Pub, where Captain Percy Tresize drew a series of humorous painting on the bar room walls.  After that, we had a look at the very realistic, accurately reproduced replica of the largest crocodile (28 feet 4 inches/8.8 metres) ever shot in the Norman River, in fact the largest anywhere.  The Norman River is very wide at Normanton, and the old wharf is handy for taking photos being well above the height a crocodile can jump! 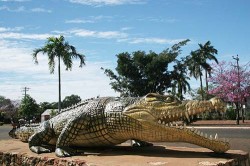 There are three pubs in town, 4 service stations, three of which are selling diesel for 187 cents per litre and the other 177 cents per litre. There are a couple of small supermarkets and a cafe.  We have confirmed our seats on the train and bus for tomorrow’s trip to Croydon.  The Normanton Station is a delightful old building, full of character. 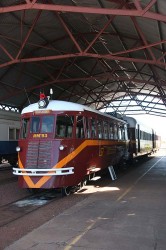 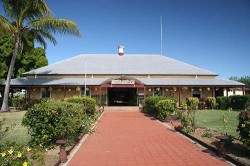 Today we went to Karumba, which is the most northern point of NW Queensland.  It was a lovely town, and that’s where everyone heads for a long time.  There were hundreds of cars and boat trailers at the boat launching ramp.  There is an on-the-spot fine of $250 if you are found swimming (because of the crocs.), but they don’t fine the fishermen, even though they walk out in the water to retrieve their catch.

We were recommended to go to Ash’s for fish and chips and we had the most delicious Barramundi, chips and potato cake, eaten in a gazebo, overlooking the mangroves, Alligator Point and the Gulf of Carpentaria.  It was absolutely beautiful, and the sea breeze reduced the temperature slightly.  It was perfect.

The Gulf and Karumba have only one tide each day because the narrowness of the gap between Cape York and PNG slows the tide wave allowing only one tide per day, except for a Neap tide once a fortnight.  The photos below explain this in more detail: 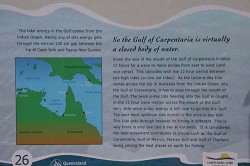 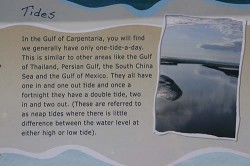