More to Say about Quilpie

It’s Sunday now, but last night, with the park is full to the brim (although it doesn’t feel crowded), we had our tea in the camp kitchen again and watched all the diners enjoying their beef camp oven, vegies, Johnny cakes, followed by custard and fruit.  We took our chairs around the fire just before their dessert and continued our conversation with a couple going to Birdsville for the John Williamson/Casey Chambers concert.  There are twenty four caravans leaving here tomorrow for Birdsvile.  It sounded very good, but will be very crowded. 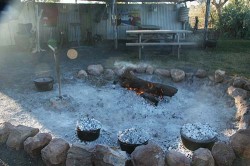 For the entertainment, they mentioned the ‘Quilbillies’ – we thought that could be good, so we stayed around to listen, little knowing that WE, and the rest of the audience, were the Quilbillies!  We all took turns to play two lager phone, the spoons, two bush basses and two heavy pieces of wood to clang together – I don’t know what they were called. We all had a ball.  Eleanor is a real character playing the bass, with her foot up on the bass box – Russ adopted the pose later in the night.  you can tell Russ is a Victorian, he was the only one in shorts! 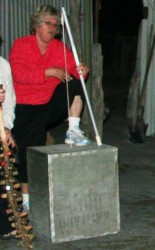 People out here certainly know how to put on a good night.  The park is filling up again, so it looks like another fun night tonight.  We’ll be sad to leave in the morning.  As we said in yesterdays post, the entertainment and cooking is managed by Ian, a very capable cook and host, who, with his wife Eleanor, provide great meals and a comfortable and enjoyable environment 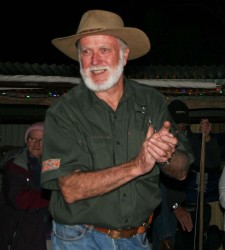 2 Comments on More to Say about Quilpie