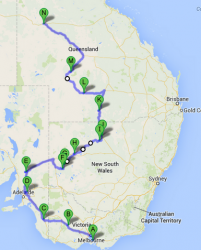 It is Thursday the 10th July and we have just arrived in Cloncurry, booking in for two days.

Our first night after Quilpie was Jundah – a very tidy, tiny town, where there is a caravan park with six powered sites and a brand new
toilet block in the adjoining park.  You can tell the people have pride in their town, which is very green and immaculately clean.  There is a ‘classic’ General Store there.  Once you enter, you are immediately taken back to your childhood – walking into the little grocer’s shop, with every imaginable product on the shelves.  We went looking for Wraps, and what did we find?  Helga’s wraps, on special! 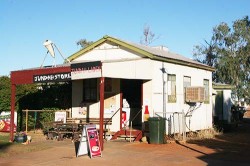 On the way to Jundah, we had lunch on Cooper Creek – it can’t get much better than that. 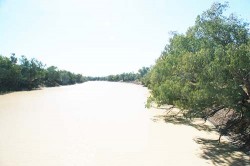 Next day we set off for Winton, where we booked into a very average caravan park for two nights, the other caravan park was even more average.  On our second day, we had a wonderful day out, visiting the nearby Bladensburg National Park.  We were going to stay at the park, but the nights have been freezing.  (The days are now 25 – 27 degrees, the nights are about 1 degree).  We had previously gone to the Information Centre and picked up a guide brochure, giving points of interests along 50 kms (approx) trip and we saw the homestead, which was beautiful.  It had verandahs on all sides and the walls and the ceiling had lining boards on the inside and exposed studs on the outside.  There were many outbuildings and a very substantial shearing shed. 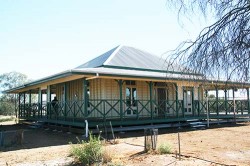 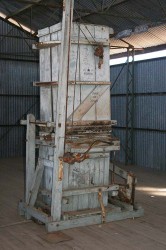 On the drive we visited several waterholes, one of these was Skull Hole where there had been a massacre of aborigines. 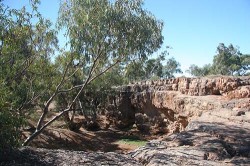 We also visited Engine Hole where there were lots of Budgerigars, we looked for their nests but  we only saw flocks of them on the wing, both on the drive and at the water hole. 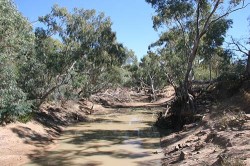 We drove on to the Camping area, on Surprise Creek.  This is where we would have camped – a lovely spot, well set up, giving people plenty of room, with a couple of pit toilets.  We met up with a couple of campers there, in a Kimberley Caravan, so we spent a couple of hours chatting and enjoying their company. 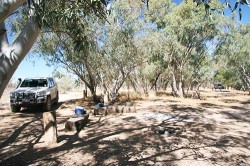 We will be here for two nights.  It’s good to stop – the travelling is very boring for hundreds of kilometres and the condition of the roads vary enormously.  We have been on bitumen since Bourke, but it goes from being a two-lane width to one-lane width, and on the main highways, there are grooves in the bitumen, from the road trains.  When you have to move off the bitumen, the edges have been very rough, with a 3″ drop from the bitumen to the dirt.  The road trains are 53.5 metres long, fortunately we haven’t had to pass one yet!

We are going to Normanton on Saturday, where, on Wednesday, we will take the Gulflander Train to Croydon and a bus ride back from Croydon to Normanton.