We dropped down over 700 metres off the Atherton Tableland and we are now surrounded by sugar cane, palms and a lovely beach. Swimming is not allowed because of stingers and crocodiles, although no-one has seen either. We are in a nice park – people have quite large sites, which is quite different to a lot of parks on the coast.
We have Innisfail to our north and Tully (Australia’s wettest area) to the south. The second day we drove into Tully and bought fish and chips and sat in a park, which displays Tully’s symbol – a large gumboot! Inside the boot, you can walk to the top and look at an overview of the city and surrounding mountains.
We are here for a week and there is not a great deal to do, but we have been preoccupied with a major problem with the van.
It is leaking like a sieve. When we arrived, the bed was wet and as the day went on, water was coming in from the seams in the roof, around the air conditioner, as well as around the sky light in the bathroom. This started the night before and we were visiting the loo with our feet in puddles.
We were completely pissed off and both wanted to come home, then get it fixed and then maybe set off, but we are thousands of kilometres from home and we are meeting up with Trish and Dave on the 6th August, so we have to cope with the situation.
We went to Innisfail and bought a tarp, but we decided to lower the front of the van and let the water run off, as it seems that the water pools in a large dip in the roof. This worked well until the water started dripping through the pop rivets over the bed and we were drying out bedclothes again, drying the mattress with a heater, so option two came into play, by lowering the van at the back.
Last night we had a dry night, so fingers crossed.
Feeling more optimistic, we went out for lunch at a nearby beach, Kurrimine Beach. There are three caravan parks, a large pub, a beautiful stretch of beach and our time was very relaxing. Spanish Mackerel is the fish of the day up here and it is white, fleshy and delicious. 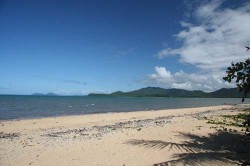 Yesterday our neighbour gave us some spotted emperor, which I had to fillet and crumb. I made some salad and tartare sauce and we had a lovely tea. Maybe things aren’t so bad after all!