This blog will be a condensed overview of the last few days, but we just HAVE to do it.

First stop was at Wangaratta, where we were lured to a caravan park, on the banks of the Ovens River.  Little did we know, that if we’d been a week earlier, the river would have been lapping around the chassis!  What a mess, poor things.  To make matters worse for the owners, this is the ninth flood in 34 months.

Then we went to Grenfell, booking in for a couple of nights.  The next day we visited Seaton’s Farm in the Weddin NP. This was an excellent example of farming at its hardest.  The fences were constructed from wire scrounged from where ever possible and sheds built from flattened corregated iron (to make it go further!).  The house was made out of second hand materials, with earthen floors, very few windows. Mrs Seaton used to sprinkle tea leaves on the floor, to keep the dust down. 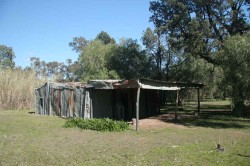 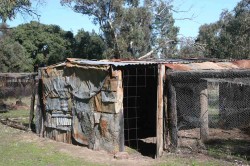 Later on when I was in hospital, a nurse was telling me that she grew up in a house with dirt floors, that became as hard as rock and that her mother used to sprinkle flour over the floor at night – to see if any snakes had come in for warmth!

After the farm, we BBQ’d at Ben Hall’s Cave picnic and camping area, enjoying new tables and gas bbqs, on a beautifully sunny, but cool, day.  Russ walked up to Ben Hall’s cave and I looked for orchids.  We returned to our camp, and the rest is history!!!!

On our way to Cootamundra, we called in to Cowra.  Cowra is where all the Japanese second world war prisoners were confined.  Later on, in the eighties, the Cowra Japanese Gardens were opened.  They were absolutely beautiful.  We ended up having lunch in the cafe, dining on tempura prawns, vegetables and miso soup. 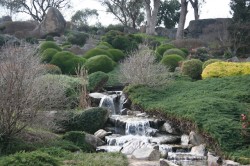 We are now on our way home, last night staying at Cootamundra, in the smallest cabin that town planning would permit and presently are at Wagga, in a much more accommodating cabin.

Tomorrow we go to Wangaratta and then home.

This is from Russ: We really appreciate all the loving and caring emails and SMS’s  we got after Marg’s accident, Marg said they helped the healing process.  They also reinforced our belief that it is friends and family that are at the core of what life is about.