Headed North to Bridport, through roads that climbed and wound their way through the most stunning Myrtle rainforests, until Scottsdale, where the road straightened out, and we arrived at Tassie’s Rosebud equivalent foreshore camping, named Bridport.  This place would be buzzing at Christmas and Easter and every public holiday and we have a site in the front row of the foreshore.

Went to the Waterhouse Conservation area, but couldn’t stop for lunch, because it was blowing a gale, but we eventually found a sheltered place at a ‘shack site’ – houses have been built around Lake Waterhouse, without permission, but have been allowed to stay.  We took advantage of their newly built table and were pleased to have the protection of their sheltered area. 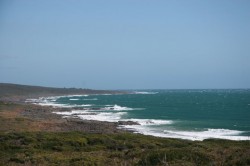 After this, we moved to the Narawntapu National Park.  The peak period has finished with Easter and there are only a fer campers at this lovely park.  Once a farm, it has a large grassy area (called Springlawn Camping area), where very healthy, large wombats graze morning and night.  No water, but power, and just as well, as the overnight temperature on our first night must have been 2 or 3 degrees.

The park is well set up with BBQs and tables under shelter, well constructed paths and septic toilets.

We walked to the lagoon, where there is a bird hide on the way and if you continue, you can do a circuit of the lagoon.  We went half way, only to find a large, fiesty tiger snake in some bracken, but with his head in a striking position, we decided to ‘go bush’ and detour around him.  Once back on the path, with adrenalin flowing, his size increased and so did the story of our near death experience!!  However, he was the same diameter as Russ’s wrists and looked to be 1.5 to 2 m long, it was the biggest Tiger Snake we have seen by far 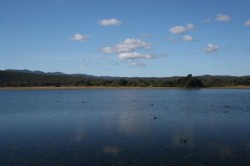 We BBQ’d at the NP picnic shelter area that night and watched the water coming into the inlet, with Mt Roland in the distance.  Very relaxing.  Mt Roland dominates the scenery in this part of Tasmania, a massive mountain of rock, earlier in our trip we camped at Gowrie park at the base of Mt Roland. 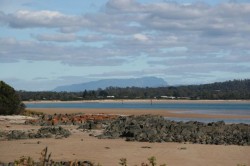 It’s nearly time to catch the ferry back to Victoria, so have moved into Latrobe Caravan Park on the Mersey River.  Yesterday we went to Sheffield to see the murals and were confronted with people everywhere, blocked off streets and no parking to be had.  Saw some amazing murals, but too many people to really get a good view.  Drove on to Lake Barrington – a further 28 kms, hoping to find a table to have our lunch.  After more than two kilometres of descent, we turned the corner, only to find about 500 cars and a rowing regatta going on!!  Took a dirt track down to the lake and opened a bottle of sparkling burgundy to have with our sandwich and had a great time in a beautiful place.  No table though. 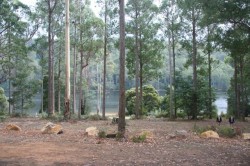 This will be the last post for this trip.