The caravan park is crammed full of long-weekenders, but we are lucky and have a end of row site, with a tree!!  We set up our camp, sat outside in the shade and thought about Tassie’s roads – expect ups and downs, arounds and abouts.  Slow down and eventually you’ll get there in the end – as long as a large milk tanker, or similar, isn’t coming the other way.  There is a remarkable lack of guard rails as well!

In the afternoon we went to the magnificent ocean beach my brother had asked us to see – not enough sun to take a photo.  On the way back, we turned off to Macquarie Heads and camping area.  It must be a great fishing spot, as plenty of people had driven their cars (even 2wds), onto the beach and looked as though they have been doing this for years.  There was a light house in the harbour, before the heads, and another at the heads. 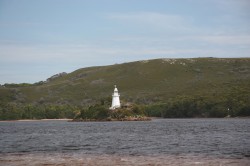 We had our tea overlooking the Macquarie Harbour Beach, where families were enjoying the balmy weather.  The beach was ideal for children being only knee deep for about 15 metres off shore.

All the campers have moved out this morning, and I mean all, only 3 camps left out of about 40!!  But it will probably be full again by the end of the day.  Today we went to People’s Park and walked to Hogarth’s Falls – another temperate rainforest walk, taking 45 mins return, with falls flowing at the end.  I managed to pick up a leech, which decided he’d had enough of me after our BBQ and a lady from Launceston put some metho on it for me, to stop it being very itchy tomorrow.  Peoples Park is a beautiful area with a few large trees in a grassed area surrounded by rainforest. 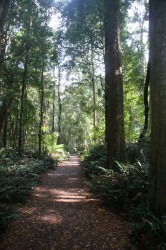 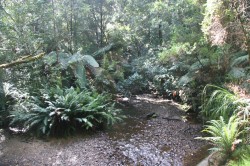 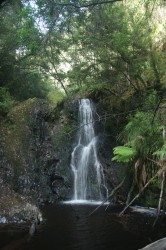