We have booked into Mt Field National Park – a magnificent forest of extremely tall swamp gums – moss all over the fallen logs.  There is also Myrtle (Antarctic Beech), Blackwood, Leatherwood and very tall and extremely old tree ferns.

The area at the back of our van is like a garden, of mossy grass, ferns, taller grasses, then an embankment of all the trees mentioned.   In this forest there are little Pademelons and birds, like swamp hens, also eastern Quolls, yet to be sighted, and loads of little birds in the trees. 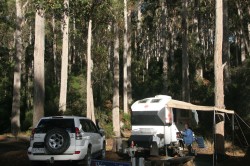 The weather changes continually.  It is only 200 metres here, (compared to Lake St Clair, where we were at 740 metres), and probably 6-9 degrees overnight, rising to 17 degrees, at best, although last night was 3 degrees.  Sun appears in short bursts, just to give you a little confidence, then in rolls the clouds, drops of rain and lower temperatures.

There is a BBQ shelter, with gas BBQs, so this morning we went over and cooked an egg and bacon on Cribbs muffins – Cribbs muffins are a real find!!  Delicious, good sized muffins, that crisp up deliciously on the BBQ.  Cribbs is a Tasmanian brand, so we are hoping to find them on the shelves in Melbourne.

Before lunch, after all the showers and washing was done, we set off for Russell Falls.  Through an extremely old, moss covered damp forest, with massive trees, regularly on the path we passed giant treess that had fallen, wiping out everything in their paths.  These tress could be well over 1 metre in diameter.

The falls were approximately 50 metres high, coming from a tributary of the Tyenna river.  The track was a bitumen path wandering through moss covered logs, with a beautiful little creek, with crystal clear water, along side.  We could see trout swimming in the water. 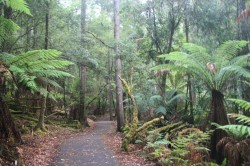 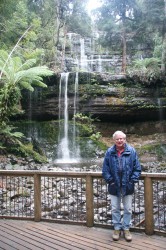 I returned to the car, while Russ climbed up to Horseshoe Falls, 100 metres upstream from the Russell Falls and a further 15 minute walk, up steps with a 45 metre climb.  There’s also a photo from the top of Russell Falls near the top of the climb. 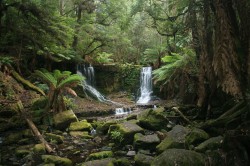 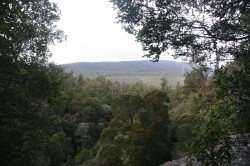 I’m making a pizza tonight, although supplies are running low – shops are few and far between.