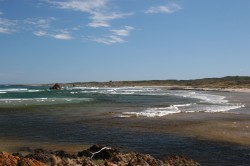 Two magnificent days at Arthur River, a magical spot in Tassie.  Disappointed with the caravan park – a paddock with two toilets per gender – but is only the place where we sleep, after all.

The first day we went to “The Edge of the World”.  A breathtaking view of the Southern Ocean, where it is 15,800kms to the next country, South America – too far south and missing South Africa by 300kms!  They have done a great job of providing toilets, a track out to the view over the rocks, seats, and a picnic area, which of course, we came back to later on to have something to eat.  Very windy on the paths, but very sheltered in the enclosed picnic area.  The amount of large driftwood, looking like matchsticks, tells of savage seas and winds. We booked in for our cruise up the Arthur River at the General Store and came home eager with anticipation.

Next morning, 9:30am, we boarded the Red Boat – The George Robinson.  Everyone said to make sure you book the red boat!!  The Captain, ‘KG’, had a great sense of humour and Greg, who has two degrees in Environmental Science and a love for history.  Between the two of them, we had an extremely entertaining day.  At 10am we set off on our 28km journey, starting off with heathland on either side of the river, then it moved dry Eucalypt forest and then in a temperate rain forest.  This is known as The Tarkine region. 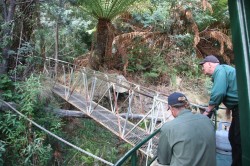 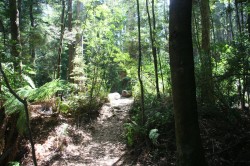 The Tarkine’s old-growth rain forest is a relic from the ancient Gondwanaland and is one of the most significant temperate rainforests on earth.  It is one of the most impenetrable forests, mainly because of a plant that can’t support itself – growing, then falling, putting down supports, growing up again etc., then this lattice effect is continued, sometimes over gullies or large crevices, making it very dangerous for anyone to attempt to walk through.  This plant is called ‘Horizontal’.

This area is home to the Giant Freshwater Crayfish (grows up to 1 m long) and the Tasmanian Wedge Tailed Eagle, the largest eagle in Australia. We saw a family of sea eagles, and Russ captured a picture of the mother eagle (who is  50 years of age and still breeding, with her toyboy partner of 19 years).  The lifespan of a Sea Eagle is expected to be 55 years.  We also saw a snake swimming across the river – one of the three specied here – copperheads, tiger snakes and the green whip snake. 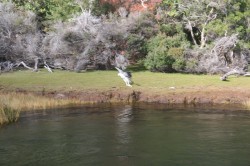 Our BBQ in the rainforest was extremely good – the amount of trouble they go to to provide everyone lunch was great.  While KG was cooking, Greg took us on a wander through the forest, stopping to talk about the trees, the history and everything about the place he loves most. 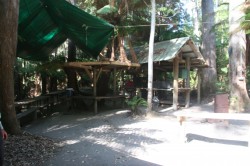 We were treated to seeing a family of the cutest Quolls.  They scampered around us, grabbing little bits of sausage with their razor teeth, and running back under the ferns again.  A pademelon was far bolder, looking you directly in the eye and moving on to the next person. 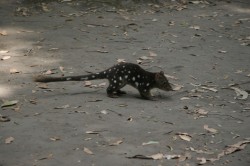 After sausages, hamburgers, large range of salads, bread rolls, wine, water or cordial, we were back on the boat, I was asked if I would like to drive the boat.  I jumped at the opportunity and enjoyed steering around all the bends.  It’s not until you steer that you realise how many bends there are! 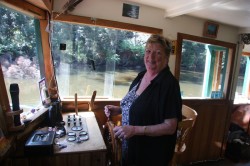 We headed off to Zeehan the next day via the north coast and the Murchison Highway.  To call it a highway is a liberty, enough hairpins to stock a blue rinse hairdressers!  Plus lots of long steep descents and ascents.  We stopped at Hellyer Gorge for lunch, a beautiful peaceful picnic area in the middle of the rainforest.  It was the scenic route, but took us 6 hours for less than 300 Km.  We dropped into Waratah to see the falls and then into Zeehan.  Zeehan is an old mining town with lots of cheap company built housing, but the town hall and music hall are rather grand old buildings. 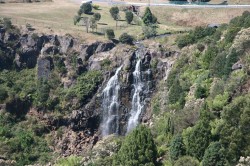