Having a great time at Western KI Caravan Park which is very well managed.  It has lots of trees and a couple of bush walks to enjoy.  Our site has a garden of bushes and trees separating it from the next sites on each side.  Every day lots of wallabies and kangaroos appear and the numbers increase toward the end of the day, a number of koalas are also in the park together with lots of birds.   Yellow tailed cockatoos make a wonderful noise in the evenings as they roost in their favourite trees 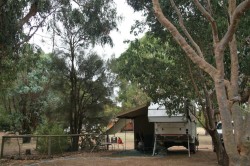 I set off for a short bush walk in Flinders Chase NP (Snake Lagoon Walk) and I took our satellite phone so I could contact Marg if there were any problems, we are a bit more careful now after Eric went missing.  However the phone didn’t work when I tried to ring from the car-park at the start, as I had promised.  I later found out that Telstra had not reinstated the service after we had suspended the phone service for 3 months last March, so it didn’t work. We had been travelling the outback last year blissfully unaware that our emergency phone was useless!  Anyway I decided to walk the first third to Rocky River and then walked back and went home. 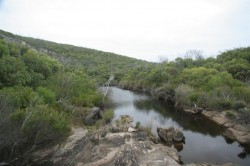 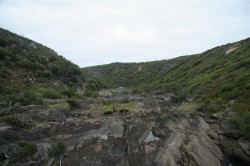 On the last day at Western KI (Friday) we went to Rustic Blue Gallery and Cafe for a light lunch, which was an excellent platter of Antipasta.  The gallery was excellent as well with lots of paintings, sculptures, jewellery, tribal instruments, etc.

We got some bad news from the UK learning that my brother was in hospital, critically ill, he has had prostate cancer for a few years.  So we left Western KI hoping to find a campground on the south coast that had 3G reception.   We had a breakfast BBQ at Kelly Hill Caves (bacon and eggs), which were excellent – steaky bacon and free range eggs, I forced myself to have two eggs!  On the way to Kelly Hill Caves, we called in at Hansen Bay for a look. 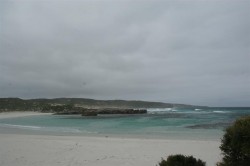 On to Vivionne bay but no 3G. The camping ground is quite formal in layout, but some nice trees in the centre plus showers, toilets and a gas BBQ.  We had planned to re-visit the beach, but missed seeing the west end of the beach that Rob Youdan had told us had some beautiful rock formations and small pools that are apparently used in advertising shoots.  The road looked very narrow and rough and maybe we would not be able to turn around at the end.

So on to Murray Lagoon, again no 3G, but the lagoon was only visible in the distance from the campground, and the camping area was basic with few trees, boring says Marg.

Moved on again to Flour Cask Bay Sanctuary, which has accommodation and also allows camping, again no 3G.  So on to American River, at last 3G.  So we paid for 3 nights and set up camp ($10 for a power site!).  It is a council park and has absolute water frontage plus septic toilets, hot showers, electric BBQ and a number of tables and shelters.  It’s very relaxing here and well worth a visit, but only a good, but limited, General Store. It is also quiet with only two other camps here today.  There is a cafe, but it was closed for the weekend as the owners went to Kingscote for the racing carnival.  Also an oyster bar, but it doesn’t open at weekends!  Maybe we will check them out tomorrow. 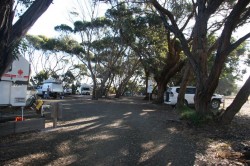 It is great to be able to eat our meals outside or in a shelter looking over the inlet.  Today (Sunday) has been a quiet day, but we enjoyd fresh Calamarie that a fellow camper gave us yesterday.  Marg breadcrumbed them and they were delicious with salad, full of flavour and not chewy. 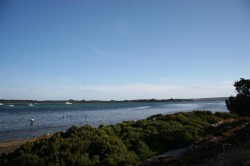 We have booked our return ferry trip for Tuesday, so sadly tomorrow will be our last day on Kangaroo Island.  It has been a wonderful 3 weeks.  We enjoyed staying at the west end of Kangaroo Island and travelling along the south coast, as these ares have been much less cleared with lots of bush and lovely trees along the roads and in the paddocks.  Also much taller gum trees in places.  In contrast, the north and east have been cleared with bush only in reserves and conservation parks.