We spent 3 nights in Victor Harbour, through a heatwave that sounded as if it was across  the entire southern half of Australia.  Victor Harbour is a town with a great feel to it, many very characteristic old stone buildings and houses, a beautiful coastline, a main shopping strip, but a big Woolworth’s complex and Coles, as well as their industrial sector.

We had planned to take the steam train to Goolwa, a 17kms journey, to buy fish and chips, but we couldn’t find any information about leaving times or ticket prices, and seeing that the temperature was 39 degrees, we thought that it would not run as the brochure stated that there would be no service over 34 degrees.  We drove there instead, found a pub and had our fish and chips in the cool air conditioned pub for lunch.  Yeh, yeh – we’re getting soft.

The next day, we discovered Port Elliott, as did a million others!  No parking for about a Km around the beach.  A surf carnival was underway, situated on their beautiful beach and surrounding the Flying Fish Restaurant, where we had intended to dine.  After parking a long way from the venue, we arrived and were ushered to a great seat, overlooking all the action and enjoyed another delicious meal, with entertainment to boot!

We also visited Newland Head Conservation Park, really for an excuse to be in the car with airconditioning.  We had a picnic that lasted about 30 minutes, due to the strong, hot north wind.  The scenery was spectacular, but it was too hot for any degree of comfort.  Back home to an air-conditioned caravan.  Yeh, yeh we are definitely getting soft. 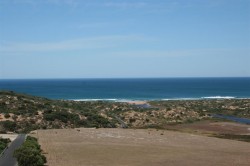 We have dined out more than usual this trip, as, after reading and seeing programs about Kangaroo Island, we decided to make it a foodie trip.  It hasn’t helped my waistline and I have a lot of work to do before Cam & Mel’s wedding.

We spent one night at Pembleton Farm Stay, just out of Keith SA.  It was a typical SA sheep station, but had a lot more trees than usual.  They are well set up for conferences as well as campers, but we found the messages about loving the Lord a little imposing!!  As you can see from the photo, we had the place to ourselves, which was great. 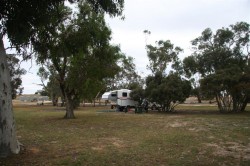 We are now in Stawell for 2 nights. The weather is much cooler, in fact, today jumpers were required.  We are staying at the Grampian’s Gateway Caravan Park, which has, what we think might be, a billabong of the Wimmera River.  There are ducks, water fowls, cormorants, plovers, which appear to be nesting, as well as lorikeets, cockatoos, egrets – the whole kit and caboodle. 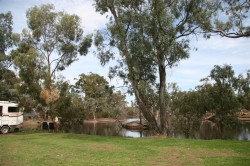 Today we went to see the Grampians, firstly to Pomonal, where Russ’s paternal grandfather lived on a small farm after he retired, about 1940. The block was owned by his son Jim, who had left for NSW to start a dairy farm on better land.  The redeming feature of the block was wonderful views of the Grampians.  In his 70s he still rode approx. 30kms into Stawell for supplies, on his bike, and he must have been tough, as we found the going rough in a 4WD in one spot!  So tough that he once pulled a tooth with a pair of pliers and a 3″ nail.  Not sure what the nail was for!  There wasn’t a remnant of his past, but we took a photo just the same. 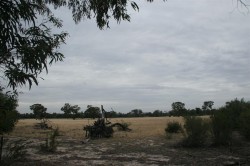 We are looking forward to going home and we are enjoying being back in Victoria, where the land isn’t as parched, or cleared.  It is great to see forests again and trees along the roads and in the paddocks.

Thanks for reading the blog – it hasn’t been diligently attended to since the bad news from the UK, regarding Russ’s brothers passing.