Still in SA, we camped for two nights at Kotjee Campground, in the Canunda National Park.  Great campsite, with fireplace, table and a grassed area around our van and our hopes raised for a good stay, ever in search of that elusive orchid.

Followed a sign to Boozy Gully (thought we’d know our way there) and found a group of onion orchids, which were easier to photograph this time.  Unfortunately, the walk ended at a road directing us to “cliff top” and the road seemed to go on forever, so we returned to camp. 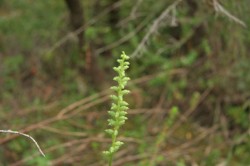 Decided to drive the rest of the way to “cliff top”,  to a beautiful ocean vista.  Evidence of past aboriginal life with massive middens – sea snails must have been the delicacy.  Watched a cray fisherman tending his pots (in a very small boat in very big swells).  Priced the cray on the way home and at $72 kilo, gave it a miss.  Bought some beautiful flathead though, which I cooked in the Cob. 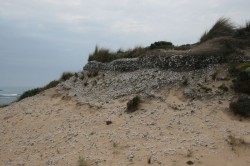 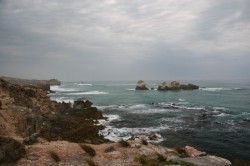 In 1876, an iron-hulled sailing ship, The Geltwood, made its maiden voyage from England to Australia, but was wrecked in a fierce storm, with the loss of everyone on board.  The Geltwood camping area was right on the ocean, but the massive numbers of millipedes and ants, plus the depressing amount of weeds made us decide to continue to Nelson.

We are in a favourite place of ours.  We call it “the Mallacoota of the West”, but I’m sure the locals of Nelson would be offended that we compare it with anywhere.

We were surprised to see a strange street sign “Isle of Bags Road” but found out that Major Mitchell thought he could store his supplies safely on a tiny island in the Glenelg River.  He was disappointed to find that he was outwitted by the aboriginals, who quickly seized his goodies. 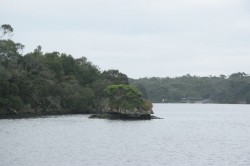 We are staying at Kywong Caravan Park, which is full of native trees, good sized sites (some drive through), others tucked away in the bush.  We are only minutes away from the National Park.  There is a ‘good feel’ about the place.

Drove into the park for lunch at Forest Camp – a most idyllic setting, with BBQs, tables, wrens and yellow breasted robins, to name a few. 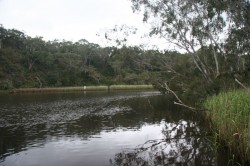 The next day we drove to Discovery Bay Coastal Park (Lake Momibeong).  It seems the lake hasn’t seen this much water for a long while, as the jetty was submerged by 200ml.  Continued to drive on to Saunders Landing on the Glenelg River, to have a wonderful lunch.  Again the area had been set up for picnickers, or boaters, with BBQs, tables and toilets.   Last night, I made rolls in the Cob, as we were sick of  trying to convince ourselves that stale bread was OK! 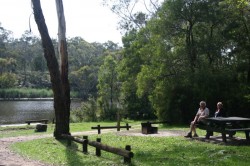 We are staying here for another couple of days.  We both love it.