Off again, for a bit longer this time!!   Arrived at an idyllic setting on the Wimmera River in the Little Desert National Park.  375km northwest of Melbourne, we are on the eastern block, from Dimboola.  We have stayed a few times in the other end of the park at Kiata, but this has the added bonus of the river. 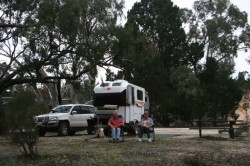 There are many walks from here, mostly strolls to Horseshoe Bend and the river.  Talking to other campers, the fishing hasn’t been good, unless you want to watch Carp – at the lookout over Horseshoe Bend, you can see hundreds of Carp sucking off the algae at the edge of the river.  What hope does the Redfin have or other native fish? 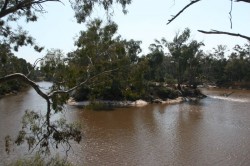 We went to see the weir, which was damaged in the recent floods this year.  The photo shows the walkway well above the ground level.  Temporary earth fill on the left side of the photo has allowed the weir to function.  The electric box was destroyed and a small fire resulted, further damaging the structure. Lynton may remember an old photo of his Dad walking across the previous timber weir, during a drought. 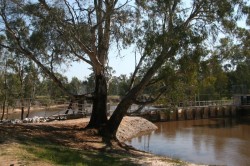 The weather today has been frightening and as I type a massive gust came through, swirling white sand into willi willi’s and everything is covered in grit.

That’s all for now.  We are having fun!!